China builds 10 new airbases along the Line of Actual Control 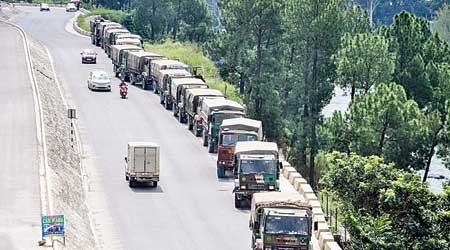 China appears to have built at least 10 new airbases along the Line of Actual Control in Ladakh, Uttarakhand and Arunachal Pradesh besides ramping up infrastructure at its exiting airbases close to the Indian frontier, sources in the security establishment have said.

The latest assessment has strengthened the suspicion that the Chinese have been using the time afforded by the ongoing talks with India to buttress their positions in the “occupied” zones in Ladakh.

“Intelligence reports suggest the Chinese have built at least 10 new airbases along the LAC in Ladakh, Uttarakhand and Arunachal Pradesh. This is very serious considering the 16-month-old border standoff in eastern Ladakh,” a security official attached to the Union home ministry said.

He said the Chinese army had earlier built additional military camps as well as watchtowers with CCTV cameras atop them inside India-claimed lines in Ladakh to monitor Indian troop deployment.

“It’s a matter of extreme concern the way they have been ramping up their military and air force infrastructure close to the LAC and also inside the occupied zones,” the security official said.

“It’s apparent that the Chinese are bolstering their positions while talks are under way to resolve the border standoff.”

On the strategically crucial Depsang Plains, the Chinese are said to be entrenched 18km inside India-claimed lines.

Military veterans suspect that China wants to establish a new status quo at the LAC, claiming the territory occupied since May last year as its own. They have flagged with concern the long absence of any reference to “status quo ante” in the official statements issued after each round of talks.

Defence ministry sources said India’s military preparedness along the China frontier was being reviewed regularly. India has carried out mirror deployment at the LAC to match the Chinese, moving in additional troops, artillery and infantry combat vehicles, and is conducting regular aerial surveillance.

“The defence top brass have been conducting regular meetings to discuss infrastructure and capability development along the LAC,” a ministry official said.

India has been building 73 roads of operational significance along the China frontier, he said, but at a far slower pace compared with China’s rapid expansion of military infrastructure in the region.