So far, there has been 'partial' disengagement from the Galwan Valley, Pangong Lake and Gogra through the creation of a demilitarised 'buffer zone' 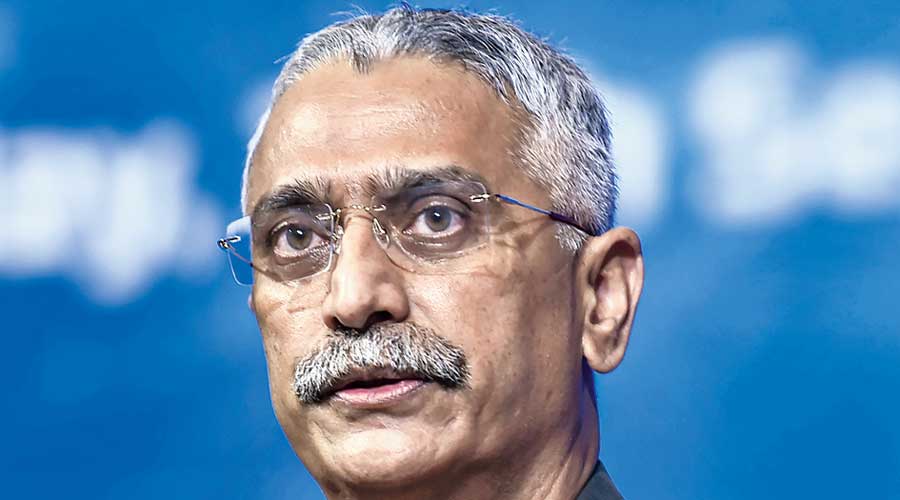 Army chief General M.M. Naravane arrived in Ladakh on Friday on a two-day visit to review security and operational readiness along the Line of Actual Control amid the border standoff with China since May last year.

An army statement said Gen. Naravane would review operational preparedness and interact with the troops deployed in harsh terrain along the China frontier.

“The army chief will be given a detailed briefing about the ground situation at the multiple friction points in Ladakh,” a defence ministry official told The Telegraph.

General Naravane had on Thursday said the incidents with China along the unmarked border would continue until the two countries found a long-term solution in the form of a boundary agreement.

China’s army is estimated to have taken over close to 1,000sqkm of India-claimed territory since May last year.

So far, there has been “partial” disengagement from the Galwan Valley, Pangong Lake and Gogra through the creation of a demilitarised “buffer zone”.

This means the Chinese have stepped back a few kilometres while still remaining within India-claimed lines, and the Indian troops have retreated by an equal distance — a move some veterans have criticised as “ceding more territory” to the Chinese.

An army official said a Chinese pullback from the LAC would be the first step towards restoring peace, but added that Beijing was showing no inclination to do that.

Since last winter, the Indian Army has established habitat facilities for its nearly 50,000 additional troops deployed along the LAC. Never before have such huge numbers of additional soldiers been posted in the forward areas of the LAC, at altitudes of 12,000-14,000ft where temperatures can dip to minus 40°C when the winter peaks.

The Indian deployment — backed by battle tanks, missile systems and frequent sorties by the air force’s combat aircrafts — is an effort to match the massive Chinese build-up along the LAC.

Asked about the situation along the LAC in Ladakh, a defence ministry official said: “It’s the same as last year. There is no change in the status quo.”