Not jobs alone, nothing has been done for education and healthcare either, RLSP leader says of Nitish govt 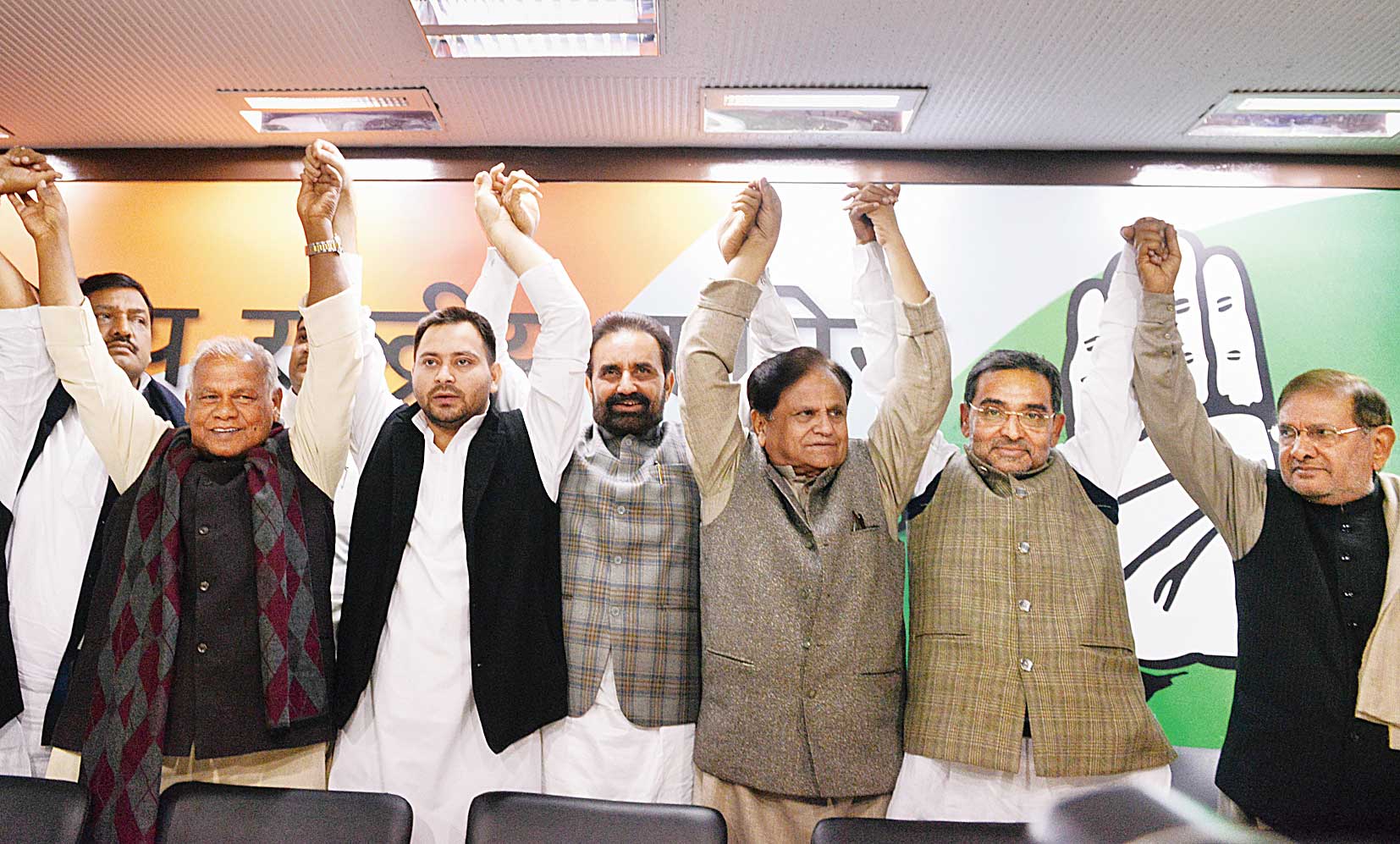 That there can be such a chasm between a man’s words and his deeds is beyond comprehension, a former ally and Union minister had this to say about Prime Minister Narendra Modi on Thursday.

Upendra Kushwaha, the Rashtriya Lok Samata Party chief who served as junior human resource development minister for over four-and-a-half years before leaving the NDA and joining the Congress-led coalition in Bihar on Thursday, accused Modi of not fulfilling any of the promises he had made to the people of Bihar in the run-up to the 2014 parliamentary elections.

“Modiji had said the people of Bihar would not have to go out in search of ‘padhai-kamai-dawai’ (education, livelihood and medical treatment). I joined the NDA trusting his words. Nothing changed in Bihar in four-and-a-half years; he did absolutely nothing. It is incomprehensible that there can be such a big gap between somebody’s words and deeds,” Kushwaha said after joining the Congress-RJD combine.

He sought to justify his crossover to the rival coalition by saying: “Rahul Gandhi showed such harmony in his words and deeds by implementing the promise to waive farm loans within two days (of coming to power in Madhya Pradesh and Chhattisgarh). His fight for the farmers and the poor has been consistent; he demonstrated that commitment during the attempts by the Modi government to dilute the Land Acquisition Act.”

Kushwaha, whose entry will doubtless consolidate the OBC votes in favour of the RJD-Congress grouping, added: “I was being insulted in the NDA. It was… part of a design to weaken me so that I stop raising my voice for the poor.

“The conspiratorial (Bihar chief minister and JDU leader) Nitish Kumar joined the BJP to finish me. I was looking for options. My decision to join this coalition is dictated by the forces of social justice. I have honoured the sentiments of the people who asked me to cross over.”

Kushwaha accused the BJP and Nitish of being apathetic to constructive issues.

“What has changed? Even today people of Bihar, particularly the youth, have to wander in different parts of the country in search of livelihood. I can understand people going out for lucrative jobs and big work but exodus for survival is tragic. The people of Bihar face humiliation in the process. Not jobs alone, nothing has been done for education and health care either,” Kushwaha said.

The Congress and the RJD latched onto the opportunity to spread their political message.

RJD leader Tejashwi Yadav, who was present at the media conference along with Congress leaders where Kushwaha joined forces with them, said: “This is not a coalition of parties. This is a coalition of people to save India and her Constitution. This is an answer to a coalition of thugs, to forces who deceive and mislead.”

Tejashwi added: “It is not only the democratic institutions of India — like the CBI, RBI, ED and the IT — even the BJP allies have become victims of dictatorial behaviour. The trend is clear across the country — the PDP in Kashmir and the TDP in Andhra Pradesh had to quit. BJP allies are unhappy in Maharashtra and Uttar Pradesh. Right-thinking people should shed egos and make sacrifices to join hands to save the Constitution.”

The Congress in-charge of Bihar, Shaktisinh Gohil, expressed similar sentiments: “Kushwaha relinquished his ministerial position because he was worried about the future of India and Bihar. He was disturbed by the attack on the Constitution. It is an ideological assimilation, not for power or vested interests.”

Gohil claimed that the seat distribution for the 2019 Lok Sabha elections would be finalised amicably, but he did not specify a formula.

The Congress parried questions about the possibility of Nitish and Ram Vilas Paswan, the Lok Janshakti Party chief and Union minister, switching over to its Bihar coalition.

RJD leader Tejashwi is known for his unflinching opposition to Nitish, and the Congress didn’t want any strategic mistake by making reckless announcements.

Gohil set the tone by declaring: “So far, there is no discussion on those issues. The decision will be taken collectively when the situation arises as there is no point deliberating on hypothetical questions.”

But Tejashwi made sure he registered his dislike for Nitish, saying: “People say there is a double-engine government in Bihar. The double engine is not engaged in governance; one is into crime, another into corruption. Nitish chacha raped the mandate.”

On Paswan’s perceived unease in the NDA, however, Tejashwi was softer. “Mausam badal raha hai, naya mausam aayega (the weather is changing, a new season will come).”

Manmohan Singh regrets saying Narendra Modi will be a disaster