Kisans to march for Pulwama jawans

Birth anniversary of Sir Chhotu Ram, agrarian reformer, on February 16 will be used to 'expose the falsehoods' being spread by the Modi government 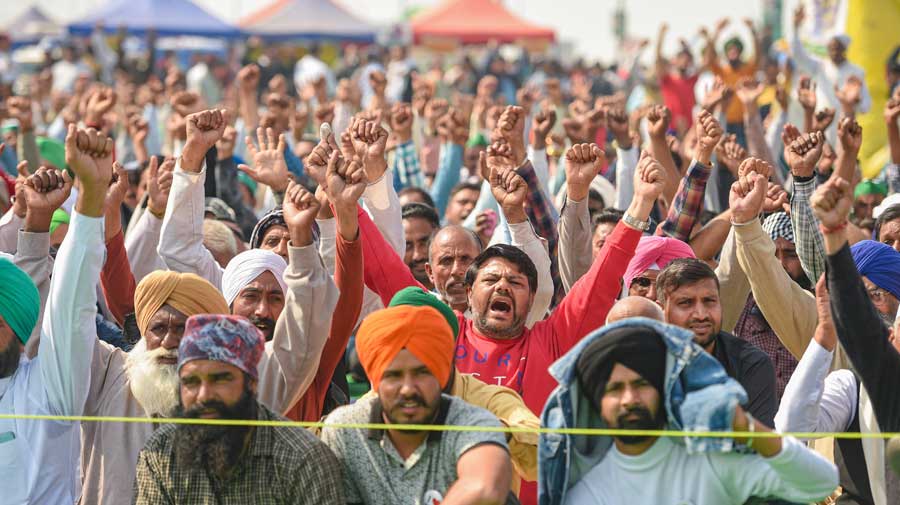 Farmers raise slogans during their protest against the farm laws at Ghazipur border in New Delhi on Wednesday.
PTI
Our Special Correspondent   |   New Delhi   |   Published 11.02.21, 01:25 AM

The protesting farmers have decided to free the toll plazas in Rajasthan from Friday and organise a four-hour nationwide rail roko on February 18 as part of their plans to step up the movement against the farm laws.

If anything, instead of mending fences, Prime Minister Narendra Modi’s repeated assertion that the farm laws are good for the peasants and calling farmers names during his speeches in Parliament are adding fuel to fire, farmer union leaders said as they met on Wednesday at the Singhu border to take stock of the situation and plan protests to keep up the momentum.

Apart from giving a call to free up the toll plazas of Rajasthan from February 12, the Samyukta Kisan Morcha — the banner under which the farmer protests are being undertaken — has asked cultivators across the country to take out torchlight processions on February 14 in memory of the security personnel killed in the Pulwama terror attack in 2019 and the farmers who have died during the protests.

The birth anniversary of Sir Chhotu Ram, agrarian reformer who had fought for the rights of farmers, on February 16 will be used to “expose the falsehoods” being spread by the Modi government about the farm laws and minimum support price.

Sir Chhotu Ram is credited with having initiated the passage of the Punjab Agricultural Produce Markets Act in 1939, which became the basis for the market committees.

The new farm laws seek to weaken the existing agricultural produce market committees by creating an alternative system with more facilitating provisions. Farmers fear that the private mandis will edge out the APMCs in due course, thereby robbing them of their assured avenue for sale of produce.