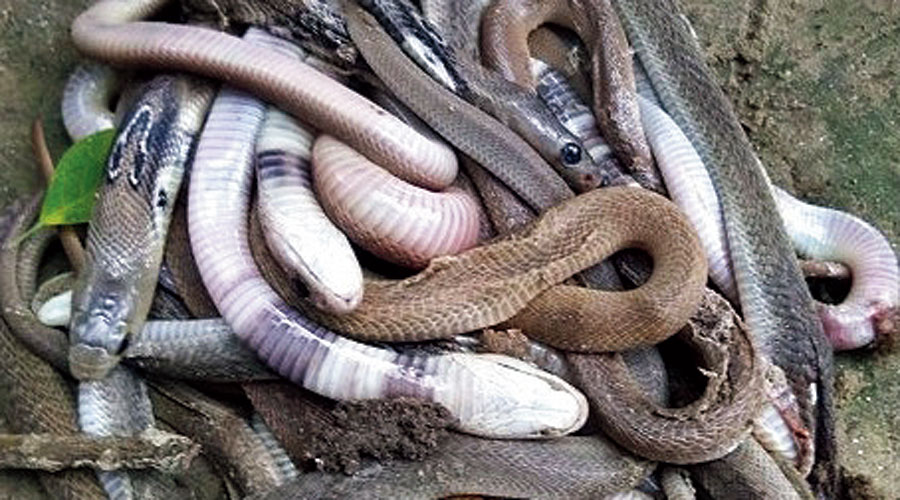 A sessions court in Kerala on Wednesday awarded life sentence in the Uthra murder case to the victim's husband for killing his wife using a cobra.

On October 11, the court had held the husband -- Sooraj S Kumar -- guilty of murder, poisoning, destruction of evidence and also attempt to murder for his first try at killing his then 25-year old wife -- Uthra -- by using a viper.

Additional Sessions Judge-VI Manoj M, who pronounced the sentence, said the case was a rarest of the rare, but looking at the age of the convict -- 28 years now -- it decided to award him life sentence instead of death, Special Public Prosecutor (SPP) G Mohanraj told reporters outside the court.

Besides life for murder, Kumar was also awarded life sentence for the offence of attempt to murder, 10 years for poisoning and seven years for destruction of evidence, the SPP said.

He also said that the court has specifically directed that the convict will first serve the sentences awarded for poisoning and destruction of evidence -- total 17 years -- and thereafter, his life imprisonment will commence.

Additional Public Prosecutor A K Manoj also confirmed the order and told PTI that the court has said the two life terms awarded to Kumar would run concurrently.

He also said that the court has imposed a total fine of Rs 5.85 lakh on the convict.

Another reason cited by the court for not awarding death was the lack of criminal antecedents of the convict, he said.

After the sentence was pronounced, the victim's mother told a news channel that she was not satisfied with the decision as she had expected death would be awarded to the convict.

Sooraj had killed his wife Uthra by letting a cobra bite her in her sleep in May last year.