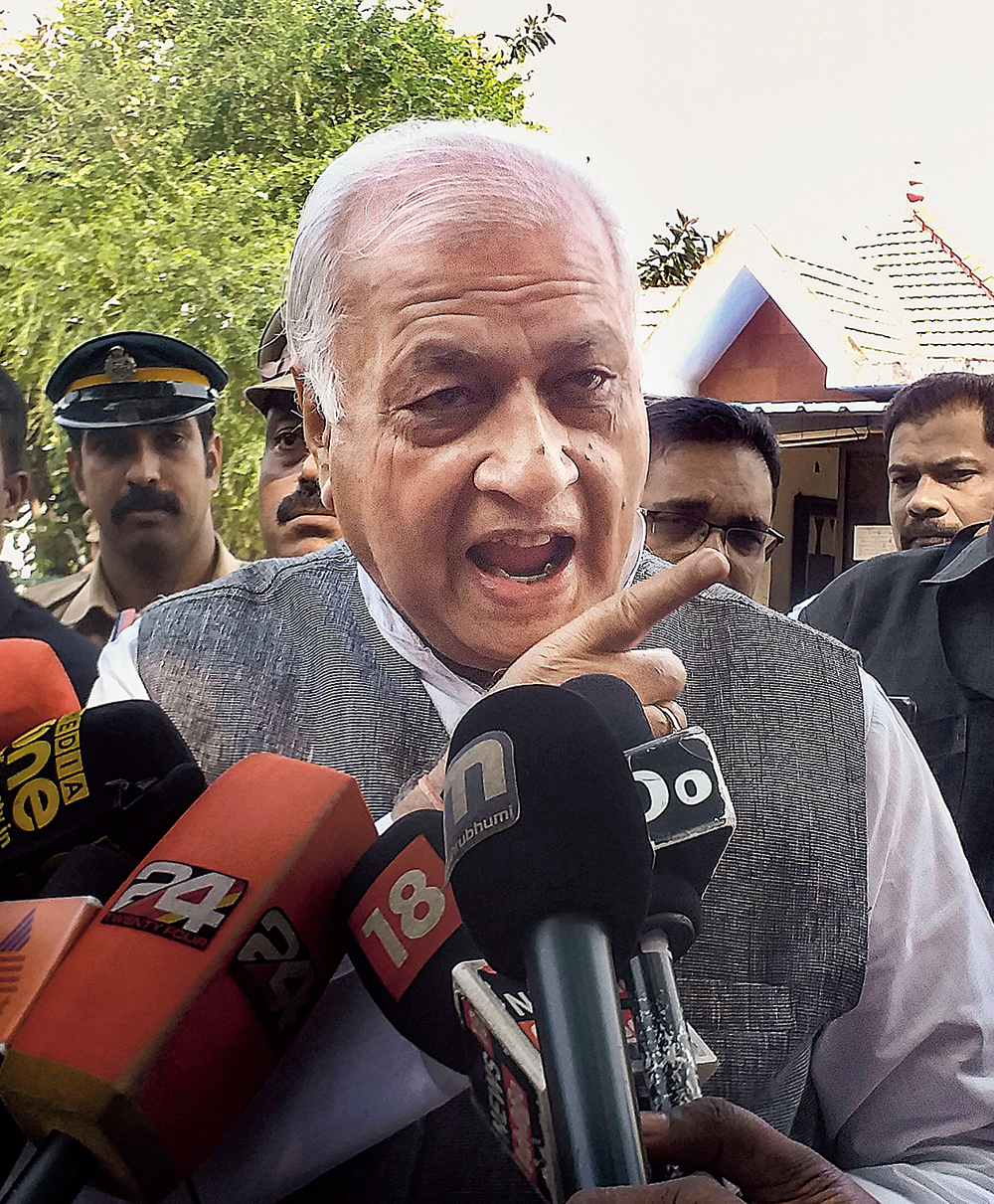 Kerala governor Arif Mohammed Khan on Wednesday read out the entire policy speech in the Assembly, including the paragraph criticising the Citizenship (Amendment) Act, in a signal that chief minister Pinarayi Vijayan had prevailed in their tussle.

Khan, a critic of the state government’s moves against the citizenship law, had all along insisted he would not read out the contentious paragraph. But he surprised the Assembly at the opening of the budget session by reading out the paragraph after clarifying his reservations against it.

He said he was honouring the chief minister’s “wish”. As the governor read out the paragraph, the ruling alliance members thumped their desks. The entire Opposition, barring the lone BJP member, had by then been evicted by the House marshals for refusing to let the proceedings begin.

“The chief minister wants me to read this although I hold the view that this does not come under the definition of policy or programme,” Khan said.

“The honourable chief minister has himself said in his letter that this is the view of the government. To honour his wish I am going to read this paragraph.”

What changed Khan’s mind was apparently a letter from Vijayan on Tuesday night that argued that it was the governor’s duty to read out the entire speech outlining the state government’s policy for the upcoming financial year.

In the paragraph, the state government argued that religion should not be a criterion for citizenship.

“Our citizenship can never be on the basis of religion as this goes against the grain of secularism which is part of the basic structure of our Constitution,” it said.

Khan did not bat an eyelid while reading the sentence on the Assembly resolution seeking the withdrawal of the citizenship amendment.

“This august body unanimously passed a resolution requesting the central government to abrogate the Citizenship (Amendment) Act, 2019, which my government believes goes against the cardinal principles underlying the Constitution,” the paragraph said.

Khan had earlier described the special Assembly session on December 31, which adopted the resolution, as a waste of public money.

The paragraph referred to another point of contention between the governor and the Left government — the state’s legal challenge to the act.

“Pursuant to this my government has filed an original suit before the honourable Supreme Court invoking provisions of Art 131 of the Constitution,” it said.

The House was in uproar even before Khan’s arrival, with the United Democratic Front protesting in the well with slogans and placards demanding the governor’s recall.

Leader of the Opposition Ramesh Chennithala led the protests, angered by the Speaker’s lack of response to his notice that sought to move a resolution demanding the governor’s recall.

After Khan arrived, the Opposition members ignored the Speaker’s call for order. The marshals then evicted them.

The Opposition staged a protest outside the Assembly, with Chennithala accusing Vijayan of having reached an understanding with the governor to protect himself in a corruption case. He gave no details.

“The governor had until yesterday said he would not read Paragraph 18. But now he has read it, revealing the partnership between him and the chief minister,” Chennithala alleged.

He said the UDF would continue its agitation for the recall of the governor, who he claimed had insulted the legislature by describing the December 31 session as a waste of money.