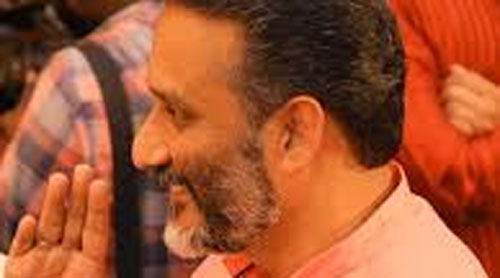 On Friday, Anil Nambiar, the coordinating editor of the pro-BJP Janam TV, stepped down, pending an investigation, after the claims made in a handwritten statement attributed to Swapna Suresh became public.
Facebook
K.M. Rakesh   |   Bangalore   |   Published 29.08.20, 04:37 AM

The Kerala gold scandal has blown up in the face of the BJP.

A statement attributed to a key accused claims that a pro-BJP television journalist had “requested the help” of the UAE consulate in the state capital to support the party in 2018.

The statement also says the journalist offered the suspect advice to defuse the scandal through the consulate. The purported advice has a striking similarity with a claim made by a Union minister three days later.

The scandal has taken the dramatic turn at a time the Opposition Congress and BJP have been seeking the scalp of chief minister and CPM leader Pinarayi Vijayan.

On Friday, Anil Nambiar, the coordinating editor of the pro-BJP Janam TV, stepped down, pending an investigation, after the claims made in a handwritten statement attributed to Swapna Suresh became public.

“In 2018, he (Nambiar) invited me for a dinner at Taj Hotel and had a couple of drinks together. He enquired about UAE investments in India and requested the help of consulate to support BJP,” said the statement that Swapna purportedly made before a central agency.

Swapna is under arrest on the charge of helping smugglers bring in gold using “diplomatic baggage” in the name of the UAE consulate. An influential IAS officer in the Kerala chief minister’s office has already been suspended because of his links with Swapna.

The BJP has not yet responded to the specific claim that Nambiar wanted the consulate to help the party. The nature of the help he allegedly sought is not clear.

The UAE enjoys a special relationship with the Narendra Modi government and honoured the Indian Prime Minister with its highest civilian award last year. There had been reports in the western media that Indian security forces had helped capture and return the Dubai ruler’s runaway daughter off Goa in 2018.

Nambiar, whose channel had played a key role in whipping up sentiments against the Vijayan government for implementing the Supreme Court order allowing women of all ages to enter the Sabarimala temple, has denied the claims in the handwritten statement.

Earlier, call records had suggested that Nambiar was the last person Swapna had called up before switching off her phone and escaping to Bangalore after the smuggled 30kg gold consignment was caught. She was arrested by the National Investigation Agency (NIA) in Bangalore. Nambiar had then said he was in touch with her as part of his job as a journalist.

But the statement attributed to Swapna says Nambiar had suggested that she advise “His Excellency”, a possible reference to the UAE consul-general, to issue a statement mentioning that the gold-filled parcel seized by customs officials at the airport on July 5 was a personal cargo and not diplomatic baggage.

Three days later, on July 8, V. Muraleedharan, the minister of state for external affairs and a BJP leader from Kerala, had said: “We cannot call it diplomatic baggage. It’s a personal cargo that came for a diplomat. A diplomatic baggage is an official package sent from any country in official manner. Here some person had sent a parcel to a person with diplomatic immunity. On the airway bill, it was written diplomatic baggage. The person who came to receive the package was not having requisite papers.”

However, the NIA later told a court in Kochi that fake stickers and insignia had been used to make the parcel, addressed to the attaché of the UAE consulate, look like a diplomatic baggage.

On August 2, it was reported that Union minister Muraleedharan observed a one-day fast at his official residence in New Delhi, seeking the resignation of chief minister Vijayan over the gold scandal.

According to Swapna's purported statement, she called up Nambiar to inform him that "His Excellency" wanted him to draft the statement. "Anil Nambiar agreed to send me the draft letter for this purpose," the statement attributed to Swapna says. "By then I was prantic (possibly 'frantic') about my own safety and was not in a position to follow this up further," the statement says.

The consul-general, Jamal Hussein Al Zaabi, had left India shortly before the first round of nationwide lockdown had been announced on March 24.

After news leaked earlier this week that Nambiar would be questioned by customs officials, Kerala BJP president K. Surendran had sought to distance himself from Janam TV.  However, Netizens soon dug up a 2015 Facebook post in which he had hailed the launch of Janam TV.

Statements such as those attributed to arrested persons like Swapna can sometimes be made under coercion but what has landed the BJP in a quandary is that all the three agencies probing the gold scandal — the NIA, customs and the Enforcement Directorate — report to the Centre now run by the party’s leadership.

Swapna's purported statement is unlikely to win plaudits for the UAE consulate.

"Anil Nambiar had a cheating case in Dubai. And therefore could not visit Dubai for fear of arrest. At that time he wanted to go to Dubai to conduct a formal interview with (a jeweller who was in jail)."

"He (Nambiar) wanted to get the issue cleared and thus contacted Sarith (another accused in the gold case and a former consulate employee) about two years back. Sarith in turn contacted me and I took up the matter with the consulate-general who cleared the issue using his influence in Dubai," the statement attributed to Swapna claims.

It adds that "His Excellency" had been gifted a MacBook in keeping with his wish after he inaugurated a tile shop owned by a friend of Nambiar.

In a Facebook post on Friday, Nambiar claimed he had called up Swapna only for an explanation from the consulate on the smuggled baggage.

"In the last one year, I have called this woman only once. The intent of that call was to get the UAE consulate's explanation," Nambiar wrote.

He said he didn't know Swapna had left the consulate last year.

"While I had called her to check about the diplomatic baggage, I don't understand the reason for her statement that I had asked her to say it is not (a diplomatic baggage)," Nambiar added. "It is not my job to advise or give directions to Swapna."

He said customs officials had during Thursday's questioning asked him about the calls he had exchanged with Swapna on July 5. "As the investigating agency, they fulfilled their duty. I said what I wanted to say. I fully cooperated with the investigation," Nambiar wrote.

"I understand that my presence is becoming an impediment to news flow (at Janam TV). Hence I am stepping aside until the doubts surrounding me are cleared," he added.

The CPM demanded on Friday that the BJP make its stand clear on the case.

"It is clear that the BJP has something to hide as they have distanced themselves from Nambiar after the interrogation," the CPM said in a statement.

"Anil Nambiar is only a small fish. Big sharks are in the ministry of external affairs," he said.