Two killed in clashes between villagers and cops, AAMSU to protest from today 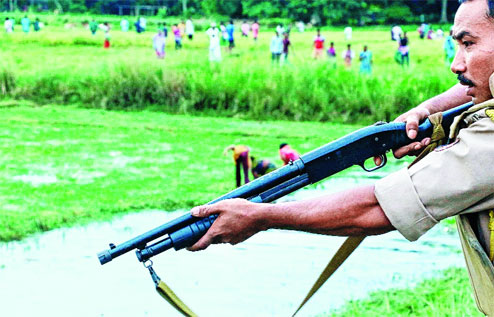 Banderdubi (Bagori): Two persons were killed and 17 injured, including 15 policemen, as an eviction drive in Kaziranga National Park turned violent this morning.

The turn of events came in for criticism from the Opposition and the Krishak Mukti Sangram Samiti (KMSS), a peasants' rights group, but Dispur remained firm on completing the exercise.

The eviction drive was the result of an order passed by Gauhati High Court on October 9, 2015, to evict people living in and around Kaziranga within a month. A notice was served to the people about 10 days ago and eviction was carried out today at Banderdubi, Palkhowa and Deuchur Chang villages.

FIGHT FOR RIGHT OVER LAND

The BJP-led alliance in Assam had promised to solve the problems of poaching and encroachment in Kaziranga if voted to power in the state. By evening, state BJP leaders were heard saying that Dispur, "upholding its poll promise", has evicted illegal settlers from the national park.

A large contingent of security personnel, five excavators and six elephants from the forest department were deployed for the drive. However, when the team approached Banderdubi around 7am, villagers blocked its way with bamboo and GI sheets barricades.

The team tried to persuade the protesters, who were led by KMSS leader Akhil Gogoi, to co-operate but they failed to make any headway as the affected wanted compensation before they left their villages.

The team then declared the mob illegal and cleared the way with excavators. The villagers retaliated by hurling stones. The security personnel then resorted to lathicharge and fired tear gas shells and rubber bullets. Akhil left before the firing started.

The standoff lasted for one-and-a-half hours, during which two persons, identified as Fakaruddin, 26, and Anjuma Khatun, 16, a Class X student of Kuthori High School, were killed. After the two were found dead, the villagers dispersed, leaving the eviction team to carry out its job. Eviction in nearby Deuchur Chang and Palkhowa villages went off peacefully. Altogether 381 families were evicted from the three villages.

The villagers alleged that Fakaruddin and Anjuma were killed during police firing but the administration said the cause of death would be known only after getting the post-mortem reports.

Deputy inspector-general, central zone, Akhilesh Singh, told The Telegraph, "We only used non-lethal means to disperse the crowd and fired rubber bullets. We are here to honour the judgment of the high court and the people have been given sufficient time to leave their homes."

Blaming "vested interests" for the violence, he said, "We will initiate action against Akhil Gogoi as he has been instigating these people for quite some time."

Following criticism from the affected and Opposition parties, the state government appointed a one-man commission under additional chief secretary Rajiv Kumar Bora to probe the circumstances leading to the police firing.

Assam transport minister Chandra Mohan Patowary told reporters at the state secretariat in Dispur that police and intelligence agencies would conduct simultaneous inquiries to identify the forces that instigated the violence and strong action would be taken against the instigators.

He said eviction was carried out in accordance with a high court order and the state government couldn't do anything about it. He appealed to people to remain vigilant against "forces trying to give communal colour to the eviction drive" so that they can't reap political dividend out of the incident. He said Sonowal had given clear instructions to continue the eviction drive.

The chief minister convened a cabinet meeting this morning to discuss the incident.

Patowary said Sonowal had deputed ministers Himanta Biswa Sarma and Keshab Mahanta to hold discussions with the evicted and a majority of them had agreed to leave if paid compensation.

"But suddenly a section of them turned violent during the eviction. Fifteen policemen, including an additional superintendent of police, were injured. Certain individuals instigated the people for their vested interests and we will single them out and take appropriate action against them," Patowary said.

The government's firmness was reflected in Sarma's tweet, "I compliment Nagaon dist. administration for successful eviction drive in #Kaziranga. We will never compromise on JATI, MATI & BHETI. Once again I assure that adequate compensation will be paid to all the deserving land owners".

The All Assam Minorities' Students Union said it would launch a statewide agitation tomorrow in protest against the eviction drive. Representatives of AAMSU, AIUDF and KMSS had visited the areas, where eviction was carried out today, on Sunday to take stock of the situation, an official source said.