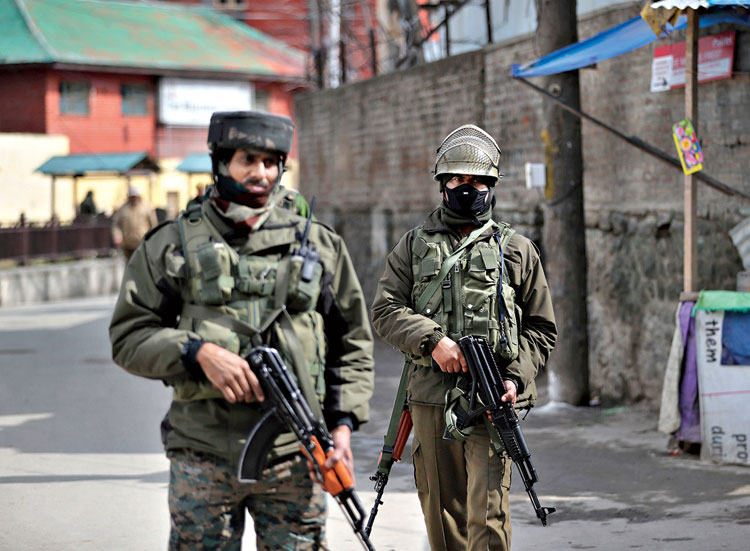 Kashmir’s journalists on Monday confronted a visiting fact-finding committee from the Press Council of India over the council’s conduct during the months of information blockade in Jammu and Kashmir, asking where they were all these months.

The Kashmir Press Club, which has most of the Valley journalists as its members, told the delegation that the period since August 5 had been the “toughest time” for the Kashmiri media, during which journalists faced “harassment, summons, intimidation and censorship”.

The three-member delegation, headed by Balwinder Singh Jammu and including Kamal Nain Narang and Syed Raza Hussain Rizvi, are on a four-day visit to Srinagar to study the media scene. The committee had visited Jammu in December last year.

Press Club office-bearers told the delegation that the reported stand taken by Press Council chairman C.K. Prasad during the lockdown, justifying the restrictions imposed on the Valley media, was “unethical”.

The council had filed an intervention petition in the Supreme Court after the Jammu-based Kashmir Times challenged the restrictions on communications. The Press Council’s stand had kicked up a storm, with the Editors Guild of India and other media bodies slamming it. The chairman later claimed he had not supported the blockade.

“The KPC members raised questions over the conduct of the Press Council of India (PCI) and pointed out that the PCI during this time had failed to show solidarity with the Kashmiri journalists when they were facing existential threats and the most troubling times,” the Press Club said in a statement.

Its secretary, Ishfaq Tantray, told The Telegraph that the Press Club had asked the visitors “where they were these seven months”.

“We asked them why there was not even one statement of solidarity with the Kashmiri journalists,” he said.

Balwinder Jammu, the committee head, said the chairman had withdrawn the petition after facing opposition from members who stood up for “freedom of the press”.

A Press Council office-bearer said the delegation had visited Jammu in December but could not come to Srinagar at the time because of the death of its convener.

A Press Club spokesperson said that the members had raised with the delegation the issue of the communications blackout, during which Internet and mobiles services were shut down for months.

“Kashmir witnessed the longest Internet curfew in modern history, which severely hampered the working of the press in the region,” the Press Club said, terming these “harsh measures” a “press gag”.

“The communications shutdown and the largest Internet shutdown ever deeply impacted the journalists from Kashmir” and was in a way a “question mark over the freedom of the press” in the region, it said.

The spokesperson said the Press Club had informed the committee about “the individual cases of harassment and summons to the journalists by the police during this period, and also handed out a compilation of all the statements and testimonies of the journalists collected during this time”.

“The Press Club pointed out that all these incidents amply reflect the deliberate targeting of journalists in Kashmir since August 5, 2019, which it said was aimed at a complete obliteration of the free press in Kashmir,” the spokesperson said.

The Press Club highlighted how the Internet service providers had, at the government’s behest, sought “coercive undertakings” from journalists before restoring Internet connectivity to the media houses and journalists.

“One clause even asked for ‘providing complete access to the systems and content’ to the security agencies as and when needed,” the spokesperson said.

Journalists could access the Internet all these months at only one place in the Valley -– the media facilitation centre in Srinagar -– where they had to stand in queue.

The communication blockade was gradually lifted. The ban on low-speed Internet was lifted recently, although 4G services are yet to be restored.