After four days of denial, home ministry says miscreants on August 9 threw stones at security forces, but there was no firing 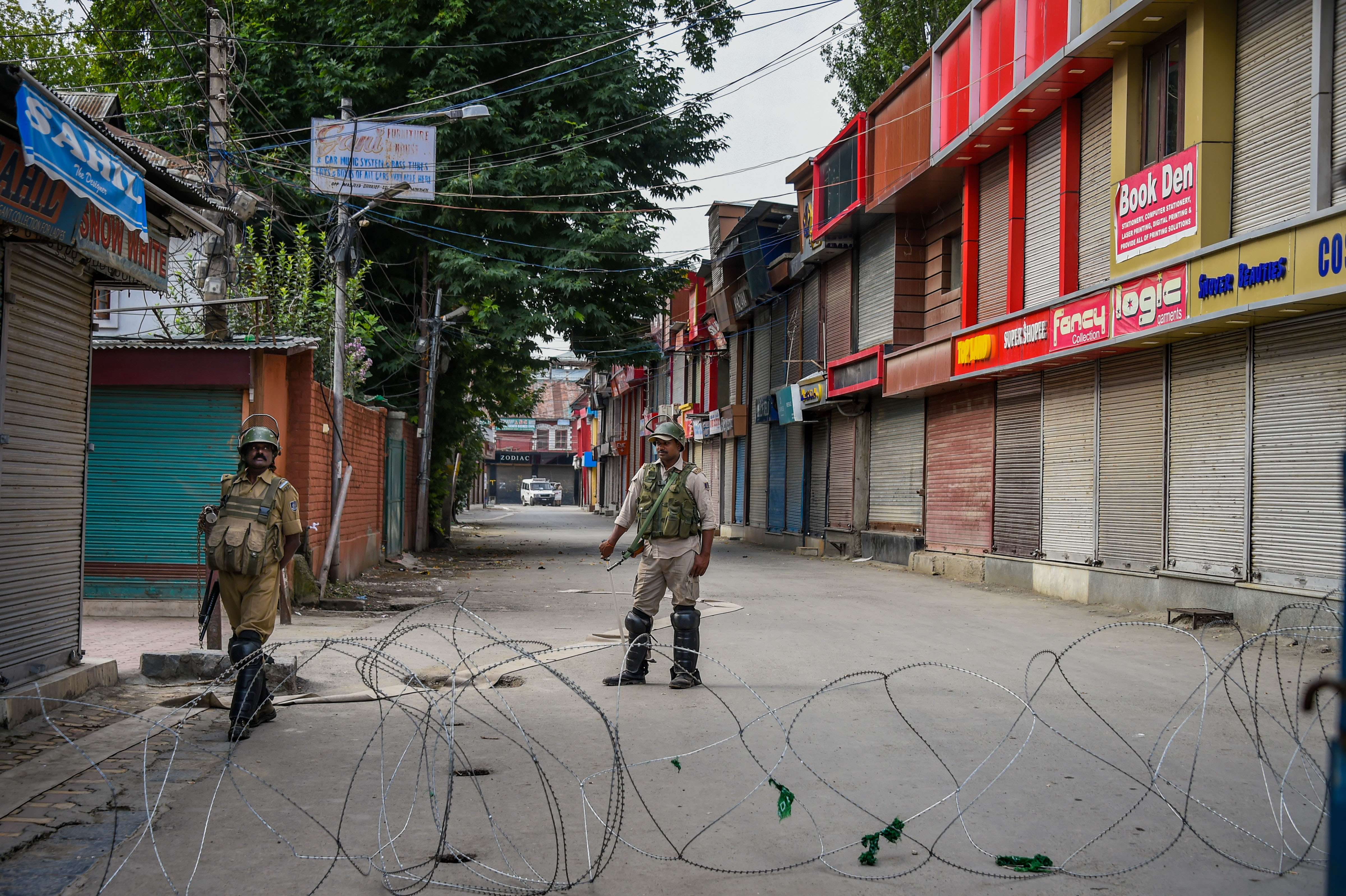 BBC’s Careem tweeted on the government’s acknowledgement of the incident. “Careful to say ‘bullets’ not fired. No clarification on which weapons or ammunition were used,” Careem wrote.

The inspector-general of Kashmir, Swayam Prakash Pani, issued a statement on the alleged August 9 protest, clarifying: “The report is wrong. Non such incident has taken place in the valley. The valley has remained largely peaceful over the last one week.”

The home ministry spokesperson shared another statement by chief secretary and the Jammu and Kashmir police chief that claimed the police had “not fired a single bullet in the 6 days”.

BBC News, however, stood by its story and video from Kashmir.

The Union home ministry on Tuesday grudgingly accepted reports of violence in Saura lst Friday, saying 'miscreants' had mingled with people returning home after prayers at a local mosque in Srinagar and 'resorted to unprovoked stone pelting against law enforcement forces'.

The BBC had put out a video on August 10 saying that there were large protests at Saura in Srinagar the previous day where firing was heard. The BBC video had shown several hundreds gathered for the protest.

The news agency Reuters also reported the incident. But for four days, official reactions from Delhi and Srinagar relayed peace in Kashmir and 'stray protests' where not more than 20 people were involved. There was no mention of 'miscreants' or stone throwing.

The ministry today reiterated that 'no bullets have been fired in #JammuAndKashmir since the development related to #Article370.'

Below is a timeline of what happened on August 9, according to the international media present in Jammu and Kashmir, and how government agencies reacted to reports till today.

The Twitter handle of the spokesperson, ministry of home affairs, denied reports of protests in Kashmir the previou day. It specifically denied reports by Reuters and The Dawn, a Pakistani newspaper. “This is completely fabricated & incorrect. There have been a few stray protests in Srinagar/Baramulla and none involved a crowd of more than 20 ppl,” the tweet read.

The state machinery went into overdrive after that to show that the situation in Kashmir was normal.

A video on Doordarshan showed national security advisor Ajit Doval interacting with local people in Anantnag. Another video, shared by Prasar Bharati, showed people offering prayers in a Srinagar mosque. It shared another video of road traffic claiming that “contrary to some fake news reports, it's business as usual in Srinagar.” A special program on DD reported the valley has returned to normalcy.

The Srinagar district magistrate Shahid Choudhary shared photos of functional ATMs and people queued outside it. At night, All India Radio News shared a video uploaded by Imtiyaz Hussain, a Jammu and Kashmir police officer showing local people out and about in different parts of Srinagar, Ganderbal, Baramulla, Pulwama and Budgam. The video was soon debunked on social media as a fake.

Stories in media on a said incident in Soura region of #Srinagar.
On 09/08, miscreants mingled with people returning home after prayers at a local mosque. They resorted to unprovoked stone pelting against law enforcement forces to cause widespread unrest.@diprjk @JmuKmrPolice

The same day, BBC uploaded video footage of the protests in Saura. “The BBC witnessed the police opening fire and using tear gas to disperse the crowd. Despite that, the Indian government has said the protest never took place,” its report said. BBC South Asia bureau chief, Nicola Careem tweeted the video.

The government admitted that there had been a protest on August 9, but insisted that security forces did not open fire.

“On 09/08, miscreants mingled with people returning home after prayers at a local mosque. They resorted to unprovoked stone pelting against law enforcement forces to cause widespread unrest,” tweeted the MHA spokesperson. “Law enforcement authorities showed restraint and tried to maintain law & order situation. It is reiterated that no bullets have been fired in #JammuAndKashmir since the development related to #Article370.”

Restrictions were relaxed in Kashmir for Friday prayers. People weren’t allowed to offer prayers in the main Jamia Masjid in Srinagar, but in local mosques.

The same day, a Reuters report said that the “Indian police used tear gas and pellets to fight back at least 10,000 people protesting” in Srinagar's Saura after they took to the streets following the Friday prayers. The report mentioned a police officer and two witnesses as information sources. Al Jazeera, the Gulf-based televesion network, too published a report mentioning Saura.

A news report originally published in Reuters and appeared in Dawn claims there was a protest involving 10000 people in Srinagar.

This is completely fabricated & incorrect. There have been a few stray protests in Srinagar/Baramulla and none involved a crowd of more than 20 ppl.