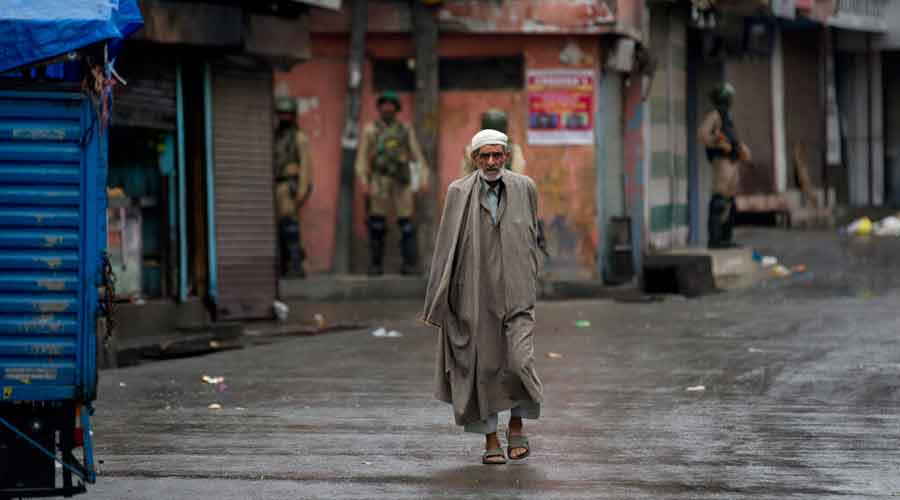 When police constable Suhail Ahmad Ahangar fell to a militant’s bullets in Srinagar on Friday, it marked the second time in two generations that Kashmir’s insurgency had left his family scarred.

Suhail was born an orphan five months after his father Mushtaq Ahmad Ahangar disappeared in end-1989, at the inception of militancy, never to be seen again.

Mushtaq, then about 30, left behind the unborn Suhail and his elder sister, a couple of years his senior.

On Friday Suhail, who was about 30 too, left behind sons Sahel and Suhaib, aged four years and 18 months.

The story of the family, settled in the Ashmuqam locality of Anantnag, is testimony to how the conflict in Kashmir is consuming generation after generation.

“The same tragedy has visited our family 30 years apart. We were devastated then; we are devastated now,” Mushtaq’s younger brother Javaid Ahmad told The Telegraph.

A relative who refused to be identified said Mushtaq, who worked at a private flour mill, had crossed over to Pakistan to receive arms training and fight for Kashmiri independence.

“We never learnt what happened to him. Some say he was killed on the border in 1990 but we never received his body,” he said.

Javaid said: “For years, we searched for him. Sometimes we would hear he was languishing at some place or the other and would rush there.”

He added: “There’s no jail (in the country) we did not visit — we even went to a jail in Tamil Nadu to find him. We could not offer a janaza (last rites) for him because we never got to know what had happened to him.”

Javaid said the family gradually came to believe that Mushtaq had died a few months after his disappearance.

Suhail’s mother lost her husband in her twenties — about the same age that the policeman’s widow is now.

Suhail and his colleague, selection grade constable Mohammad Yousuf from Kupwara, were killed in a six-second attack at Barzulla, Srinagar.

Images of the attack show a lone militant, hiding his assault rifle under his pheran, spraying bullets at the two policemen. Both died in hospital.

Former chief minister Mehbooba Mufti visited Suhail’s home in Anantnag and said the deaths had underscored the need for India and Pakistan to talk and prevent violence.

“The BJP government should start talks so that bloodshed stops. Our graveyards are full of (slain) men,” she said.

“Whether it is here, or with Pakistan, there should be talks. They repeatedly say Pakistan is behind the violence. At least, to end the violence, they can initiate talks.”