Dozens of processionists were injured, some of them blinded or nearly blinded, when the forces fired tear gas canisters and shotgun pellets to disperse the mobs 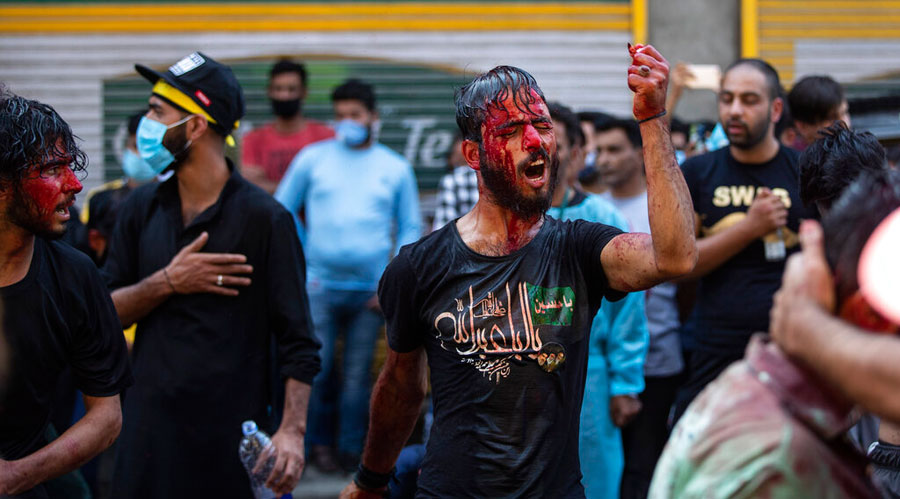 Blood runs down the face of a Kashmiri Shiite Muslims flagellating himself during a Muharram procession in Srinagar on Saturday.
AP
Muzaffar Raina   |   Srinagar   |   Published 31.08.20, 01:12 AM

Valley newspapers faced criticism on Sunday for largely ignoring the pellet injuries to Muharram mourners in Saturday’s security force action, their silence in line with their year-old policy of not annoying the government for fear of a backlash or advertisement squeeze.

Dozens of Muharram processionists were injured, some of them blinded or nearly blinded, when the forces fired shotgun pellets and tear gas canisters to disperse the mobs on Saturday and Sunday, mostly in the Srinagar and Budgam districts.

Gruesome pictures of pellet-hit boys have taken social media by storm but several of Srinagar’s major dailies have given little or no space to the forces’ action, triggering outrage and a cry for an “independent media”.

Class X student Suhail Ahmad was hit by pellets in both eyes on Saturday. His right eye is damaged and there is only a faint hope that the left would recover.

Videos showed people using crude methods to remove pellets from the wounds of some of the injured, too afraid to visit hospitals lest they be arrested.

Srinagar police chief Haseeb Mughal told reporters the mourners had defied the Covid curbs on gatherings and pelted the police with stones.

Valley newspapers had in the past been sympathetic to the azadi cause and prioritised coverage of rights violations by the security forces. But they fell in line after the clampdown in August last year and began to resemble government bulletins.

On Sunday, social media users, including journalists working for the national and international media in Srinagar, censured their coverage — or the lack of it — of the Muharram processions.

Images of the front pages of major dailies were splashed across social media to prove the point.

Shia mourners traditionally take to the streets during Muharram but the government had imposed restrictions this time, citing the Covid threat, after some processions earlier this week turned into pro-azadi demonstrations.

“There is not even an atom of courage or for that matter honesty in editors of Kashmiri newspapers to report truth in their pages. What a meek surrender! I wonder how they live with themselves,” journalist Tariq Mir tweeted.

“Mind you, #Bemina and #Budgam are not in #Kashmir. Otherwise the colossal human tragedy and pellet horror would have been reported by the Srinagar-based newspapers. Let us not be harsh on them. News is about proximity. Bemina and Budgam are far-off places. Let’s be considerate!” mocked journalist author Gowher Geelani. Bemina is a locality in Srinagar.

Fahad Shah, editor of the news portal Kashmir Walla, said the shoddy coverage had underlined the “need for an independent media” in the Valley.

Shah’s has been one of the few Valley news outlets willing to speak truth to the government, and he has been summoned by the police a few times over certain reports.

An editor of an English-language newspaper said the Kashmir dailies were “gradually reclaiming the space” they had conceded last year after the clampdown.

“There have been some brave pieces of late. All the newsmakers like Farooq Abdullah and others were behind bars; as they have returned to public life, our coverage is also improving,” the editor told The Telegraph. “But yes, there’s still a long way to go.”

Another editor claimed the newspapers had been discreetly told to give the heaviest coverage to “developmental activities” by the government.

“The (newspaper) business has been hit hard during the yearlong lockdown over the scrapping of Article 370 and the pandemic. Government advertisements are the dailies’ only source of revenue,” said the editor, a member of the now-defunct Kashmir Editors Guild.

The guild, he said, had not issued a single statement or held a single interaction since the revocation of Jammu and Kashmir’s special status on August 5 last year because of the “fear of a backlash”.

When the government came out with a new media policy in June that empowered the State to decide what is fake news and act, no major media organisation in the Valley chose to criticise it.

Journalists who have taken a stand have faced a crackdown, being booked and summoned by the police.