Karnataka Speaker asks: Why Supreme Court route to meet me? 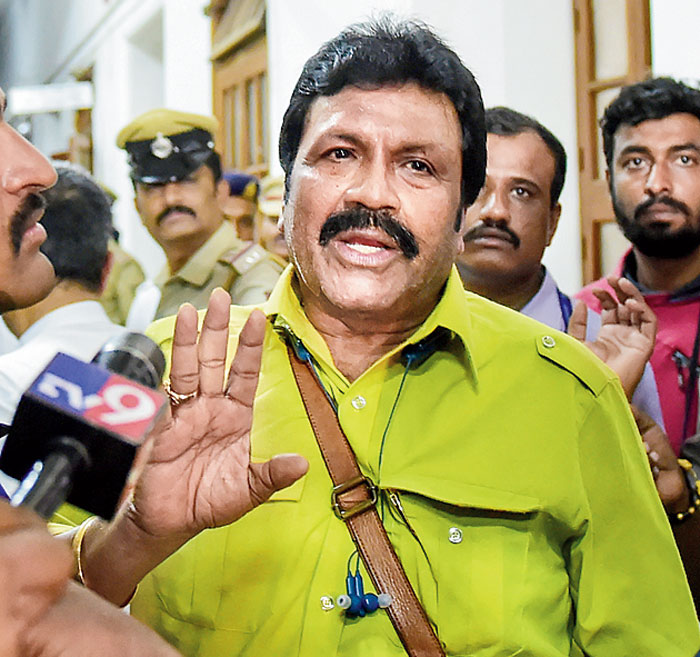 Karnataka Speaker Ramesh Kumar on Thursday expressed his disappointment at the rebel MLAs approaching the Supreme Court without even meeting him to fulfil their legal obligations.

Sixteen lawmakers from the ruling alliance — three from the JDS and 13 from the Congress — have resigned from the Assembly so far.

Most of the rebels had flown to Mumbai where they were holed up in a hotel. Ten of them approached the apex court on Wednesday, seeking a directive to the Speaker to meet them and decide on their resignations.

Kumar met the lawmakers, in keeping with the court order, around 6pm in his chamber. During the meeting, which lasted almost an hour, the 10 petitioners handed in fresh resignation letters.

All the 10 had earlier put in their papers, but some of these were found not to be in the prescribed format. For the rest, the Speaker had said he would need to meet them to verify that their resignations were voluntary.

Kumar addressed a news conference after the meeting on Thursday and said he would examine the resignation letters submitted afresh.

The Speaker appeared upset that the lawmakers had approached the court to meet him although he has been in the city since Tuesday. “They didn’t even come to me. Those who were in Karnataka rushed to Mumbai and then approached the Supreme Court,” he said.

The BJP, waiting to form the government if the coalition collapsed, had accused the Speaker of delaying a decision on the resignations.

“I am delaying this because I love this land. I am not acting in haste. My obligation is to the people of the state and the Constitution of this republic,” he said.

The Speaker said he had been in his office until 12.45pm on Saturday, but none of the 11 MLAs who had submitted their resignations that day had informed him.

“Should I have worked at lightning speed? For whose sake? What about the rules, the people? I only go by the Constitution,” he said.

While the Supreme Court had directed the Speaker to meet the petitioners before 6pm, two special aircraft carrying the MLAs landed at the airport only around 5.20pm. The city police formed a green corridor (zero-traffic corridor) for the bus carrying the MLAs to zip through the streets to Vidhana Soudha. Despite that, they reached the Speaker’s office several minutes after 6pm.

One MLA, Byrathi Basavaraj, sprinted to the Speaker’s office, perhaps worried he would have left for the day after waiting till the deadline. The rest trooped in behind him.

The ruling alliance has issued whips to MLAs to be present in the Assembly for the opening day of the monsoon session. Ignoring the whip would be reason enough to initiate disqualification procedures.