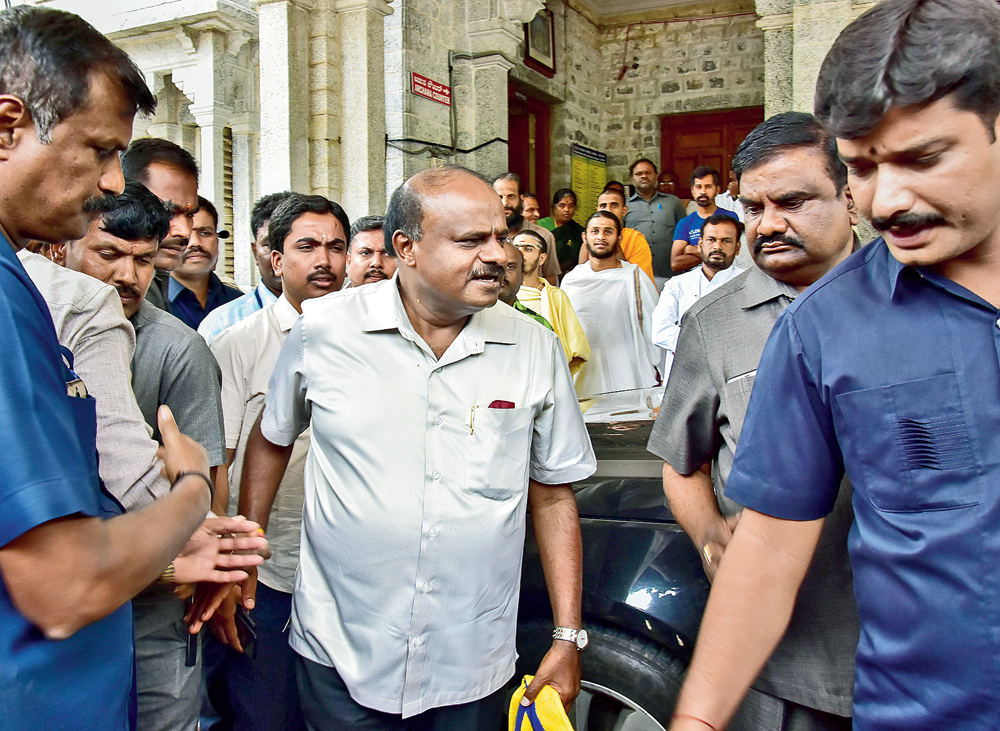 The Supreme Court has ruled that the 15 dissident MLAs in Karnataka “ought not to be compelled to participate in the proceedings of the ongoing session” of the Assembly.

The court added that the rebel MLAs should be given an option “that they can take part in the said proceedings or to opt to remain out of the same”.

The order, delivered by a bench headed by Chief Justice of India Ranjan Gogoi, came on the eve of the start of the trust vote process in the Karnataka Assembly where the fate of the Janata Dal Secular-Congress coalition hinges on the dissident MLAs.

If the rebel MLAs skip the trust vote, the H.D. Kumaraswamy government is unlikely to be able to survive.

The rebels thanked the Supreme Court for “allowing us to abstain”, suggesting they were viewing the court order as protection from the anti-defection law. PTI quoted Mukul Rohatgi, the former attorney-general who appeared for the rebels, as telling reporters that any whip issued by the ruling parties would not apply to the dissidents now.

The bench of Chief Justice Gogoi and Justices Deepak Gupta and Aniruddha Bose, however, refused to entertain the plea of the 15 rebels to direct the Speaker to forthwith decide on their resignations.

The top court upheld the supremacy of the Speaker in deciding the time frame to deal with the resignations, saying he could not be fettered on this issue by any judicial fiat.

The court said the larger constitutional issues — whether the resignation letters or the applications for disqualification would take precedence in the decision-making process — would be dealt with at an appropriate stage.

The first part of the ruling, which warns against compelling the rebels to attend the House proceedings, drew the maximum attention and comments, not all of them unanimous.

The bench had said: “We also make it clear that until further orders, the 15 members of the Assembly ought not to be compelled to participate in the proceedings of the ongoing session of the House and an option should be given to them that they can take part in the said proceedings or to opt to remain out of the same.”

Some politicians and lawyers suggested the order would shield the rebels from disqualification under the anti-defection law if they defy any whip and stay away from the House since the court has said they cannot be “compelled”.

A whip, issued by the ruling coalition at the start of the session and in operation now, has confined itself to asking the MLAs to be present in the House. A voting whip had not been issued till Wednesday night but some sources suggested it would be in place if and when a division of votes would be taken.

Former additional solicitor-general K.V. Viswanathan told The Telegraph in response to a question that “these orders will only give horse-trading of legislators a fillip”.

But Abhishek Singhvi, a senior lawyer and Congress spokesperson who represented the Karnataka Speaker, expressed happiness and said the plea of the rebels for issuance of a directive to the Speaker for accepting their resignations had been rejected.

The reaction from the rebel camp and the BJP suggested they were reading the court order differently.

Rebel leader A.H. Vishwanath, who is cooped up in Mumbai with 13 other MLAs, told a Kannada channel: “We wholeheartedly thank the Supreme Court for allowing us to abstain from the session and the trust vote.”

PTI quoted BJP state chief and former chief minister B.S. Yeddyurappa, whose party has been saying it has nothing to do with the Karnataka shenanigans, as saying the court order was a “moral victory” for the rebels.

Some split hairs on what the Supreme Court may have had in mind when it mentioned compulsion. They said compulsion need not mean a whip and it could refer to any attempt at using physical force to take the rebels to the House.

But the arguments of Rohatgi, who represented the rebels, during the hearing suggested that by compulsion, he meant the threat of disqualification.

On Tuesday, Rohatgi had said in the court: “I (the dissident MLA) want to resign. Nobody can compel me to work. I don’t want to defect. I want to go to people again and get elected. By the threat of disqualification, the Speaker is compelling me to sit with a particular group and vote in a particular manner. He is compelling me to go against my wishes. It is impinging upon my fundamental rights.”