It comes against backdrop of heightened rhetoric about forced religious conversions, triggering fears that it would be used as an excuse to harass the minority community 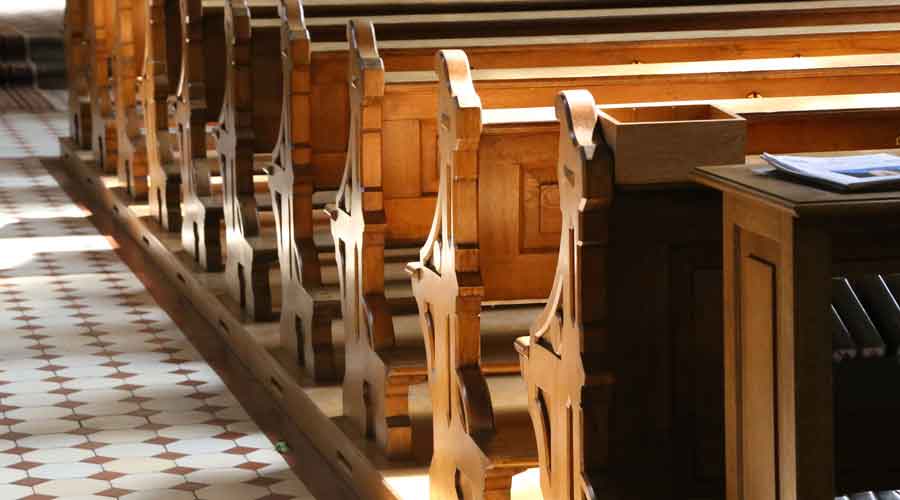 The BJP-dominated committee limited the scope of the report to conversions to Christianity.
Shutterstock
K.M. Rakesh   |   Bangalore   |   Published 17.10.21, 01:34 AM

A Karnataka legislative committee dominated by the ruling BJP has ordered a survey on churches and the functioning of Christian missionaries, prompting the archbishop of Bangalore to express concern as well as anguish.

The survey comes against the backdrop of heightened rhetoric about forced religious conversions, triggering fears that it would be used as an excuse to harass the minority community.

The Karnataka Legislative Committee on Backward Classes and Minorities Welfare issued instructions to district authorities on Wednesday to conduct the survey, ignoring objections raised by members of the Opposition.

BJP MLA Goolihatti Shekar, a strong advocate of an anti-conversion law, chaired the meeting in the absence of his party colleague and chairman Dinakar Keshav Shetty. Shekhar  directed district authorities to find out how many of the 1,700-odd churches and prayer halls in the state were legal.

In the recent Assembly session in September, Shekar had alleged that a large number of Hindus, including his mother Ratnamma, had been forcibly converted to Christianity. He had later organised a ritual at a temple in Hosadurga on October 10 to convert his mother and eight others back to Hinduism.

Chief minister Basavaraj Bommai of the BJP has also been underscoring the need for a strong anti-conversion law.

Congress member of the Legislative Council, P.R. Ramesh, who is part of the 20-member committee, told The Telegraph on Saturday that the BJP members had disregarded pleas against such a report.

“We had vehemently opposed the move since it is unconstitutional and dangerous for communal amity. But the BJP members refused to heed our opinion and ordered officials to conduct a survey on churches and missionaries and submit a report on their activities,” Ramesh said.

Another member of the Upper House, B.M. Farooq of the Janata Dal Secular, was the only other Opposition member among the nine lawmakers who attended the meeting whose original agenda was development issues concerning backward classes and minorities.

“Our Constitution allows religious conversion based on one’s free will. I had asked them what right do they have to stop someone from converting on his or her own will,” Ramesh said.

There may have been stray instances of conversions through allurements, but most of those who have taken up Christianity have done so to escape the repressive caste system, sources said. According to the 2011 census, Christians make up 1.87 per cent of Karnataka’s population.

“Since they were bent on proceeding with the plan, I told the meeting to examine all conversions to Hinduism through the BJP’s ghar wapsi drive,” the Congress’s Ramesh said.

But the BJP-dominated committee limited the scope of the report to conversions to Christianity. “They are targeting Christians and this survey will only increase the harassment of Christian missionaries who are doing a great service in education, health care and women’s empowerment,” Ramesh said.

Bangalore archbishop Peter Machado said in a statement: “In fact, against the background of the conversion bogey and anti-religious feelings that are being whipped up, it’s dangerous to conduct such surveys. With this, our community places of worship, as also pastors and sisters, will be identified and may be unfairly targeted. We are already hearing of such sporadic incidents in the north and in Karnataka.”

“We are always against forceful, fraudulent and incentivised conversions and we repeat that we are lawfully abiding by the prescriptions of the Constitution of India, which for us is supreme and sacred,” the archbishop noted.

Archbishop Machado had recently led a delegation of bishops to Bommai to express their concerns after the chief minister iterated the need for an anti-conversion law.

“Does not the Constitution in Article 25 (also 26, 29 and 30) ensure the freedom of every citizen to profess, practise and propagate his/her religion without fear or force? Why do we need any anti-conversion laws when there are enough safeguards enshrined in the Constitution and the legal system of the country to punish the guilty?” the archbishop said in the statement.

He added that such laws would end up being “tools in the hands of a few to hound and persecute the innocent”.

“We are sad that the Hon’ble Chief Minister, Shri Basavaraj Bommai, whom we regard highly as a broad-minded and enlightened person, succumbs to the pressures from fundamentalist groups, who wish to indulge in disturbing the peace, harmony and peaceful co-existence in the society,” the statement said.