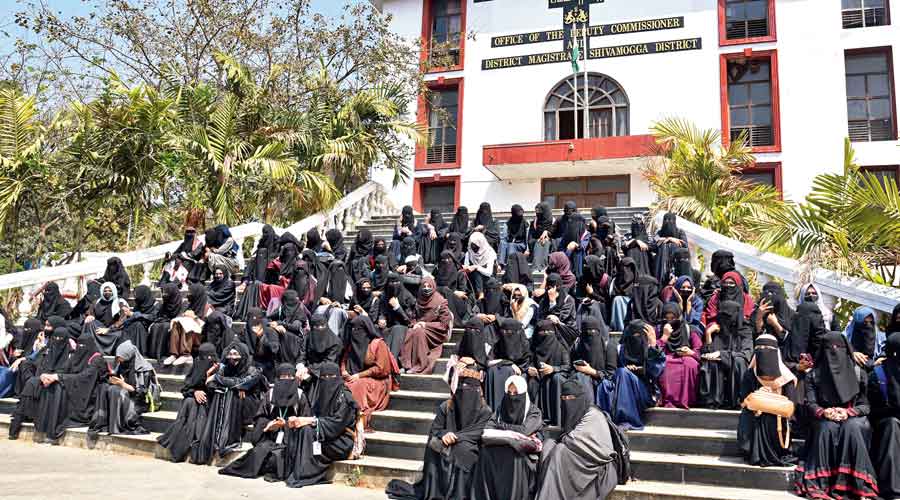 A large number of colleges refused entry to hijab-clad girls on Thursday although chief minister Basavaraj Bommai had told the Assembly a day earlier that the Karnataka High Court order restraining students from wearing religious attire would apply only to institutions with prescribed uniforms.

In its interim order of February 10, the court had directed that pending consideration of the petitions seeking that the right to wear the hijab be upheld, “we restrain all the students regardless of their religion or faith from wearing saffron shawls, scarfs, hijab, religious flags or the like within the classroom”.

The court had, however, added: “We make it clear that this order is confined to such institutions wherein the college development committees have prescribed the student dress code/ uniform.”

Minister for higher education C.N. Ashwath Narayan had on Tuesday assured that no restrictions would be in place in degree colleges. The minister had said that only schools and pre-university colleges that have Classes XI and XII would have to comply with the high court order since they had uniforms.

The Karnataka government on Thursday ordered that students of schools managed by the minority welfare department, including the Maulana Azad Model English Medium Schools, should not wear the hijab, saffron scarves, or any religious flags.

Most degree colleges across Karnataka, however, continued to restrain students from wearing the hijab on Thursday. Hundreds of students were forced to return home while many others hit the streets in protest.

Parents of hijab-wearing students joined their wards in several districts to demand that the government make sure they are either allowed inside classes or online classes are held so that they don’t miss out on lessons before the annual exams. A large number of students and their parents marched to the deputy commissioner’s office in Shimoga.

Similar protests were held in Bellary and Belgaum.

“We are just students and don’t understand the politics behind this issue and don’t want to be part of these dirty games,” a hijab-clad student said in Shimoga.

She criticised the attempt to draw a line between education and religious rights with Muslim women being regularly asked by the local media whether they wanted studies or the hijab.  She said many students picked certain colleges only because the hijab was allowed there. “I am in my final semester and have always been wearing the hijab.”

A parent at the protest outside the deputy commissioner’s office in Shimoga said: “Our Prime Minister always talks about ‘Beti Bachao, Beti Padhao’. So why is he silent when the education of thousands of girls is at stake? Isn’t freedom the same for everyone, irrespective of religion?”