The party was also leading in two other segments 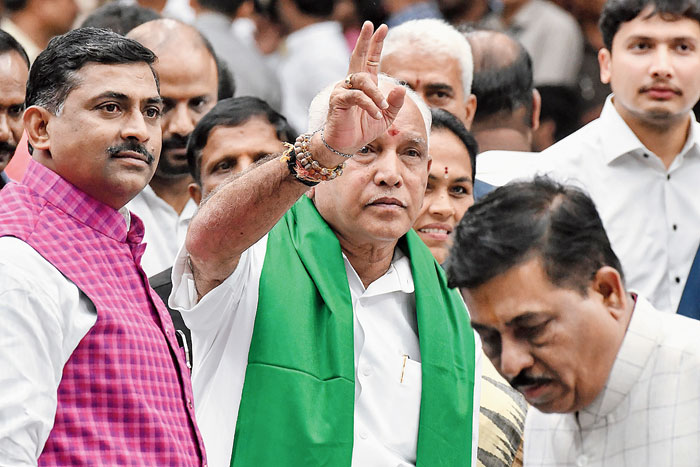 Independent candidate Sharath Bachegowda, who was earlier expelled from the BJP for anti-party activities after he contested the bypoll as a rebel, was heading for a win in Hoskote
(PTI)
PTI   |   Bengaluru   |   Published 09.12.19, 08:47 AM

The ruling BJP bagged 10 seats and was leading in two others out of 15 constituencies that went for Assembly bypolls last week, helping the B. S. Yediyurappa government hold on to power in the southern state of Karnataka.

The Congress, which won 12 of those 15 seats in the 2018 Assembly polls, was leading only in two segments — Hunsur and Shivajinagar — while its former ally the JD(S) trailed in all the 12 seats it contested.

JD(S) had won in three — K. R. Pete, Mahalakshmi Layout and Hunsur — out of these 15 constituencies in the 2018 Assembly polls.

Prime Minister Narendra Modi, addressing a poll meeting in Jharkhand, hailed the BJP's performance and accused the Congress of stealing the people's mandate in Karnataka through the back door, contending it has been taught a lesson in the just-concluded bypolls.

Independent candidate Sharath Bachegowda, who was earlier expelled from BJP for anti-party activities after he contested the bypoll as a rebel, was heading for a win in Hoskote.

The BJP needed to win at least six of the 15 seats to remain in a majority in the 225-member Assembly (including the speaker, who has a casting vote), which would still have two vacant seats — Maski and R. R. Nagar.

In the Assembly with the current strength of 208 after the disqualifications, the BJP has 105 MLAs (including an independent), the Congress 66 and the JD(S) has 34 MLAs.

There is also one BSP member, a nominated member and the speaker.

The bypolls were held to fill the vacancies caused by the disqualification of 17 rebel Congress and JD(S) MLAs, whose revolt led to the collapse of the 14-month-old H. D. Kumaraswamy-led coalition government in July and paved the way for the BJP to come to power.