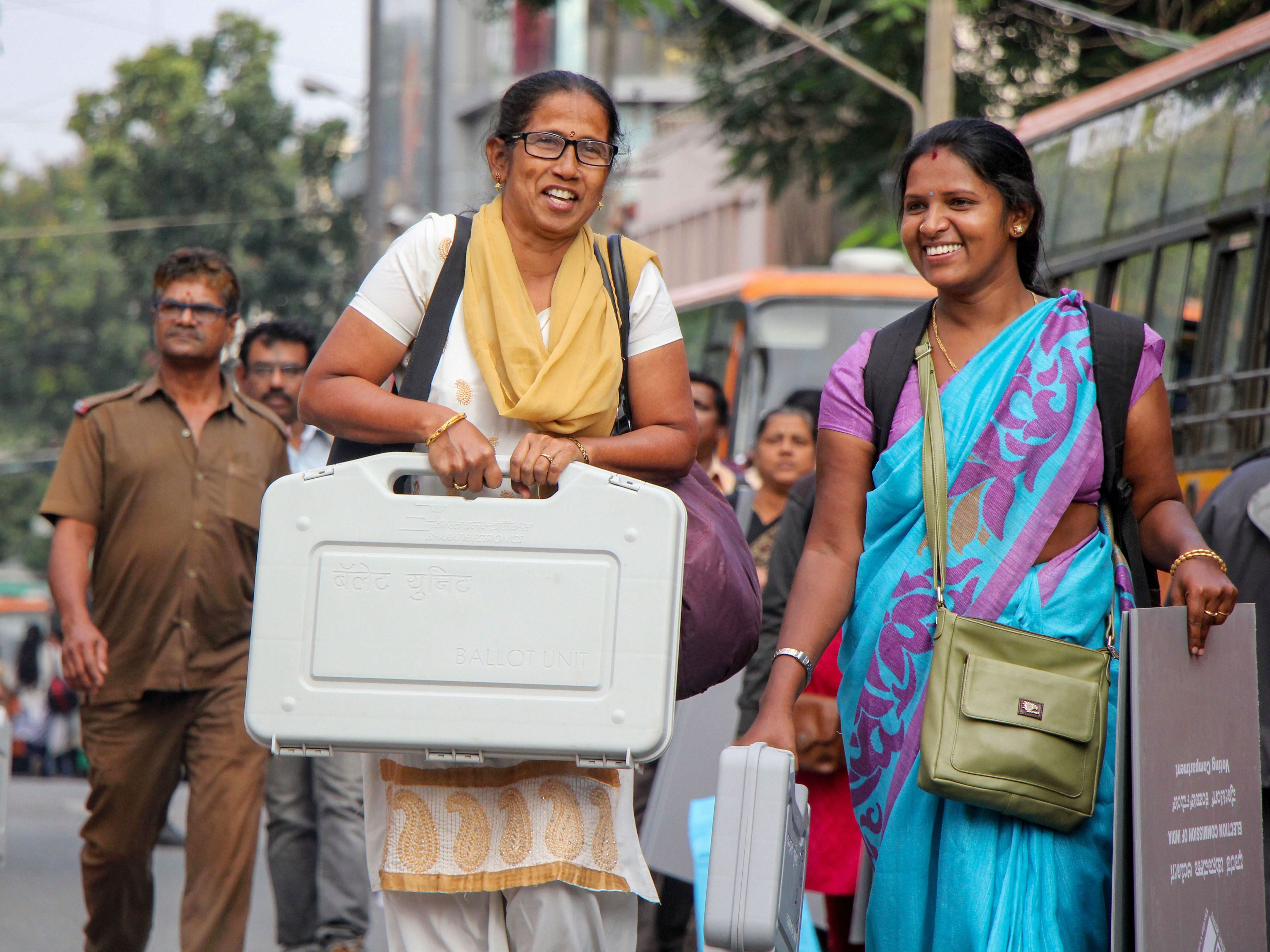 The ruling BJP appeared heading towards a splendid show, leading in 11 out of 15 Assembly constituencies that went to bypolls on December 5, as the counting was underway on Monday.

The BJP needs to win at least six of those 15 seats to remain in a majority in the Assembly.

In the previous elections, the Congress had won in 12 of those 15 seats and the remaining three had gone to the JD(S).

Trends available so far showed the Congress leading in two (Shivajinagar and Hunsur), while JD(S) and an independent candidate were ahead in Yeshwanthpura and Hoskote constituencies, respectively.

BJP candidate Narayana Gowda has taken a lead of 1,403 votes in K.R. Pete against Congress' B. L. Devaraj, who was ahead in the initial rounds.

If Gowda wins, this will be Amit Shah-led party's first ever victory in the Vokkaliga bastion of Mandya district, dominated by Congress and JD(S) for decades.

Marching towards victory, BJP's Shivaram Hebbar was leading against Bhimanna Naik of the Congress in Yellapur by a margin of 39,598 votes.

Also, Gopalaiah of the BJP was leading in Mahalakshmi Layout by a margin of 15,094 votes against Girish K. Nashi of the JD(S).

In Gokak that saw a battle between the Jarkiholi brothers, Ramesh Jarkiholi of the BJP was ahead of his brother Lakhan from the Congress by a margin of 12,615 votes.

Congress nominees H. P. Manjunath (Hunsur) and Rizwan Arshad (Shivajinagar) were leading by a margin of 19,395 and 2,414 votes, respectively, at last count, while JD(S)' Javarayi Gowda was ahead by a wafer-thin margin in Yeshwanthpura.

BJP's rebel and independent candidate Sharath Bachegowda, son of Chikkaballapura BJP Lok Sabha member B. N. Bachegowda, was leading ahead of the party's official candidate M. T. B. Nagaraj in Hoskote by a margin of 8,117 votes.

After he refused to bow out of the electoral race, the BJP had expelled Sharath from the party.

Among 13 disqualified legislators fielded by the BJP as party candidates for the bypolls, 10 are maintaining a lead against their opponent candidates.

BJP had fielded 13 of the 16 disqualified legislators, who had been admitted into the party after the Supreme Court allowed them to contest the bypolls, as its candidates from their respective constituencies from where they had won in the 2018 Assembly elections on Congress and JD(S) tickets.

The bypolls were held to fill vacancies caused by the disqualification of 17 rebel Congress and JD(S) MLAs, whose revolt led to the collapse of the 14-month-old H. D. Kumaraswamy-led coalition government in July and paved the way for BJP to come to power.

The BJP needs to win at least six of the 15 seats to remain in a majority in the 225-member Assembly (including the speaker, who has a casting vote), which would still have two vacant seats in Maski and R. R. Nagar, where byelections are yet to be declared owing to election-related petitions pending in court.

In the Assembly with the current strength of 208 after the disqualifications, BJP has 105 MLAs (including an independent), the Congress 66 and the JD(S) has 34 MLAs. There is also one BSP member, a nominated member and the speaker.