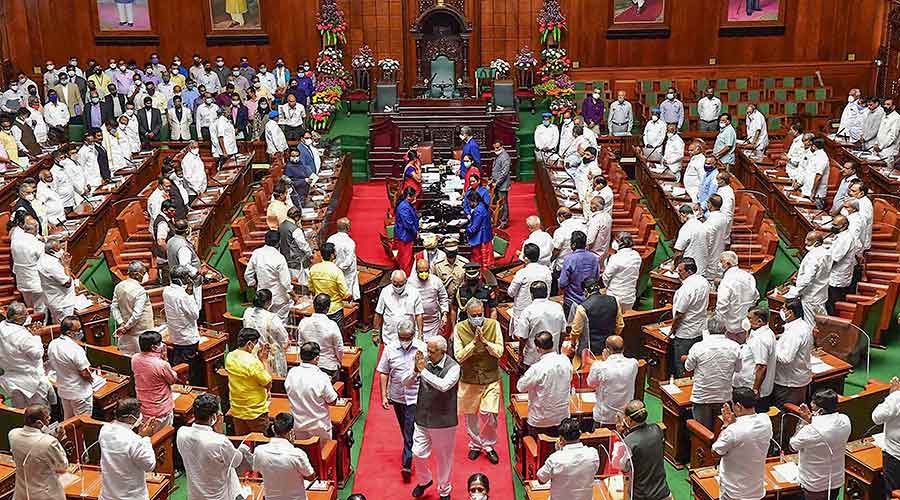 The ruling BJP in Karnataka has reached an understanding with Opposition Janata Dal Secular with the sole aim of wresting control of the Legislative Council where it doesn’t have the sufficient number to pass crucial bills.

According to the arrangement, which comes more than a year after the BJP toppled the JDS-Congress coalition by poaching 17 of their lawmakers, a JDS member would be made the chairman of the council while the BJP would settle for deputy chairmanship.

The ruling party was quick to fulfil its promise to JDS by nominating M.K. Pranesh for  the post of deputy chairman on Thursday.

Horatti had on Wednesday told reporters that he had already sent his resume to BJP national president J.P. Nadda.

“This deal was in the making for sometime,” said a JDS functionary who declined to be named.

“But this arrangement will be limited to the Legislative Council and not the Assembly, at least for now,” the JDS leader added.

Yediyurappa had taken the initiative for a rapprochement with JDS leaders, former Prime Minister H.D. Deve Gowda and former chief minister H.D. Kumaraswamy, after sensing strong opposition from within the BJP, with several leaders wanting a change in leadership.

The current presiding officer, Shetty, has proved more than a handful for the ruling party to control the Upper House. He had twice adjourned the House before the government could table a contentious cattle slaughter bill after passing it in the state Assembly in December last year.

With the JDS joining hands with the BJP, the ruling party would enjoy a clear majority in the Upper House, as well. This would help the government “pass crucial bills without the Opposition and Shetty coming in the way”, the JDS functionary said.

In the House of 75 seats, the BJP is the single-largest party with 31 members, Congress has 29, including the chairman, JDS 13, one Independent and one vacancy.

Indications of a possible truck between the BJP and JDS was evident on December 15 when a one-day special session of the council was convened to move a no-trust motion against Shetty and pass The Karnataka Prevention of Slaughter and Preservation of Cattle Bill 2020 that provided for up to seven years in jail for violators.

The BJP had made deputy chairman S.L. Dharmegowda of the JDS occupy the chairman’s seat after closing the doors of the chairman’s chamber to stop Shetty from entering the hall. But that led to the Congress members physically removing Dharmegowda from the chair.

On December 29, Dharmegowda was found dead after being run over by a train in Chickmagalur in a case of suicide. His family had then admitted he was under treatment for depression, which apparently worsened after the ruckus in the council.

The state government had then taken the ordinance route to enact the cattle slaughter law, which has come into force.

The relationship between the JDS and Congress had gone sour after the collapse of their coalition government. The two parties had come together to keep the BJP out of power after the 2018 state polls produced a hung Assembly.