He was released around 1.30pm after more than three hours and the yatra, a cavalcade of 23 vehicles that was to start at 10.30am, got rolling 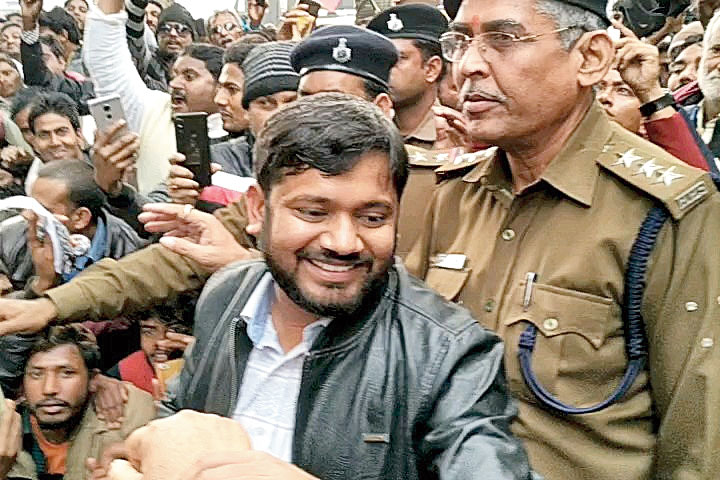 He was released around 1.30pm after more than three hours and the yatra, a cavalcade of 23 vehicles that was to start at 10.30am, got rolling. Around 100 people --- political and civil society representatives ---- are part of the yatra, which will address rallies in each of Bihar’s 38 districts before winding up on February 29.

The first rally of the yatra was scheduled at nearby Bettiah but the police detained Kanhaiya and the other participants outside the ashram, saying they lacked permission for the meeting. This aborted the rally.

But an hour into the detention, thousands had gathered in front of the gates of the ashram, located in West Champaran district, about 250km northwest of Patna, which the Mahatma had established in 1917 during the Champaran Satyagraha.

As the crowd grew restless, Kanhaiya pacified it and said: “The police are saying we have been taken into custody. We are people who obey the law. We are in larger numbers here than the police; still we will obey the law.”

He dissuaded the crowd from chanting slogans against the administration and went on: “They are asking us for papers to prove we are citizens of this country, but are not showing us the papers empowering them to detain us. Still, we will fight on because we have to create the India of the dreams of Gandhi, Ambedkar and Bhagat Singh.”

Kanhaiya asserted that people had a right to demand “azadi” (freedom) in an independent country.

“When people ask me, ‘What freedom do you want?’ I tell them, ‘We want freedom from poverty, hunger, unemployment, NRC, NPR, CAA’,” he said.

Suryakant Choubey, the sub-divisional police officer for Narkatiaganj, said Kanhaiya and his supporters were detained as a precaution because the day was Basant Panchmi, an auspicious occasion for Hindus.

“We did not want any law-and-order problem because of the yatra and the rally on a festival day. Opponents and supporters of the citizenship law had clashed in Bettiah on Wednesday,” he said.

“Kanhaiya cooperated with us when we stopped him. Later, we allowed him to address the gathering outside the ashram.”

Kanhaiya was released after he obtained permission from the East Champaran district administration to address a rally at Motihari.

The yatra is being held under the banner of the “Bihar NPR-NRC-CAA Virodhi Sangharsh Morcha”, made up of more than 100 citizens’ organisations who will arrange the district-level rallies. It will conclude with a rally at the Gandhi Maidan in Patna on February 29.

Apart from stopping at a couple of places in each district, it will make unscheduled stops to spread awareness about the harmful effects of the new citizenship arrangement.

Kanhaiya addressed a rally at Motihari later in the day. The yatra will pass through the Siwan and Gopalganj districts on Friday.

Shakeel Ahmad Khan, Bihar MLA and Congress minder for Jammu and Kashmir who is among the yatra’s organisers, said: “We had all the required permissions, yet were detained by the police. I then rang chief minister Nitish Kumar. He said he would ask the administration to allow the yatra.”