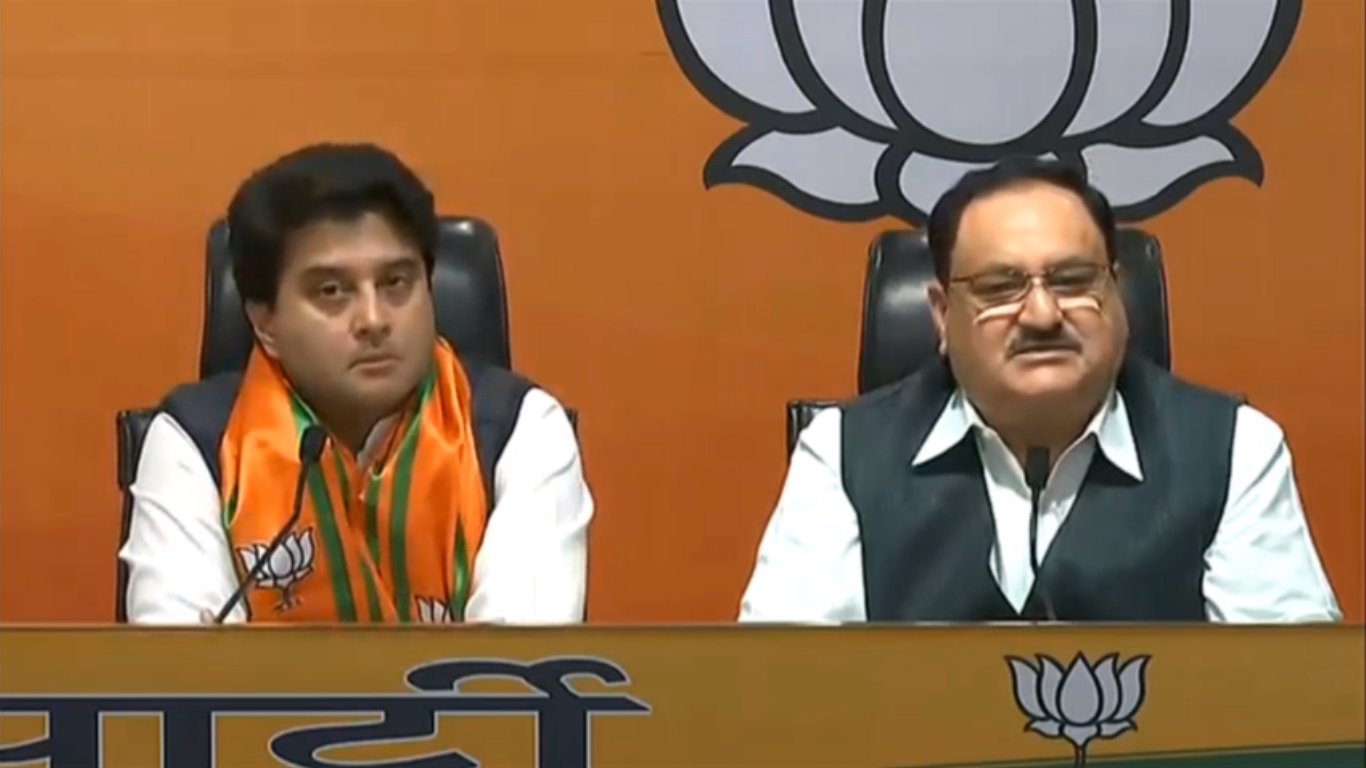 A day after announcing his resignation from the Congress, Jyotiraditya Scindia joined the BJP on Wednesday in presence of the ruling party's president J.P. Nadda.

According to sources, the BJP is likely to name him as one of its candidates for the Rajya Sabha polls in Madhya Pradesh and is also confident of forming the government in the state with his help as 22 MLAs, including Scindia's supporters who have resigned from the state Assembly.

Addressing a press conference at the BJP headquarters after being inducted into the party, Scindia criticised the Congress saying that the party is not the same as it used to be and is far removed from reality.

He hailed Prime Minister Narendra Modi's leadership and said the country's future is secure in his hands.

Talking about his decades-old association with the Congress, Scindia said he was hurt and distressed as he was not being able to serve the people in that party.

Attacking the Congress government in Madhya Pradesh, he said the dream which he along with his former colleagues saw for Madhya Pradesh has been shattered in 18 months.

'I would like to thank BJP chief Nadda, Prime Minister Modi and home minister Amit Shah for inviting me into the BJP family,' he said, adding that they had given him a platform to serve the people.

Peeved with his marginalisation in the Congress, Scindia met Union home minister Amit Shah on Tuesday and then the two leaders went to the Prime Minister's residence where they held talks for over an hour.

Soon after meeting Prime Minister Narendra Modi, the disgruntled Madhya Pradesh Congress leader tendered his resignation to party president Sonia Gandhi saying it was time for him to move on.

Following his exit, the 22 Congress MLAs followed suit and resigned. The 22 have been despatched to BJP-ruled Karnataka for safe-keeping.

With this, the Congress’ strength in the 228-member state Assembly has been reduced to a minority. Before the rebellion, the Congress had 114 seats, including support from four Independents, two BSP MLAs and one from the SP.

Veteran Congress leader Digvijaya Singh has, however, expressed confidence in winning the floor test, saying 13 out of 22 rebel MLAs have told him that they won’t quit the Congress.

Scindia took the decision to sever his ties with the Congress on the day of his father Madhavrao Scindia's 75th birth anniversary.

A four-time MP, Scindia first got elected from Guna in Madhya Pradesh in 2002 after winning a by-election necessitated by his father's demise. He was only 31 years old at that time.

After the Congress lost the 2014 General Election, Sonia Gandhi named him the party's chief whip in the Lok Sabha.