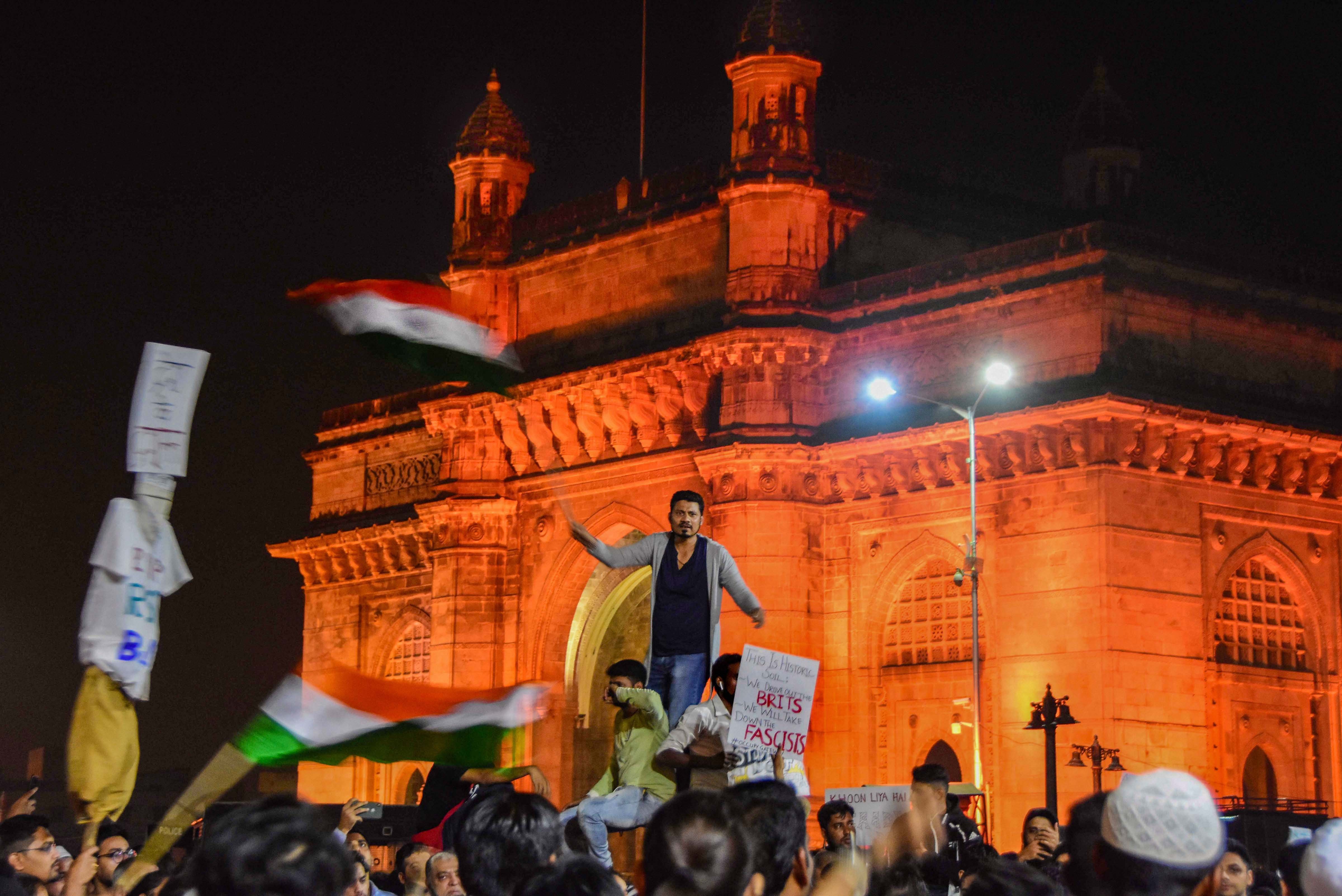 People protesting against the JNU violence had to be shifted to Azad Maidan from Gateway of India on Tuesday morning as roads were getting blocked and tourists and common people were facing problems, a police official said.

Police had appealed to protesters to shift but they didn't listen, so they were 'relocated' to Azad Maidan near the Chhatrapati Shivaji Maharaj Terminus, the official said.

'As the demonstration was posing problems for tourists and in traffic movement, we requested the protesters to move to Azad Maidan. But some groups did not listen despite our repeated request, so we relocated them to the Azad Maidan,' deputy commissioner of police (zone 1) Sangramsingh Nishandar said.

Earlier, hundreds of people, including students, women and senior citizens—who had been protesting at the iconic Gateway of India since Sunday midnight—demanded action against those behind the JNU violence and the resignation of Prime Minister Narendra Modi and Union home minister Amit Shah.

Violence broke out in the Jawaharlal Nehru University (JNU) in Delhi on Sunday night as masked men armed with sticks and rods attacked students and teachers and damaged property on the campus. Nearly 34 people were injured in the violence.

With tambourines and guitars in their hands and songs of revolution on their lips, people protested against the attack on JNU students throughout the night in front of the Gateway of India and the Taj Mahal Palace hotel in Mumbai.

Songs like Hum dekhenge, Hum honge kamyab and Sarfaroshi ki tamanna rent the air as students of IIT Bombay, TISS, and members of students' organisations, including the ASFI, raised slogans against Modi and Shah.

The protesters waived the tricolour and raised slogans like Kagaz nahi dikhayenge (won't show documents) and Tum kaun ho be (who are you?).

They also raised slogans against the alleged tanashahi (dictatorship) of Modi-Shah as they opposed the Citizenship (Amendment) Act, the National Register of Citizens and the National Population Register.

The protesters also brought up the issue of the Transgender Persons (Protection of Rights) Act-2019.

There was heavy police deployment at the protest site where water, tea, biscuits and fruits were served to protesters during the night. The city civic body also made arrangements for toilets.

The protest organisers had earlier asked participants to bring food, water, bed sheets, jackets, mats, power banks, charger and medicines along with them.

On Monday, protests were organised near the Hutatma Chowk in Fort area, but later the permission was denied.

A call was given that people join the protest in front of the Gateway of India. Demonstrations had started there after Sunday midnight.

Beside Mumbai, protests against the violence were held on Monday in Aurangabad and Pune, among other cities.

Maharashtra minister Jitendra Awhad joined the protest at the Gateway of India on Monday, while Thackeray said the JNU violence reminded him of the deadly 26/11 Mumbai terror attacks.