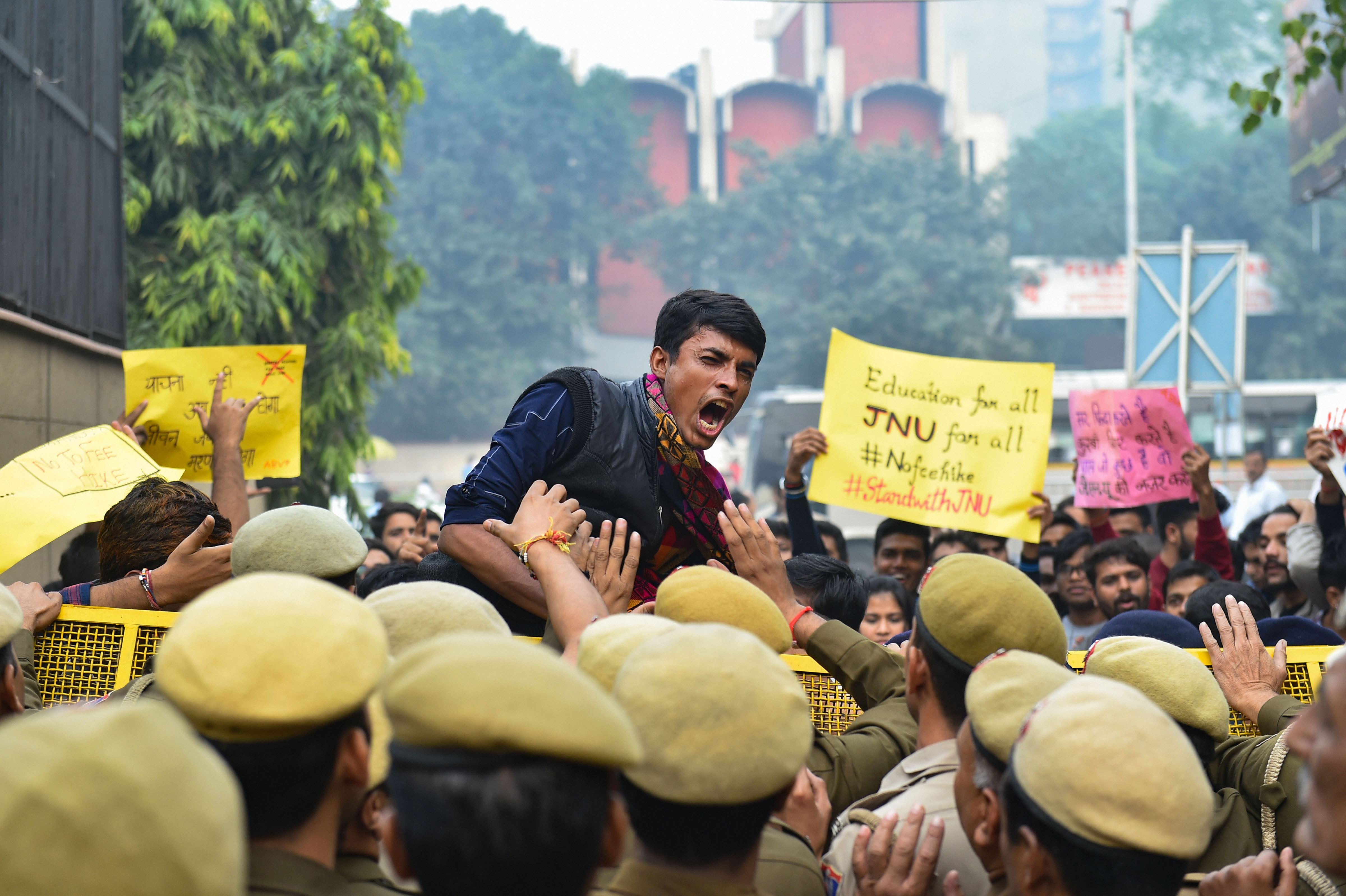 A number of JNU students were detained and some injured when police allegedly baton-charged and stopped them at many places as thousands of protesters marched towards Parliament on the first day of the winter session on Monday, demanding a complete rollback of the hostel fee hike.

The students, who were holding a protest on the university's premises for the past three weeks, hit the streets carrying placards and chanting slogans, seeking to get the attention of Parliament about their demand.

The protesters asserted that they would not relent until the government withdraws the hike.

Hundreds of police personnel stopped the students on the Baba Ganganath Marg, around 600 metres from the main gate of the university in south Delhi. Some of the students were forcefully stopped from moving ahead.

Several leaders of the agitation were detained by the police when they insisted on marching forward. Initially, the barricades outside the Jawaharlal Nehru University's gates were removed and the students were allowed to march.

Later, the students managed to march till Safdarjung Tomb near Lodhi road, where the students were stopped again as Delhi police officials tried to strike a dialogue with the protesters.

The students took to Twitter to share pictures from the march and the injuries they received, allegedly due to the baton charge by the police, with the hashtag 'EmergencyinJNU' trending on the micro-blogging site.

The entry and exit points of three Delhi metro stations near Parliament were shut down temporarily, while trains were not halting at Udyog Bhawan and Patel Chowk stations.

Traffic also went out of gear on the Nelson Mandela Marg, Aurobindo Marg and Baba Gangnath Marg among other intersections.

The top brass of the Delhi police remained on its toes to control the crowd as slogans against the force reverberated.

Earlier in the day, the ministry of human resource development appointed a three-member committee to recommend ways to restore normal functioning of the JNU which has been witnessing periodic protests by students over a variety of issues.

While the committee will initiate dialogue with the students and varsity administration immediately and submit recommendations on actions to be taken. The UGC will provide required support for functioning of the committee.

Akshat, a JNU student said, 'The students' union has not been informed by the ministry about the formation of a panel. The administration's officials and the panel should speak to the elected union to solve the issue.'

'We are being given a lollipop in terms of the partial rollback. I am the first from my family to attend a university. There are many others like me. Education is not the birthright of a privileged few,' Priyanka, another student, said.

Students took out the march carrying banners that read 'save public education', 'fees must fall' and 'ensure affordable hostels for all'.

Another student, who did not wish to be named, said, 'We haven't seen our VC (vice-chancellor) in a long time. It's time that he comes out and talks to us. Instead of appealing to us through teachers and other methods, he should initiate a dialogue with us.'

The JNU Teachers' Association (JNUTA) has expressed their concern over the current situation in the university campus.