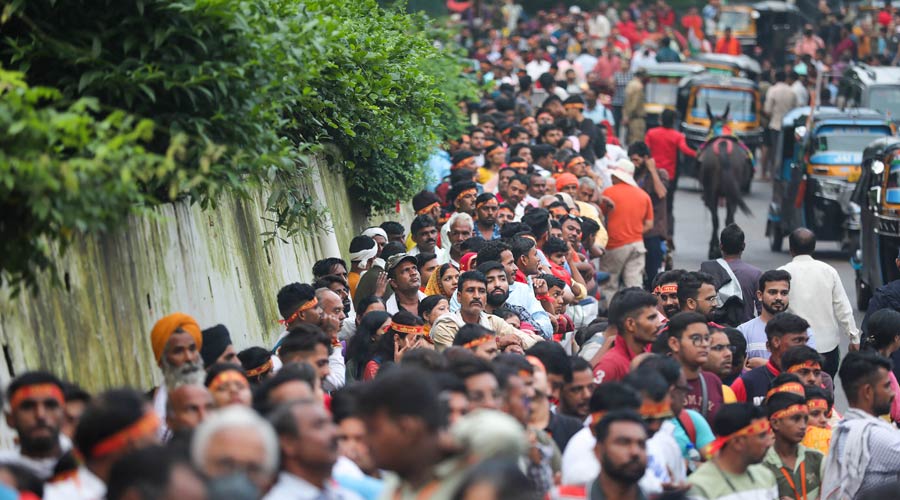 Over 1,500 devotees were allowed to resume the journey on the old track around 6.30 am from Darshani Dodi in Katra, the base camp for the yatra, they said.

However, the Himkoti (battery car) track which is also known as the new track, is still closed due to ongoing clearance operation, even as the helicopter service remained suspended due to bad weather, officials said.

The pilgrimage was temporarily suspended Friday evening following heavy rains in the Trikuta hills. Thousands of pilgrims were present at the shrine when it started raining heavily around 6 pm and continued till midnight.

Chief Executive Officer, Shri Mata Vaishno Devi Shrine Board, Anshul Garg said there was no report of any casualty or damage due to the heavy rainfall.

"We have reached as per our scheduled programme and are eagerly waiting to have darshan at the shrine," Kumar Yogesh, a resident of Madhya Pradesh, said while waiting in a queue of the yatra.

Delhi-resident Rita (45) said she heard about heavy rains at the shrine but still responded to 'Mata's' call. We are shortly leaving for the Bhawan to seek her blessings, she said.

Many pilgrims, however, were disappointed to return to the base camp without 'darshan' amid heavy rains.

"We were asked to return to the base camp by the security personnel. We are staying back to complete our yatra," Joginder Singh, a resident of Haryana, said.

He said panic had gripped the pilgrims on watching the water gushing down the hill but the shrine board management worked overtime for their safety.

The shrine board stopped the upward movement of the yatra from Katra late Friday evening as a precautionary measure in the interest of safety of the pilgrims.

It also accorded priority to yatris, who were holed up in Bhawan area, to come down towards Sanjichhat and then Katra under close watch of Shrine Board staff, police and CRPF officials.

Disaster Management teams and medical units have also been kept on alert to respond to any emergency.