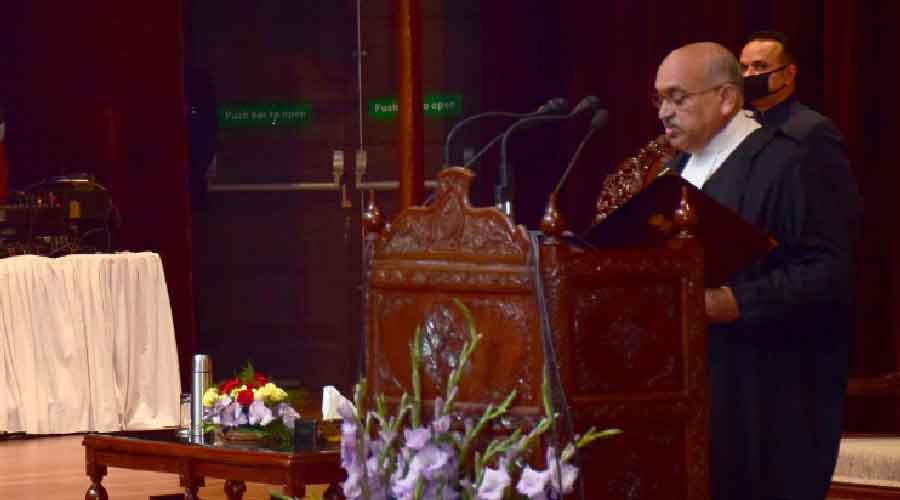 Chief Justice Pankaj Mittal of the High Court of Jammu and Kashmir and Ladakh has favoured a new label for the country — the Spiritual Republic of India — while frowning on the 1976 inclusion of “secular” and “socialist” in the Preamble to the Constitution.

Speaking on Sunday at an event, “Dharma and the Constitution of India”, the chief justice regretted that the country had imported laws from the West while ignoring its own circumstances and culture.

He said the addition of “socialist” and “secular” to the Preamble had not made much difference since India always was a secular country. At the same time, he said, India was capable of taking care of citizens from all strata of society and was therefore inherently socialist too.

He seemed to be arguing that India was always a “spiritual country” rather than a “Hindu country”, and that the labels “secular” and “socialist” had reduced its “cosmos of pure spirituality” to religion.

“This is what you call a narrow-minded approach. Otherwise, India was always a secular country. Its name should have been Spiritual Republic of India,” he said.

Justice Mittal delved deeply into Hindu scriptures including the Vedas, saying they were a sort of treasure trove of wisdom. He emphasised that India’s cultural milieu was a “cosmos of pure spirituality which discourages distinguishing humans on the basis of religion”.

“India was ruled by innumerable rulers — Pallavas, Chalukyas, Mauryas, Guptas, Kanishka (Kushans) and later the Mughals and British as well. But in no period was India defined on the basis of religion. India was never a Muslim country, Christian country or Hindu country,” he said.

“Why? Because in every period it was believed that India is beyond — very, very ahead — of being religious or a devbhoomi (holy land). It was always a spiritual country. People came here in search of spirituality and still come.”

A Jammu lawyer, Sheikh Shakeel Ahmad, said such remarks were worrying, especially coming from a person who has taken the oath of office under the same Constitution of which the “secular” and “socialist” labels are a part.

“I respectfully disagree with him. These words are the basic structure of our Constitution. This was held by the Supreme Court in its celebrated Kesavananda Bharati judgement,” Ahmad told The Telegraph. “The duty of the chief justice and all judges is to interpret the Constitution.”

Justice Mittal said India had been called the “spiritual capital” of the world, drawing applause from an audience that included advocate-general D.C. Raina.

The chief justice said amendments to the Constitution should be made after proper thought, alluding to the 42nd amendment that introduced the terms “secular” and “socialist”.

He, however, supported the amendment’s incorporation of the fundamental duties, regretting only that they had not been part of the Constitution from the beginning like the fundamental rights.

Last year, a public interest plea was moved in the Supreme Court seeking to remove the words “socialist” and “secular” from the Preamble on the ground of being “antithetical to the constitutional tenets as well as the historical and cultural theme of India”.

It added that the “communist theory of State” did not apply to the Indian context.