Somiya and Shazia, who had filed their nomination papers as Independent candidates, can appeal against the order 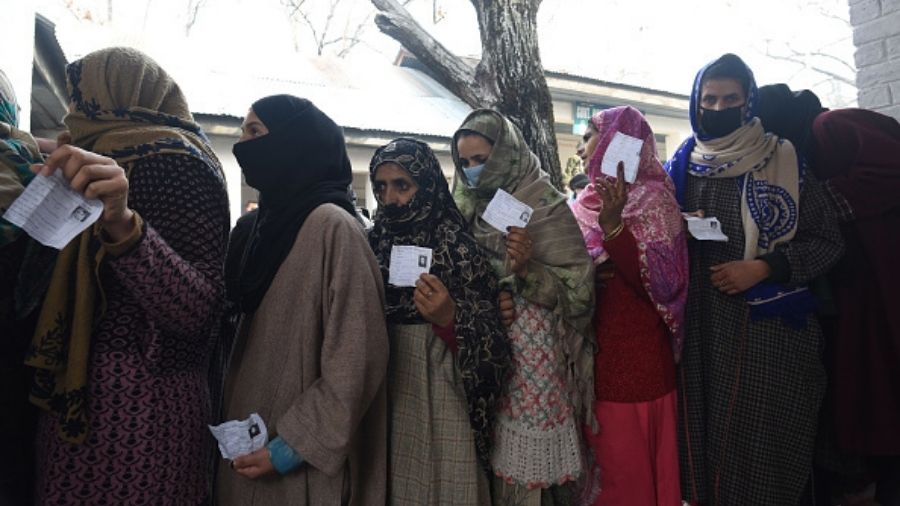 Voters stand in queue during the third phase of the DDC polls at Wurpush area of Ganderbal, Srinagar in December last year.
Getty Images
Muzaffar Raina   |   Srinagar   |   Published 07.03.21, 02:11 AM

Jammu and Kashmir’s election authorities have disqualified from contesting polls two women from Pakistan-occupied Kashmir who are married to Indian Kashmiris, prompting questions over New Delhi’s claim about PoK being an integral part of India.

Somiya Sadaf and Shazia Aslam had contested the District Development Council elections from the Valley’s Drugmulla and Sonawari constituencies in December. They are married to former Valley militants who had crossed the border to receive arms training but returned under the government’s rehabilitation scheme of 2010.

Counting was stopped at both constituencies after complaints were lodged saying the two women were not entitled to contest the elections.

The state election commission has now declared the elections to the two constituencies invalid and ordered a fresh vote.

The two women have been disqualified from contesting elections and orders have been issued to delete their names from the voters’ list.

The commission has said the two women were “reportedly” not from this country and had entered wrong information while declaring their place of birth and citizenship. It said the women had failed to prove their Indian citizenship.

“Now therefore in terms of Rule 21(A) of the Registration of Electors Rules, I960, the name Shazia Begum and Sumiya Bagum are treated as deleted ab-initio from electoral roll of Panchayat Halqa Sadunara-A,” the commission said.

Somiya and Shazia, who had filed their nomination papers as Independent candidates, can appeal against the order.

People’s Democratic Party spokesperson Najmus Saqib said the two women’s disqualification was bizarre in the light of a parliamentary resolution that says the other Kashmir is an integral part of India.

“I see a huge contradiction (between) the claim (by the Centre) and the situation on the ground,” Saqib said.

“In Parliament they claimed that Pakistan-administered Kashmir was an integral part of India and that they would take it back. Now they are denying their own citizens the right to contest elections here.” Women from PoK and Pakistan who live in the Valley allege discrimination on multiple fronts, and have been demanding deportation to Pakistan if they are not accepted as Indian citizens.

Pakistani and PoK wives of Indian Kashmiris have to go through the normal process of acquiring Indian citizenship, after the mandatory waiting period.

However, tens of thousands of people who had migrated from mainland Pakistan to Jammu and Kashmir shortly after Partition were granted domicile and other rights following the abrogation of Article 370 provisions in 2019.

Saira Javaid, a Pakistani woman married to a Kupwara resident, said the latest orders had reconfirmed that the Indian government had no intention of accepting women like her. “In that case, we should be deported to Pakistan along with our husbands and children,” she said.

Saira said some women from across the border had in the past contested panchayat polls and been elected as sarpanch or panch.

“If we can’t contest elections, how were they allowed to do so?” she said. Election officials in Kashmir did not respond to calls or text messages from this newspaper.