Congress colluding with state govt to tarnish the image of our candidate: BJP leaders of Chhattisgarh 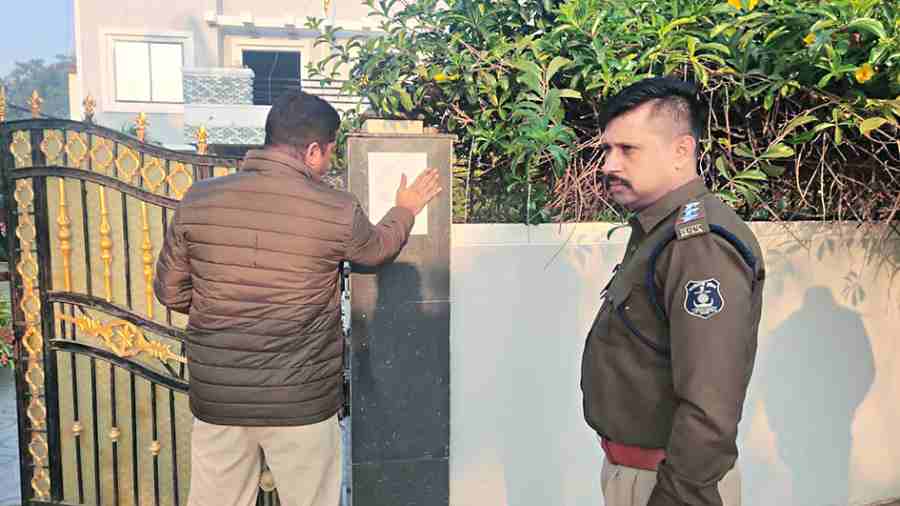 Jharkhand police pasting a notice outside the residence of Brahmanand Netam in Kanker, Chhattisgarh, on Monday.
Bhola Prasad
Animesh Bisoee   |   Jamshedpur   |   Published 30.11.22, 03:24 AM

Jharkhand police have sent a team to Chhattisgarh to search for  Brahmanand Netam, the BJP candidate for the Bhanupratappur bypoll, in connection with a May 2019 case that involved a minor girl being forced into flesh trade and raped by several persons.

The development has led the BJP leaders in Chhattisgarh to claim that the Congress government in the state was colluding with the “friendly” JMM-Congress-RJD government in Jharkhand to tarnish the image of their candidate.

East Singhbhum senior superintendent of police Prabhat Kumar told The Telegraph that it wasn’t unusual to look for an accused years after the registration of a case.

He confirmed that a team of Jamshedpur police had gone to Chhattisgarh to arrest Netam, one of the “other accused” in the case.

“During the course of supervision of a case, it can happen that the police might search for the other accused. It has happened in this case too. The Jamshedpur police had arrested a few persons in this case and a few others were still to be arrested. So a team has gone to Chhattisgarh to question and arrest the remaining accused. For us it is nothing unusual,” Kumar said.

The minor girl, who now stays in a child welfare home and is under the observation of the Jamshedpur district court, had registered the case in May 2019 at Telco thana.

“She was an orphan and used to stay with her sister and brother-in-law. Her brother-in-law forcibly had sex with her and gradually pushed her into sex trade and took her to hotels in Odisha and other parts of Jamshedpur.

A hotelier at Jugsalai in Jamshedpur became suspicious and tipped off the local police in 2019, which led to the unfolding of the heinous crime.

Five persons, including the brother-in-law, were arrested after the girl recorded her statement before the magistrate,” said the police officer on the condition of anonymity.

The case was registered at Telco thana under sections 376A, 376(3), 376AB of the IPC and sections 4/6 of the Pocso Act and sections 4,5,6,7 and 9 of the Immoral Traffic Prevention Act. “Notices were issued by the Telco police against Brahmanand Netam and three others in Chhattisgarh. We are trying to question and arrest them in the case,” Jamshedpur deputy superintendent of police Sumit Kumar, who was part of the team that went to Chhattisgarh, said.

The bypoll in the Bhanupratappur Assembly constituency in Bastar was necessitated by the death of Congress MLA and deputy Speaker Manoj Singh Mandavi.