Addressing media persons, the Jharkhand chief minister claimed that he was a victim of a conspiracy by the opposition 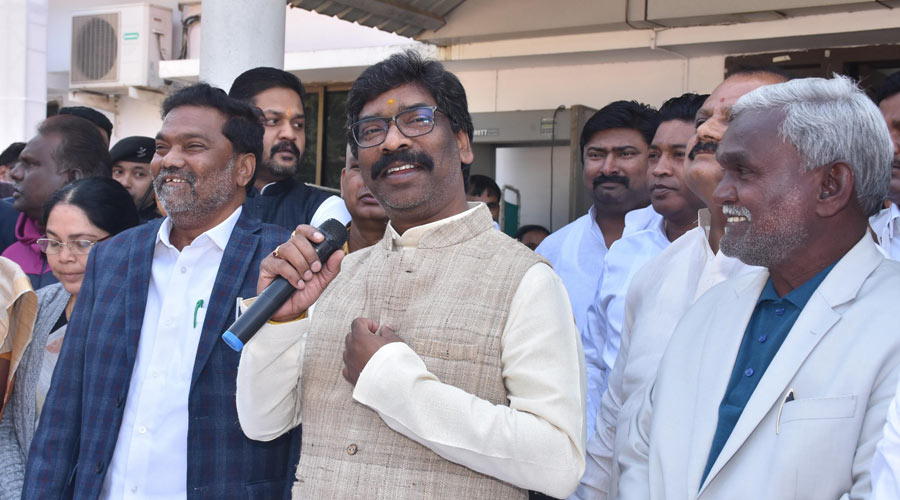 Jharkhand Chief Minister Hemant Soren speaks with media before leaving for Enforcement Directorate (ED) office for questioning in a money laundering case linked to alleged illegal mining in the state, in Ranchi on Thursday.
PTI Photo
PTI   |   Ranchi   |   Published 17.11.22, 11:32 AM

Jharkhand Chief Minister Hemant Soren on Thursday said allegations leveled against him in a mining lease case was baseless as he left for the Enforcement Directorate (ED) office in Ranchi, where he is set to face questioning in connection with the matter.

Addressing media persons, the CM claimed that he was a victim of a conspiracy by the opposition.

"The agency should level allegations only after a detailed investigation into the matter," he said.

The ED summoned Soren at its regional office here for interrogation in a money laundering case linked to alleged illegal mining in the state.

The agency has said it has "identified" proceeds of crime relating to illegal mining in the state to the tune of Rs 1,000 crore till now.

Soren, talking to reporters, said, "If we calculate the yearly revenue from mines and minerals, it would not touch Rs 1000 crore. I am going to ED office and want to see how they arrived at that figure," he told reporters.

Meanwhile, security has been beefed up around the ED office to avoid any untoward incident.

Hemant set to appear before ED