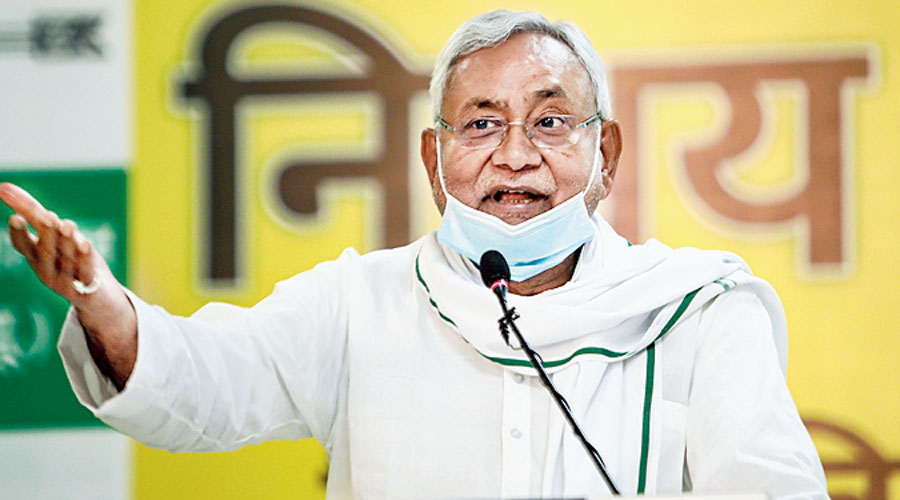 The Janata Dal United reacted with shock and anger at the defection of six of its seven Arunachal Pradesh MLAs to the BJP, calling it an act of treachery by the ally and seeing in the move an attempt by the BJP to assert who is more powerful in Bihar.

At the JDU’s two-day national executive meeting that began in Patna on Saturday, the focus remained firmly on the switchovers as leader after leader expressed disbelief at Thursday’s developments.

JDU leaders from all over the country were supposed to discuss various issues pertaining to the party, including participating in the Bengal Assembly elections next year, but the Arunachal Pradesh setback took centre-stage with the party viewing it as not only back-stabbing by the BJP but also as a threat.

The Bihar Opposition predicted the doom of the JDU and suggested party chief and chief minister Nitish Kumar to look for new allies to stay afloat. “This is treachery. We have been allies and yet the BJP did not give it importance. Moreover, it was in a comfortable position in Arunachal Pradesh and there was no need to do this. We were not even kept in the loop about the development,” a senior JDU leader told The Telegraph on the condition of anonymity before attending the national executive session.

Another JDU leader pointed out that although an “insignificant” development in Arunachal politics, “the defections are like a message to our party in Bihar or an attempt to show who is more powerful”.

The JDU and the BJP are not allies in Arunachal Pradesh. The JDU provides outside support to the BJP government in the northeastern state.

JDU secretary-general K.C. Tyagi expressed displeasure over the developments, saying the action by the BJP was “against the spirit of coalition politics.”

Several senior JDU leaders, including Nitish, who is the party’s national president, have either kept mum or skirted questions on the Arunachal defections, indicating the sense of helplessness in the party and a realisation about the consequences of being the junior partner in the ruling combine in Bihar.

Asked about his views on the defections, Nitish said: “There is nothing like this. We have our meeting and conference now. They (the Arunachal Pradesh legislators) have separated from us.”

The development has come just 45 days after the JDU was reduced to being a junior partner of the BJP in Bihar following the Assembly elections. While the BJP won 74 seats, the JDU bagged just 43. The BJP had played second fiddle to Nitish and his JDU from 2005 to 2020.

JDU sources said the Arunachal blow would be discussed at the meeting though the party may not issue an official statement on it.

Sources in the BJP said Modi and Shah instructed the two leaders to ensure that the party’s participation in the welfare and development projects in Bihar is clearly visible, and that it gets the credit for better work done by the state government.

The BJP said the JDU MLAs had switched sides on their own.

“They followed their wish. What could we have done if they wanted to join our party? However, it is not going to have any impact in Bihar,” deputy chief minister Renu Devi said on Saturday.

The Opposition parties in Bihar rubbed their hands with glee over the latest developments and predicted that the BJP would repeat the Arunachal feat in Bihar.

“The JDU is completely finished due to Nitish Kumar’s wrong decision (to go with the BJP). It has destroyed itself. The party has started to break into pieces and very soon it would be wiped out in Bihar too,” Hasanpur MLA and RJD chief Lalu Prasad’s elder son Tej Pratap Yadav said.

Congress leader Adhir Chowdhury, in a series of tweets, cautioned Nitish about the BJP and asked him to explore new options on the political front.

“Dear Nitish Kumar ji, beware of the BJP, they are well adept and highly skillful in poaching operations like the notorious wild animal poachers of the Northeastern region.

They believe in exclusive political ‘atmanirbhar’. Construction of only BJP and destruction of all non-BJPs is the mantra of the saffron brigade,” Adhir tweeted.

“Before being torn into pieces and to be withered away by the same machination as you are now experiencing in Arunachal Pradesh, Nitish ji, explore new ideas which may include keeping in touch with the Opposition in Bihar as an antidote to withstand the Arunachal syndrome. Under the sun, the thirst of the BJP party’s wholesale aggression cannot be quenched,” he added.