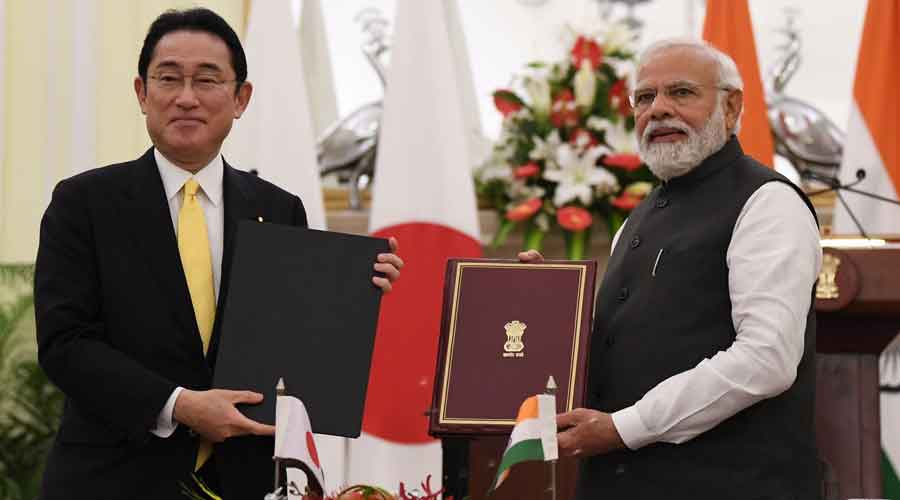 Japanese Prime Minister Fumio Kishida used his India visit on Saturday to highlight the Ukraine conflict, saying the Russian attack had shaken the roots of the international order and Moscow’s attempt to unilaterally change the status quo was unacceptable.

Kishida said this to the media in the presence of Prime Minister Narendra Modi after they had wrapped up their bilateral engagement. Modi, speaking before him, did not mention Ukraine by name but said geopolitical events were presenting new challenges.

Asked by reporters whether India’s position on the Ukraine conflict had become a point of contention within the Quad, of which both India and Japan are members along with the US and Australia, foreign secretary Harsh V. Shringla avoided a direct reply.

He said the Kishida-Modi meeting had offered the two Prime Ministers an opportunity to exchange views on regional and global issues of mutual interest.

The joint statement articulated the points of convergence on the issue. “The Prime Ministers expressed their serious concern about the ongoing conflict and humanitarian crisis in Ukraine and assessed its broader implications, particularly to the Indo-Pacific region. They emphasised that the contemporary global order has been built on the UN Charter, international law and respect for sovereignty and territorial integrity of States….

“They reiterated their call for an immediate cessation of violence and noted that there was no other choice but the path of dialogue and diplomacy for resolution of the conflict….”

Shringla was evasive on whether the issues of sanctions on Russia, and India purchasing discounted Russian crude oil, had come up at the meeting.

India is alone in the Quad in not condemning Russia and by all indications, New Delhi is sticking to its nuanced position on the Ukraine situation.

Modi is scheduled to have a virtual summit with Australian Prime Minister Scott Morrison on Monday, where Ukraine is expected to come up.

Even before he had landed in New Delhi in the afternoon, Kishida had made it clear that Ukraine was a priority area for him. In an article in The Indian Express, the Japanese Premier said: “Russia’s invasion of Ukraine is a clear violation of international law as well as an attempt to unilaterally change the status quo by force, and it is totally unacceptable.”

“Upholding the core principles of the international order is indispensable from the perspective of diplomacy and security in the Indo-Pacific, where the situation has been rapidly worsening. Japan will unite with the international community and take resolute actions.

“In the recent Japan-Australia-India-US (Quad) Leaders’ Video Conference, in which Prime Minister Modi and I participated, we concurred that any attempt to unilaterally change the status quo by force, such as this time, must not be tolerated in the Indo-Pacific region, and that it is precisely because of this situation that it is critical to further promote efforts toward the realisation of a ‘Free and Open Indo-Pacific’.”

The two Premiers also exchanged views on China, with Modi updating Kishida on the developments in Ladakh and iterating that there would be no return to business as usual with Beijing until peace and tranquillity were restored in the border areas.

Kishida shared the Japanese perspective on the East and South China Seas.

On the business side, Modi announced that Japan would invest 5 trillion yen or Rs 3.2 lakh crore in India over the next five years. As part of the India-Japan Clean Energy Initiative, Japan’s Suzuki Motor Corp will set up a plant to make batteries for electrical vehicles in Gujarat.

Three memorandums of cooperation were signed, including one to introduce the Johkasou technology in India by Japanese companies for decentralised waste water treatment.