Administration has made arrangements for night stay and meals of stranded passengers, says Deputy Commissioner 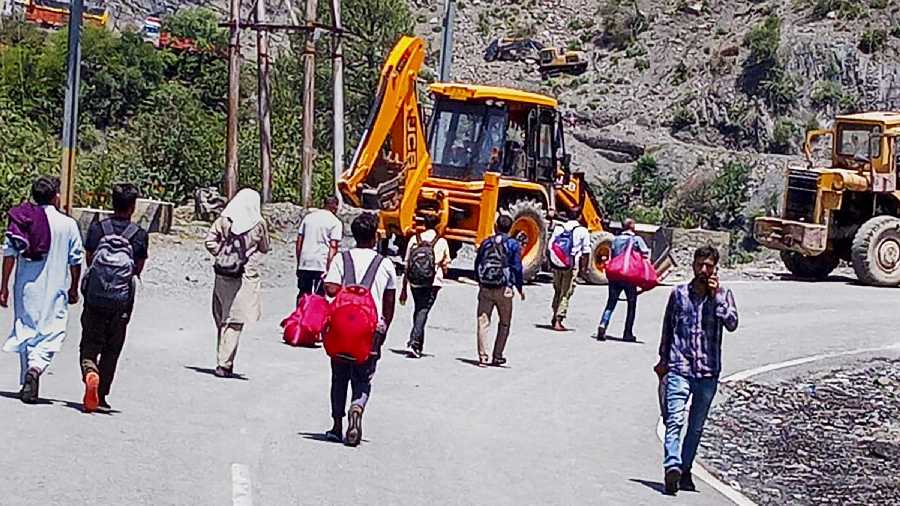 People walk on foot after the National Highway was blocked following landslides due to rains, in Ramban sector
PTI picture
Our Bureau, PTI   |   Jammu   |   Published 24.06.22, 01:02 PM

The Jammu-Srinagar national highway was closed for the fourth consecutive day on Friday even as agencies stepped up efforts to restore traffic by blasting boulders blocking roads, officials said.

The highway was blocked due to landslides, mudslides and shooting stones at 33 places in Ramban and Udhampur districts apart from washing of a 150-feet long road stretch and an under-construction bridge due to flash-floods triggered by heavy rains.

"Srinagar-Sonamarg-Gumri road closed for repair and maintenance. However Mughal road through for vehicular movement", the traffic department said.

Explosives were used to blast boulders that were hampering the ongoing restoration work on the highway on Thursday evening.

"The restoration work in Banihal-Ramban-Udhampur section is on a war footing amid blasting of rocks that have hampered restoration efforts in Udhampur district", an official said.

The highway was closed for traffic due to shooting stones at Panthiyal on Tuesday.

Deputy Commissioner, Ramban, Mussarat Islam, who is personally monitoring the road clearance operation, said the administration has made arrangements for the night stay and meals of stranded passengers.

He appealed to commuters to contact traffic control rooms before starting their journey on the highway.