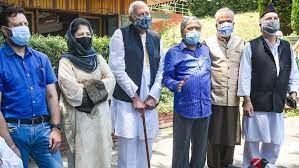 Leaders of the five-party People’s Alliance for Gupkar Declaration met for the first time here to discuss the outcome of the June 24 all-party meeting with Modi
File picture
Muzaffar Raina   |   Srinagar   |   Published 06.07.21, 01:46 AM

The alliance fighting for restoration of special status of Jammu and Kashmir on Monday belatedly announced that the recent meeting with Prime Minister Narendra Modi was disappointing and said Assembly elections must be held only after statehood is restored.

The alliance has also decided to reach out to other parties who favour restoration of statehood and seek their support for evolving a common position — which is that statehood should precede the elections.

Leaders of the five-party People’s Alliance for Gupkar Declaration met for the first time here to discuss the outcome of the June 24 all-party meeting with Modi, the first outreach towards Jammu and Kashmir politicians after the August 5, 2019 abrogation of Article 370 and bifurcation of the state into two Union Territories.

“All the members of the PAGD expressed their disappointment at the outcome of the Delhi meeting,” CPM state secretary M.Y. Tarigami, the alliance’s spokesman, said in a statement.

Tarigami said Delhi has not taken any confidence-building measures such as releasing political and other prisoners from jails or taken concrete steps “to end the siege & atmosphere of suppression that has choked J&K since 2019”.

“This would have initiated the much needed process of reaching out to the people of J&K who are the biggest stakeholders & sufferers of the J&K problem,” the statement said.

It said the BJP had committed on the floor of Parliament to restore statehood and they “must honour their word”.

“So any Assembly election must be held only after restoration of full statehood for J&K. To this end, the PAGD has decided to reach out to other political parties in J&K with a view to taking a common position on the issue,” Tarigami said.

Earlier, the National Conference, which is the key constituent of the alliance, had favoured Assembly elections after restoration of statehood, indicating the party was warming up for business with the Centre that is firmly against any rethink on Article 370. It seems that other parties are now also favouring the option.

National Conference MP from Anantnag, Hasnain Masoodi, said there was now consensus within the alliance that Assembly elections should follow the restoration of statehood.

“For that we thought we should reach out to other parties who do not agree with us in seeking restoration of the August 4 position (restoration of Articles 370 and 35A) but want restoration of tatehood. What is wrong if we join hands for that and fight for statehood only after elections,” Masoodi told The Telegraph.

The Modi government has promised to restore statehood but favours delimitation, which will carve out more seats, and Assembly elections to precede that. It is widely believed the Centre wants to allot more seats to Hindu-majority areas of Jammu through delimitation so that its goal of getting a Hindu chief minister is fulfilled. It perhaps explains why the Centre is ready to give statehood after elections.

Masoodi said his party is committed to restoration of autonomy (the 1952 position when the state had its own Prime Minister) but parties in the alliance have their own positions.

“Despite our position on autonomy, the parties of the alliance have come together for restoration of Article 370. Now we want to join hands with those who are at least fighting for restoration of statehood,” he said, clarifying they are also ready to talk to Jammu-based groups.

Tarigami said it was the considerate view of all alliance partners that the meeting with the Prime Minister was disappointing.

“The chairman of the alliance, Farooq Abdullah, had called for a meeting immediately after our return from Delhi. But Mehboobaji was busy with some personal engagements for which the meeting was delayed. Otherwise, we all believe that the meeting was disappointing because Government of India has not given us any concrete assurance, a confidence-building measure which can generate some hope,” he told this newspaper. “We raised the question of releases (of prisoners). The home minister (Amit Shah) said the LG (lieutenant governor) has been told to review the cases. For the last many days, how many prisoners have been released?”

Tarigami said the only good thing about the meeting was that the Prime Minister reached out to the politicians for the first time in years. “It was a good beginning. Till yesterday we were a gang and now all of a sudden we have become respectable. This is the little change but then there is a question of delivery.”

The alliance has reiterated its commitment to fight together to reverse the “unconstitutional and unacceptable changes foisted on the people of J&K on 5th August, 2019, using all constitutional, legal and political means at its disposal”.