On August 30, Rahul tweeted that bombs are going to explode in France. How did he come to know about that? Jaitley asks 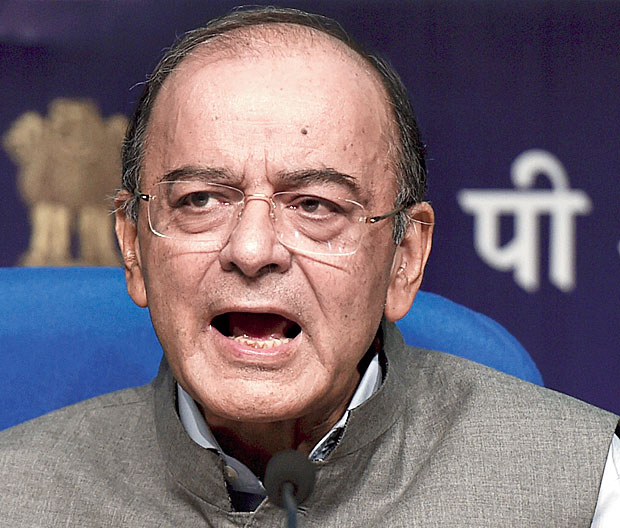 Prime Minister Narendra Modi has kept himself away from the Rafale fight path and airdropped his idiom-admiring blogger-in-chief into the middle of the fire-fight.

Finance minister Arun Jaitley made a lengthy Facebook post and gave an interview in Hindi as well as English to a news agency on Sunday, claiming a “jugalbandi” between Rahul Gandhi and former French President Francois Hollande who had prised open a can of worms when he spoke to the Paris-based online journal Mediapart last week.

The finance minister hastened to add that he had no proof. The following are some of Jaitley’s assertions and how they measure up against information available so far in the public domain.

Jaitley posted on Facebook: “A controversy is sought to be created on the basis of a statement made by… Hollande, that the Reliance Defence ‘partnership’ with Dassault Aviation was entered at the suggestion of the Indian government. In a subsequent statement, the former President has sought to suggest that Reliance Defence emerged on the scene after the agreement with the Indian government was entered into. He has, in a subsequent statement, said that he is ‘not aware’ if the government ever lobbied for Reliance Defence and that ‘the partners chose themselves’. Truth cannot have two versions….

“His second statement in Montreal, Canada, to AFP (a news agency) makes the veracity of his first statement even more questionable.”

Question: Hollande may be making the statement to protect himself from a conflict of interest scandal back home but has he really changed his statement?

Hollande’s full statement in Canada — only a part of it was accessible to most Indian media, including The Telegraph — suggests that he not only stood by his earlier statement but added a detail that can cause more damage to the Modi government.

The Scroll, an Indian news portal, translated and reported the full statement from Le Monde, the respected French newspaper: “Asked by Agence-France Presse on the sidelines of a conference in Montreal on Friday, Hollande said that the name of Reliance Group had appeared as part of a ‘new formula’ in negotiations over the Rafale deal, decided by the Modi government after it came to power.

“Asked if he knew whether India put pressure for the Reliance Group to work with Dassault, Hollande said that he was ‘unaware’ and ‘Dassault alone is capable of answering’, anxious to not intervene in the Indian controversy.”

The full statement brings into play a “new formula”, with which is linked the choice of Reliance.

Even if Jaitley had been unaware of the full statement, there was nothing in Hollande’s truncated statement either that suggested a U-turn. He merely iterated that the French government had no role.

Besides, Hollande just said he was “unaware” of pressure from India. As Arun Shourie, veteran editor, former BJP minister and a critic of the current regime, told NDTV on Saturday, no “pressure” would have been needed. France and Dassault were desperate for the order and a mere indication from the Indian leadership that it preferred a particular company would have done the needful.

What Modi needs to prove conclusively is that the name of Reliance was not suggested by the Indian government to Hollande or anyone else in the French government — this is the crux of the matter.

Question: Are the statements as categorical as Jaitley is claiming? Neither France nor Dassault has categorically stated that the Indian side did not suggest Reliance’s name.

The French government and the company have restated the obvious. France cannot choose a private company’s partner, and Dassault alone can select its partner. The question is what prompted Dassault to pick Reliance.

In any case, any certificate from France and Dassault cannot be a clean chit. Both have high stakes in the Rafale deal and they cannot be expected to say anything that will endanger the deal.

As an eminent lawyer, Jaitley is well aware of the concept of conflict of interest. Yet, he chose to wave with pride fig leaves from two interested parties.

Shourie told NDTV on Saturday that the French statements were cleverly worded, adding: “If you threaten them by merely raising your eyebrows that the order may be cancelled, they will give you any statement today.”

On Sunday, asked if the Rafale fighter jet deal would be cancelled in view of the general election, Jaitley told ANI: “Koi prashna nahi uthta. Ye fauj ki avashyakta hai. Ye desh mein aana chahiye, aur ye aayega (No question of scrapping the deal. These are needed by the defence forces. They should come and they will come).”

Jaitley told ANI: “I am surprised…. On August 30, he (Rahul) tweeted that bombs are going to explode in France (over the Rafale deal). How did he come to know about that? Though I do not have any proof of this jugalbandi, but this creates suspicion in mind…. There is definitely something.… a statement comes (from Hollande), then it is contradicted. But he (Rahul) predicted this to happen 20 days in advance.”

The minister was more circumspect when he put it down in writing, choosing the word “rhyme” instead of “jugalbandi”.

“It is no coincidence that on 30.8.2018 Shri Rahul Gandhi had tweeted that ‘Globalised corruption. This #Rafale aircraft really does fly far and fast! It’s also going to drop some big bunker buster bombs in the next couple of weeks’. The former French President’s first statement rhymes with Rahul Gandhi’s prediction,” Jaitley posted.

Question: It is not clear why Jaitley, a lawyer by profession, chose to make a grave allegation and say in the same breath he does not have proof. The statement stands out, especially against the backdrop of Jaitley filing defamation cases against those who level allegations against him without proof.

If indeed Rahul persuaded Hollande to speak out, Jaitley is contradicting his own description of Rahul as a “Clown Prince” and crediting the Congress chief with skills so far the BJP has been unable to detect. Will a “Clown Prince” be able to pull off such an operation while the Narendra Modi government is maintaining eternal vigil?

Asked about the quality of discourse against the backdrop of Rahul referring to Modi as “thief” and the finance minister calling the Congress leader “Clown Prince”, Jaitley drew a distinction between idiomatic taste and vulgarity.

Jaitley told ANI: “I would have very much appreciated if not only the quality of the discourse but also the quality of idiom reflects some level of intellect. We all write… we all make criticism but the criticism and the comment are intended to raise the quality of public discourse both in quality, its content and in the turn of phrases and the idiom that you use. That at least somebody appreciates it.

“But if you are only bent upon bringing down the discourse to the level of vulgarity, you hug somebody, you wink at somebody, you repeat a lie 300 times, then what do I call that?”

Question: Jaitley’s partiality for the idiom and the neat turn of phrase is admirable. But does it mean that calling your political opponent a “Clown Prince” will from now on be treated as a sign of “some level of intellect”?