Instead of taking Opposition leaders into confidence or appointing a joint parliamentary committee, the government has chosen silence and bluster 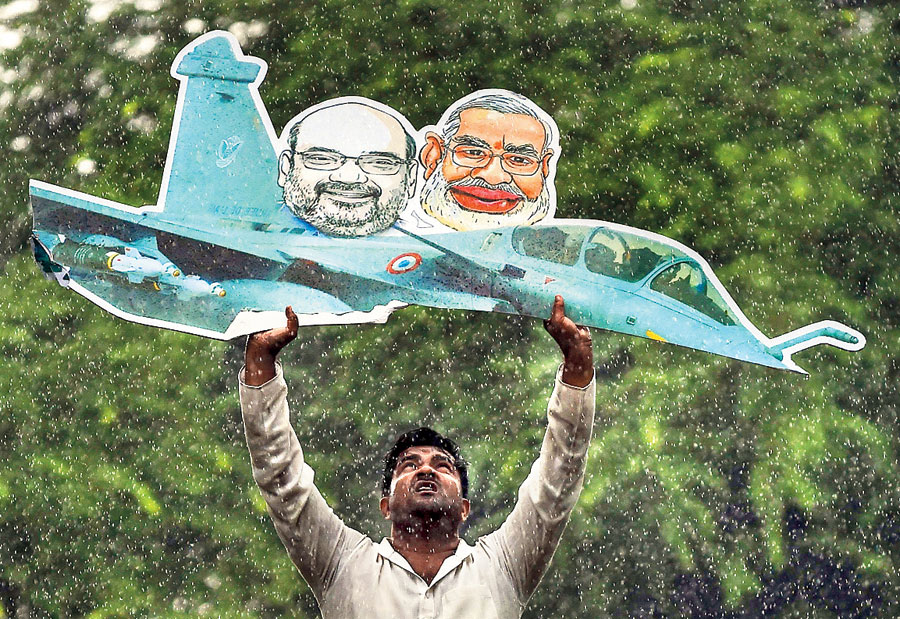 François Hollande does not have the dashing good looks or rakish charm of, say, Imran Khan or Bill Clinton or even Nicolas Sarkozy. Yet, the seemingly drab and dour socialist leader — who rose to become the president of France for five years — has provided much fodder to the French media with his rather colourful love life.

Hollande’s three-decade long partnership with fellow socialist, Ségolène Royal, ended in June 2007, a month after Royal fought and lost the presidential election. Hollande then had a relationship with a well-known French journalist, Valérie Trierweiler, who moved in with him to Elysee Palace when he was elected president in May 2012.

That affair ended when a French tabloid broke the story of Hollande’s secret trysts with the actress, Julie Gayet. Since this was France and not America, the revelation caused no harm to his presidency. Hollande soon announced his separation from Trierweiler, and Gayet and he made their relationship official.

In ordinary circumstances, the personal life of a foreign leader should hold little interest for us in India — except, perhaps, to marvel at the openness and lack of hypocrisy in French society. But today, it assumes great significance because a bombshell of a revelation has hit the Narendra Modi regime, thanks to the Hollande-Gayet relationship.

In an interview to a Paris-based website, Mediapart, on September 21, the former French president revealed that it was the Indian government that had proposed the name of Anil Ambani’s Reliance Defence as the offset partner in the Rafale fighter aircraft deal. Top ministers of the Modi government, led by the defence minister, Nirmala Sitharaman, and the finance minister, Arun Jaitley, have strenuously denied the repeated charge made by the Congress president, Rahul Gandhi, that Anil Ambani was favoured with thousands of crores of business as part of the Rafale deal. The government had no role in the decision; the choice of Reliance was made by the French manufacturer, Dassault Aviation, they insisted.

But François Hollande, who signed the deal for 36 Rafale fighter jets, was categorical in his statement. “We didn’t have a say on the subject. It was the Indian government which had proposed this service group [Reliance] and Dassault which negotiated with Ambani. We did not have the choice. We took the interlocutor who was given to us. That’s why, in other circumstances, this group could not be avoided in spite of everything.”

Hollande made this disclosure to refute the allegation that he may have favoured the junior Ambani as a quid pro quo for a business deal struck by his partner, Julie Gayet. Last month, The Indian Express reported that on January 24, 2016, Anil Ambani’s Reliance Entertainment entered into a deal with Julie Gayet’s firm Rouge International to jointly produce a French film. Two days later, Hollande — in New Delhi as the chief guest for the Republic Day parade — signed a memorandum of understanding with Narendra Modi for the purchase of 36 Rafale jets. Some months later, Anil Ambani’s Reliance Defence officially became part of the offset programme of the Rs 59,000 crore Rafale deal through the Dassault Reliance Aerospace Limited — a company in which Ambani holds a 51 per cent stake and Dassault the remaining 49 per cent.

While the French media is not too concerned with the political storm raging in India over Rafale, it does take “conflict of interest” issues concerning its leaders seriously. The Mediapart interview with Hollande, therefore, referred to the Indian Express report of the film deal between Reliance and Gayet’s company. It is then that Hollande revealed that the Indian government had proposed the name of the company. “That’s why, on the other hand, this group [Reliance] did not have to give me any thanks for anything. I couldn’t even imagine that there was any connection to a film by Julie Gayet,” the former president said.

Although Hollande did not reveal who in the Indian government proposed Ambani’s firm, the firmness with which he made the assertion points the finger of suspicion towards people in very high places.

In spite of the government’s stonewalling, questions on the Rafale deal have only become louder in recent months. The Opposition has accused the prime minister of bypassing due process to strike a deal with France which involved a much higher price per aircraft than the price that was negotiated by the previous United Progressive Alliance government, far fewer aircraft, and a huge bonanza to Anil Ambani, whose firm — with zero experience in defence equipment manufacture — has replaced the public sector company, Hindustan Aeronautics Limited, which was earlier chosen to build the Rafale jets in India.

The government could have quelled the controversy and stopped it from becoming a mega scandal by taking Opposition leaders into confidence about the details of the agreement or appointing a joint parliamentary committee to study it. Instead, it has used a combination of silence — a dogged refusal to reveal the price of the aircraft, for instance — and bluster to counter the charge of wrong-doing.

This tactic of obfuscation has begun to unravel. If the ex-president of France has forcefully contradicted the government’s claim that it had nothing to do with the choice of Anil Ambani, the ex-chairman of HAL has refuted Nirmala Sitharaman’s charge that the public sector company’s poor health was partly responsible for the failure to clinch the Rafale deal during the UPA regime.

T. Suvarna Raju, who retired as HAL chief on September 1, in an interview to Hindustan Times last week said, “When HAL can build a 25-tonne Sukhoi-30, a fourth-generation fighter jet that forms the mainstay of the air force, from raw material stage, then what are we talking about? We could have definitely done it (license produced the Rafale jets.)” Not just Sukhoi, HAL had maintained the Mirage 2000 aircraft, manufactured by Dassault Aviation, for the last 20 years and was involved in the Mirage upgrade programme too, Raju said.

Countering Sitharaman’s claim that HAL was “dropped” from the deal when the UPA was in power because it could not agree on the terms of production with Dassault, the ex-chief said, “Dassault and HAL had signed the mutual work-share contract and given it to the government. Why don’t you ask the government to put the files out in public? The files will tell you everything.”

That is unlikely to happen. Instead, the defence minister — forced to speak up on a deal that only the prime minister can throw light on — keeps making statements that defence experts find bemusing. For instance, she has justified the Modi government’s decision to buy 36 Rafale fighters in “flyaway” condition on grounds that the air force would not have the “paraphernalia” to induct more than two squadrons (of 18 aircraft each) at a time. This argument flies in the face of the fact that four IAF chiefs had asked for a minimum of 126 fighters, that the air force is way short of its authorized strength of 42 fighter squadrons and that it has ample experience of creating infrastructure to keep pace with induction.

And you don’t have to be an expert to see through her claim that due process was followed in securing the deal. The actual signing may have taken place in September 2016 after the cabinet committee on security formally approved it, but Narendra Modi jumped the gun in April 2015. On his first visit to France, Modi unilaterally announced that India would buy 36 Rafale fighters. Three months later, the earlier agreement with Dassault for 126 jets was cancelled, and HAL was cut out of the picture. The CCS had not been consulted. And the then defence minister, Manohar Parrikar, did not accompany Modi to Paris on that trip. Anil Ambani, incidentally, did.

Back in April 2015, less than a year after his sweeping victory, the prime minister had the swagger of a conquering hero who could do as he pleased — no questions asked. He had, after all, vanquished a “corrupt” political class and ushered in a new dawn. With revelations tumbling out on Rafale every day, that promise of running a clean and transparent government is shattering around him...