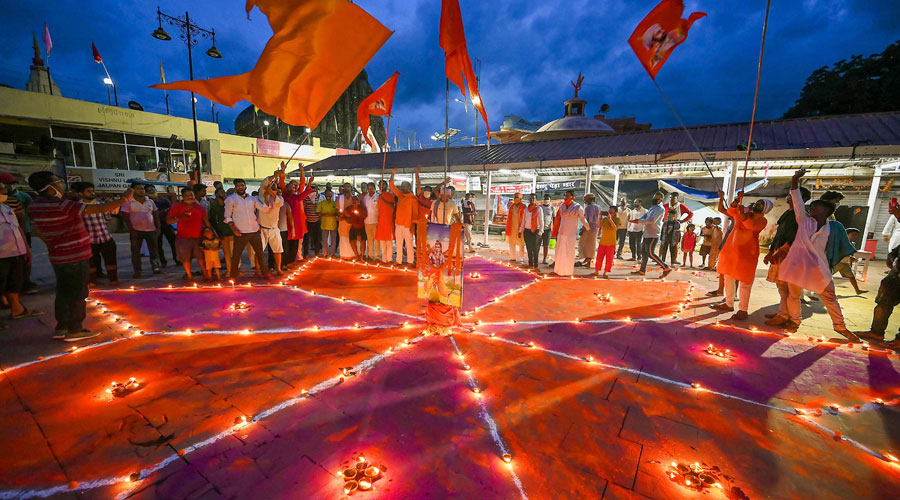 Prime Minister Narendra Modi on Wednesday began his address with “Jai Siya Ram” and urged his audience to join him, but hours later his ministers and party president were continuing to stick to the strident Hindutva war cry of “Jai Shri Ram”.

Political commentators said Modi’s choice of the gentler “Jai Siya Ram” seemed to signal that with the battle for the Ram temple won, the focus was now on peace and harmony.

If so, the message seemed not to have percolated to his lieutenants.

Modi’s right hand man and home minister Amit Shah, who saluted the “sacrifice and struggle” of the Ram bhakts that had made the temple possible, ended the tweet with “Jai Shri Ram”.

Party president J.P. Nadda used the same slogan in his tweet about the “historic” day.

Textile minister Smriti Irani had on Tuesday evening changed her Twitter profile picture to show a warrior Ram shooting an arrow. She had tweeted the new image with the slogan “#JaiShriRam”. The picture was there on Wednesday as well.

“Jai Siya Ram”, the most popular salutation among Hindus in northern India for centuries, had got replaced with the aggressive “Jai Shri Ram” promoted by the VHP, Bajrang Dal and the BJP during the temple movement three decades ago.

Sangh parivar activists had put up posters in Ayodhya asking Hindus to discard “Siya Ram” and “Sita Ram” and chant “Jai Shri Ram”. The traditional images of a smiling Ram alongside Sita made way for pictures of a solitary, angry-looking warrior.

Mythologist and author Devdutt Pattanaik had summed up the difference between the two chants in a tweet a year ago.

“Hinduism/Raj-dharma = Jai Siya Ram, with love. Hindutva/Rajneeti = Jai Shri Ram, with rage,” he had tweeted, underlining that the BJP and the Sangh parivar had used “Jai Shri Ram” as a political tool.

“The call of ‘Jai Siya Ram’ is resonating not only in the city of Lord Ram but throughout the world today,” Modi said on Wednesday.

“Ram is everywhere; Ram belongs to all.... Social harmony was the core principle of Lord Ram’s governance.”

Some BJP insiders felt that Modi’s “Jai Siya Ram” chant was a tactical move to reach out to Islamic countries, and the world in general, and disarm those who see the Ram temple as an assertion of aggressive majoritarianism.

At home, they said, Modi wanted to assure Muslims that they need not fear any more now that the Ram temple had been achieved.

However, a senior BJP politician argued that the softer chant was just a “temporary diversion”.

“Nobody can direct the Hindutva cadres to calm down. There are many other things on the agenda,” he said, referring to the call for a uniform civil code and potential temple campaigns in Mathura and Kashi.

The Sangh parivar claims that a mosque encroaches on the birthplace of Lord Krishna in Mathura and another on the alleged ruins of the original Kashi Vishwanath temple in Varanasi.

Delhi BJP politician Kapil Mishra, accused by many of inciting the February riots, had tweeted two suggestive pictures on Tuesday of Kashi and Mathura, appearing to indicate that they were now on the agenda.

Although the BJP and the parivar have officially said their focus was now solely on Ayodhya, demands relating to Kashi and Mathura in the coming days cannot be ruled out.