Amid rising tensions between Ukraine and Russia, Air India operated a Boeing 787 aircraft to bring back them from the eastern European country 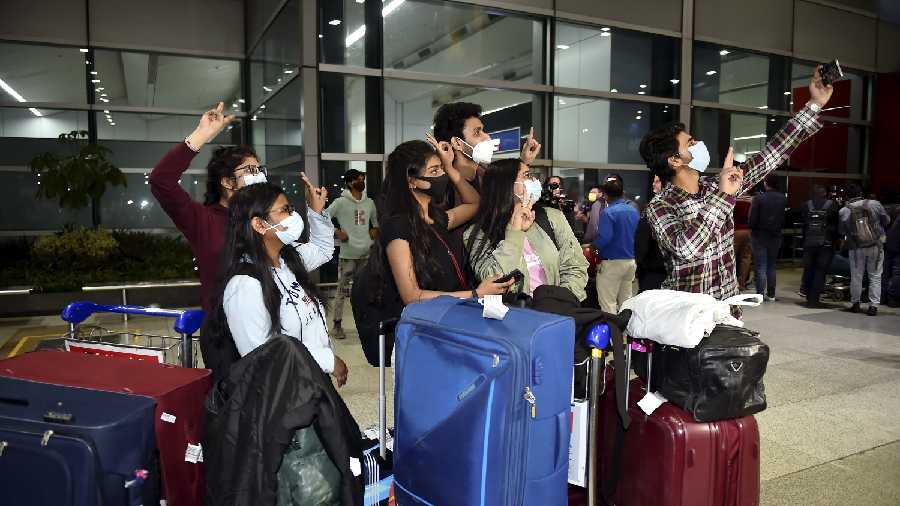 Indian nationals take selfie upon their arrival at the IGI Airport by an Air India flight from Ukraine amid rising Russia-Ukraine tension, in New Delhi.
PTI.
Our Bureau, PTI   |   New Delhi   |   Published 23.02.22, 09:37 AM

Indian students, largely those studying medicine, hailing from Delhi to Gujarat on Tuesday night arrived here from Ukraine and said they were happy to be back in their home country amid escalating tensions between Russia and the eastern European country.

Most of the students, PTI spoke to soon after their arrival, said they followed the advisory issued by the Indian Embassy in Kyiv.

Anil Rapriya, 22, a fourth-year MBBS student at the Kharkiv National Medical University (KNMU) in Kharkiv city, just after landing at Delhi airport, said, “I am feeling happy to back in my country”.

“There is nothing to panic there. I have just moved to India as the Indian Embassy asked us to leave the country temporarily given the evolving situation in Ukraine,” he told PTI on phone soon after landing.

His family lives in Nangloi in Delhi.

“He went for his MBBS course in 2018. I spoke to him on phone after he landed at the Delhi airport. We are glad that he’s back, as the situation can change given the tensions between Russia and Ukraine,” Manish said.

Manish, 21, is pursuing his MA in political science from IGNOU.

In recent weeks, tensions have been escalating between Ukraine and Russia, and on Monday, Russia recognised the independence of two separatist regions in the eastern Ukraine.

A group of medical students arrived in a batch at the Delhi airport, taking Turkish Airlines from Kyiv to Istanbul and then to Qatar, and then from then to Delhi via Qatar Airways.

Kirtan Kalathiya, Nirav Patel, Vinit Patel from Bhavnagar and Krish Raj from Surendra Nagar in Gujarat were among the students who also arrived at Delhi from Ukraine.

“We all study at the Bukovinian State Medical University (BSMU) at Chernivtsi. We have informed our college authorities that we are leaving and, classes will now be online. Things are fine in Chernivtsi, as it is quite far from the border area,” Raj told PTI.

Apoorva Bhushan from Ranchi and Hardik Dogra from Rajkot study at Bogomolets National Medical University in Kyiv. They arrived in Delhi via an Air India flight AI 1946 around 11:40 PM.

Bhushan said, “We had received the Indian embassy advisory on our official WhatsApp group. It said students should leave the country temporarily given the current situation in Ukraine, so, we followed the advisory and left”.

He also showed a copy of the advisory circulated in the official WhatsApp group.

“Students are advised in the interest of their safety to leave Ukraine temporarily, rather than wait for official confirmation from universities,” reads the advisory.

At Delhi airport, many Indian students who had just arrived from Ukraine were seeing thumbing the Instagram page of Kyiv Post on their mobile phones, while others said, they were trying to avoid any kind of news.

Earlier, the Air India plane had left the national capital at around 7.30 am and landed at the Kyiv airport at about 3 pm (IST).

In a tweet at about 9.46 pm, Minister of State for External Affairs V Muraleedharan said around 250 Indians and students belonging to various states are returning from Ukraine to Delhi tonight.

"More flights in the coming days to help Indians return," he said.

According to a civil aviation ministry official, some other Indian operators are also expected to operate flights to Ukraine depending on the demand.

Air India, on February 19, announced that it would operate three flights between India and Ukraine on February 22, 24 and 26.

Russian President Putin on Monday signed decrees to recognise Ukraine’s regions of ‘Donetsk and Luhansk People’s Republics’ as “independent”, escalating the tension in the region and increasing fears of Moscow’s invasion of Ukraine.