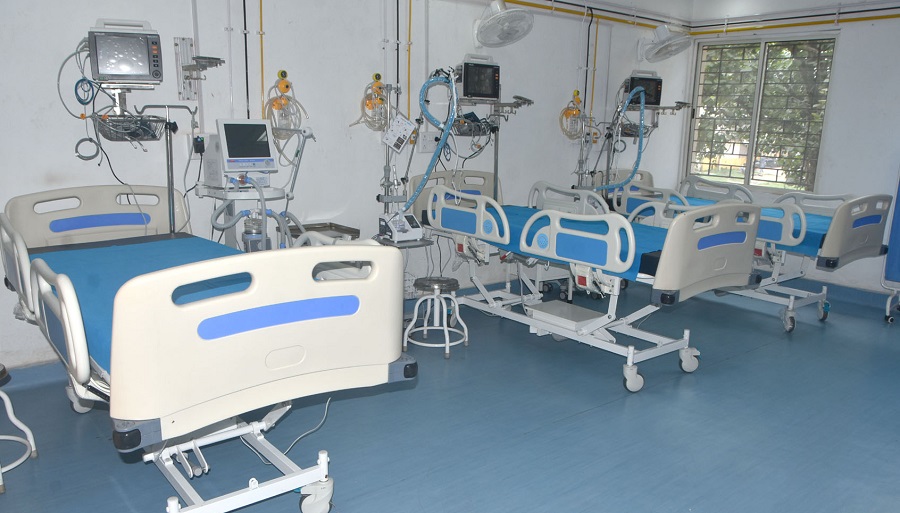 In a bid to help Delhi in its fight against the rising cases of Coronavirus, Indian Railways have decided to make available coaches with 800 beds at a station here to be used as Covid care-cum-isolation facilities while as many as 45 doctors and 160 paramedics of the paramilitary forces are on standby in the national capital for deployment on Covid-19 duties, the Union Ministry of Home Affairs (MHA) said on Wednesday.

The Defence Research and Development Organisation (DRDO) is going to add 250 ICU beds to the existing 250 in addition to creating 35 BIPAP beds in the next 3-4 days at its Covid-19 hospital near the Delhi airport, a home ministry spokesperson said.

These developments come in the wake of 12 decisions taken at a high-level meeting chaired by Union Home Minister Amit Shah on Sunday after Delhi saw fresh spike in Covid-19 cases.

The spurt in coronavirus cases in Delhi has been witnessed since October 28 when the daily rise breached the 5,000-mark for the first time and it crossed the 8,000-mark on November 11.

Delhi recorded 6,396 fresh Covid-19 cases on Tuesday, taking the infection tally in the national capital to over 4.95 lakh, even as 99 new fatalities pushed the toll to 7,812, authorities said.

The rising coronavirus cases in Delhi are attributed to the festive season, non-compliance of COVID-19 safety behaviour and rising pollution in the city.

Forty-five doctors and 160 paramedics from paramilitary forces have arrived in Delhi for deployment at DRDO hospital near Delhi airport and at a COVID care centre at Chhatarpur, the spokesperson said.

More doctors and paramedics will reach Delhi in the next few days.

The home ministry has constituted 10 multi-disciplinary teams to visit more than 100 private hospitals in Delhi for assessing bed utilisation and testing capacity and to identify extra ICU beds. Visits by the teams are underway.

The Railways is making available coaches with 800 beds at Shakur Basti railway station while doctors and paramedics from paramilitary forces will man the coaches which will act as Covid care-cum-isolation facilities.

The Indian Council of Medical Research (ICMR) and the Delhi government are working together to enhance RT-PCR testing capacity to 60,000 tests by end of November.

Testing capacity has already been enhanced by 10,000 tests per day on November 17, the spokesperson said.

The planning for house-to-house survey in Delhi is in the advanced stage. The survey is expected to begin by the end of the week and completed by November 25.

According to the spokesperson, Bharat Electronics Limited (BEL) has dispatched 250 ventilators from Bengaluru and these are expected to reach Delhi by the end of the week.

The Union health ministry has delivered 35 BIPAP machines to DRDO Covid facility near the Delhi airport.

To bring testing closer to Delhi residents, the ICMR will help Delhi government in deploying 10 mobile testing laboratories with a total capacity of 20,000 tests in a phased manner beginning next week.

The ICMR will also help in augmenting capacity by 2,000 tests of existing Delhi laboratories by deploying more manpower, increasing number of shifts and placing more equipment and through engagement with private sector laboratories so that per day 60,000 RT-PCR tests could be done by November end.

Orientation meeting of deputy commissioners, municipal corporations officials and other stakeholders were conducted by the union health ministry.

As many as 25 BIPAP machines for the Delhi government will be provided by health ministry, the spokesperson said.

Sunday's meeting was convened in the wake of the rising number of cases, which is being called the 'third wave' of Covid-19, in Delhi and it noted the increasing strain on medical infrastructure in the city.

Apart from Shah, those who attended the meeting include Delhi Lieutenant Governor Anil Baijal, Chief Minister Arvind Kejriwal and Union Health Minister Harsh Vardhan among others.

It was the second major intervention by Shah, who had stepped in and announced several steps in June to check the rising number of Covid-19 cases in the national capital after criticism in different quarters of the Delhi government's handling of the crisis.

Shah had said that the situation of Covid-19 in Delhi, as also in the neighbouring areas of the National Capital Region (NCR), would be reviewed on a continuous basis over the coming weeks.

The highest single-day spike of 8,593 cases till date here was recorded on November 11 when 85 fatalities were recorded.

Ninety-nine fatalities were recorded, pushing the toll in the national capital to 7,812.

The total number of cases has climbed to 4,95,598, while the recovery rate stood at over 89 per cent.

The number of containment zones in Delhi increased to 4,449 on Tuesday.

The National Centre for Disease Control, in a report drafted recently, had warned that Delhi needed to be prepared for about 15,000 fresh Covid-19 cases per day, taking into account the winter-related respiratory problems, a large influx of patients from outside and festive gatherings.

In June, when the number of Covid-19 cases was on the rise in Delhi, there were complaints of non-availability of beds in hospitals and difficulty in getting tests done in laboratories.

Leading from the front, the home minister ensured that the facilities were augmented by increasing the numbers of daily testing, hospital beds and setting up of temporary hospitals and COVID care centre.

A committee set up by Shah also fixed the rates for testing, beds in private hospitals, ICUs and isolation beds.