Indian Army capable of befitting reply to every challenge: Rajnath

The defence minister, however, desisted from naming China, a policy Modi has been following through the 13-month border standoff with the neighbouring country 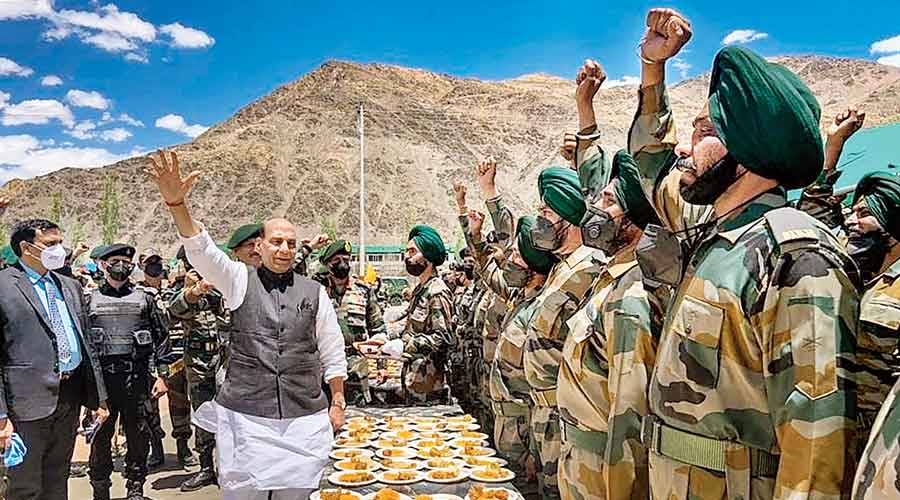 Defence minister Rajnath Singh interacts with soldiers during his visit to Karu, Ladakh, on Monday
PTI
Our Special Correspondent   |   New Delhi   |   Published 29.06.21, 12:58 AM

Defence minister Rajnath Singh on Monday said the Indian Army had the capability to give a befitting reply to every challenge, and efforts should be made to find a solution to resolve disputes through dialogue with neighbouring countries.

Rajnath, however, desisted from naming China, a policy Prime Minister Narendra Modi has been following through the 13-month border standoff with that country.

India and China have been locked in border disputes at multiple friction points in eastern Ladakh since May last year. China’s People’s Liberation Army has altered the unmarked Line of Actual Control (LAC) at these friction points and is estimated to have taken over close to 1,000sqkm of India-claimed territory.

Even a year after the Galwan clash, in which 20 Indian soldiers were killed, there are no signs of restoration of status quo ante along the LAC.

Sources say China has so far shown no intent of pulling back either from Hot Springs/Gogra or from the Depsang Plains where its troops are said to have transgressed 18km into the India-claimed territory.

Interacting with the troops of Indian Army’s 14 Corps in Ladakh on Monday, Singh said: “India is a peace-loving nation that never resorts to any kind of aggression, but at the same time, it is always prepared to give a befitting reply if provoked.”

A press statement from the defence ministry said: “He (Singh) reiterated the government’s stand of resolving disputes through dialogue with neighbouring countries, but assured the nation that safety and security of the nation will not be compromised at any cost.”

The defence minister, who arrived in Ladakh on Sunday on a three-day visit, also inaugurated 63 bridges constructed by the Border Roads Organisation (BRO) in six states and two Union Territories.

Lauding the army for displaying exemplary courage during the Galwan Valley face-off, the defence minister paid tributes to the bravehearts who laid down their lives in the line of duty.

In the wake of the PLA’s massive deployment along the LAC in Ladakh, the Indian Army has put in place mirror deployment and established habitat facilities for 50,000 additional troops deployed there, backed by battle tanks, missile systems and frequent sorties by the Indian Air Force’s combat aircraft.