Despite expressing support for democratic reforms in Myanmar since the coup last year, India's actions appear to appease the military junta, say experts 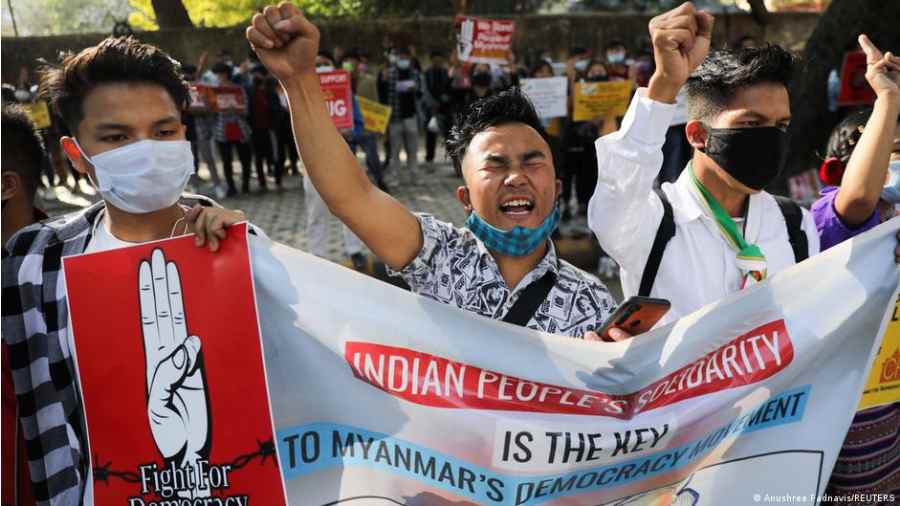 Citizens of Myanmar living in India have staged several demonstrations against the military junta in their country
Deutsche Welle
Murali Krishnan   |   Published 02.08.22, 09:55 PM

Despite expressing support for democratic reforms in Myanmar since the coup last year, India's actions appear to appease the military junta, say experts.

India expressed "deep concern" following the executions of four political prisoners in Myanmar last week, joining other nations in condemning the hangings and raising concerns over the deteriorating human rights situation in the country.

Civil unrest continues to rage in Myanmar even as the military engages in a brutal crackdown to quash protests against last year's coup.

A day after the executions, India's envoy Vinay Kumar met with Foreign Minister U Wunna Maung Lwin in Naypyitaw, where they exchanged views on bilateral relations and possibilities for collaboration.

Since the coup, India has been cautious about its diplomatic relationship, condemning the violence but not reaffirming the legitimacy of the 2020 election result, when Aung San Suu Kyi's National League for Democracy (NLD) party secured enough seats in parliament to form the government.

"India very much remains a steadfast friend of the Myanmar junta and has been assiduously cultivating the military, particularly the military chief Min Aung Hlaing, for years," Khin Zaw Win, director of the Yangon-based Tampadipa Institute, told DW.

"This has become worrying after the coup of February 2021, since India has seen fit to continue with the relationship. What India sees as an asset has become a big liability," he added.

In fact, following the executions of the four pro-democracy activists, authorities in New Delhi canceled a planned protest over the weekend by Myanmarese dissidents seeking refuge in India.

"A peaceful protest by around 200 individuals at the iconic protest venue, Jantar Mantar, to express our condemnation of the barbaric act was turned down at the last minute," a protester told DW.

Campaign for a stronger Indian position against Myanmar

Many refugees living in exile in India have tried to continue efforts to raise awareness of human rights violations and urge the Indian government to take a more robust position against the Myanmar government.

Over 20,000 Chin refugees have already crossed into the border districts of the northeastern state of Mizoram. They live in refugee camps spread across southern districts of the state along the Myanmar border.

The entire task of hosting refugees is being handled by village communities organized by powerful institutions like the Young Mizo Association and the Mizo Baptist Church, which considers the Chins to be their ethnic brethren.

A bridge between south Asia and southeast Asia, Myanmar has loomed large on India's diplomatic horizon and its importance is all too obvious.

Both countries share a long land border of over 1,600 kilometers (994 miles) and a maritime boundary in the Bay of Bengal. Myanmar is also critical to India's national security. The two countries have sealed a pact to share real time intelligence to combat Indian insurgents operating from the border region.

According to foreign policy analysts, India's approach to the situation in Myanmar needs to be understood through the lens of competition with China.

"It looks as if India is trying to stay neutral in the current political context of Myanmar but it is not the correct decision," Isaac Khen of the Prime Minister's Office of the National Unity Government (NUG) told DW.

The NUG is the shadow government that was formed to oppose the military in mid-April 2021, comprising a group of elected lawmakers and members of parliament.

"It is observed that India's Myanmar policy is directly related to the policy of China in Myanmar and it is still weak to support pro-democracy actors in Myanmar," added Khen.

China has announced that it would back the Myanmar regime no matter how the situation changes, indicating Beijing's desire to deepen exchanges and cooperation with Naypyitaw, which is of concern to India.

Myanmar also falls under China's Belt and Road Initiative with a $100 billion (€97.7 billion) economic corridor connecting the Chinese province of Yunnan with oil and gas fields in Rakhine state.

'A varied relationship' to Myanmar

Some say India is walking a tightrope of engaging the Myanmar military to pursue its geostrategic objectives.

"India has a varied relationship. On the one hand, it condemned the executions and last year industrialist Gautam Adani withdrew from a project building a new port in Yangon in partnership with the Myanmar military," Chris Sidoti, of the Special Advisory Council for Myanmar (SAC-M), told DW.

The SAC-M is an independent group of international experts working to support the struggle for human rights and justice in Myanmar.

"On the other, there are close economic, trade and political relationships. India's best interests lie in a stable, peaceful and mutually prosperous relationship," he added.

Apart from India and China, Japan also has made overtures to the military junta. And Cambodia, which took over as the chair of the Association of Southeast Asian Nations (ASEAN), has also increased its interaction with the regime.

However, India also understands that its support for the Myanmar military could snowball and lead to a major refugee crisis in India, similar to the flight of the Rohingyas in 2017.

Observers believe that the military junta is not going away in a hurry.

Sidoti believes the best way for India to have a good relationship with Myanmar is if it supports the democracy movement and NUG.

"This will place as much political and economic pressure on the military as possible to go back to the barracks and leave the government of the country to the NUG," said Sidoti.