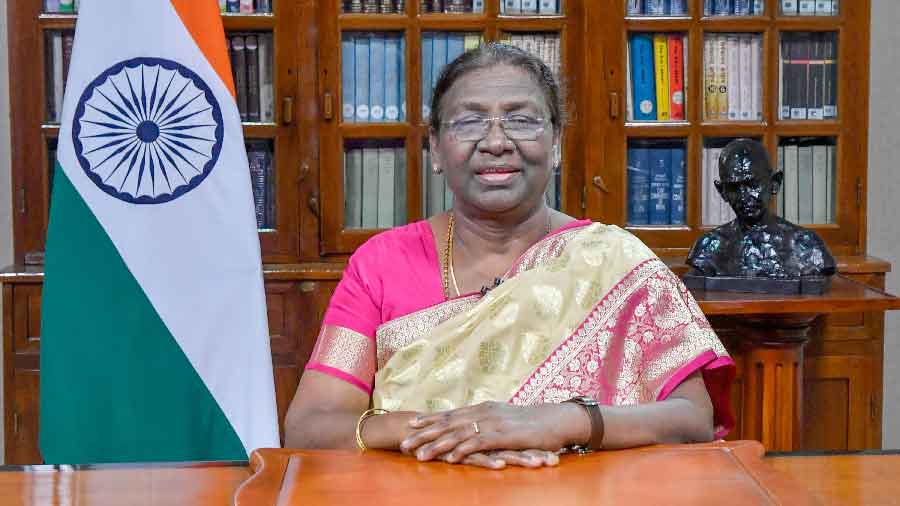 G20 is an ideal platform to discuss and find solutions to "most pressing" problems such as global warming and climate change which affect the poor most, President Droupadi Murmu said in her maiden address to the nation on the eve of Republic Day.

The President said after a series of initiatives in recent years to transform all aspects of governance and unleash the creative energies of people, the world has started to look at India with a new sense of respect.

"Our interventions in various world forums have started making a positive difference. The respect that India has earned on the world stage has resulted in new opportunities as well as responsibilities," she said.

President Murmu said India holds the Group of 20 (G20) presidency this year, which is an opportunity to promote democracy and multilateralism and the right forum for shaping a better world and a better future.

"Under India's leadership, I am sure, G20 will be able to further enhance its efforts to build a more equitable and sustainable world order," she said.

The President said G20 represents about two-thirds of the world population and around 85 per cent of the global GDP, and it is an ideal forum to discuss and find solutions for global challenges.

"To my mind, global warming and climate change are the most pressing among them. Global temperatures are rising and incidents of extreme weather are increasing... Unfortunately, the poor bear the brunt of global warming more than others," she said.

The President said that India is faced with the dilemma of lifting more and more people out of poverty which is possible through economic growth but that also comes from fossil fuels.

She said one of the solutions to the conundrum is promoting the use of alternative energy sources.

"India has taken a commendable lead in this direction by giving a policy push to solar energy and electric vehicles. At the global level, however, emerging economies need a helping hand from advanced nations in the form of technology transfer and financial support," Murmu said.

Murmu, the first President from the tribal community, said to balance development and the environment, we have to look at the ancient traditions with a new perspective.

"We need to reconsider our basic priorities. The scientific aspects of traditional life-values have to be understood. We must, once again, rekindle that respect for nature and humility before the vast universe," she said.

The President said Mahatma Gandhi was a true prophet of our times, as he foresaw the calamities of indiscriminate industrialisation and cautioned the world to mend its ways.

In her maiden Republic Day eve address to the nation, Murmu said the policy has introduced ambitious changes.

"With the economy on a sound footing, we have been able to begin and carry forward a series of praiseworthy initiatives. The ultimate goal is to create an environment in which all citizens can, individually and collectively, realise their true potential and prosper. As education builds the right foundation for this purpose, the National Education Policy has introduced ambitious changes," she said.

"It rightly addresses the two-fold aims of education: as an instrument of economic and social empowerment and as a means to explore truth. The policy makes our civilisational lessons relevant for contemporary life, while also preparing the learner for the 21st century challenges. The National Education Policy appreciates the role of technology in expanding and deepening the learning process," she added.

The NEP approved by the government in August, 2020, replaced the 34-year-old National Policy on Education framed in 1986 and is aimed at paving the way for transformational reforms in school and higher education systems to make India a global knowledge superpower.

Teaching up to Class 5 in mother tongue or regional language, lowering the stakes of board exams, a single regulator for higher education institutions (except for law and medical colleges), and common entrance tests for universities are part of the sweeping reforms in the new NEP.

Replacing the 10+2 structure of school curricula with a 5+3+3+4 curricular structure corresponding to age groups 3-8, 8-11, 11-14 and 14-18 years, respectively, scrapping MPhil programmes and implementing common norms for private and public higher educational institutions are among other salient features of the new policy.

Most sectors of Indian economy have shaken off pandemic effects

Most sectors of the Indian economy have shaken off effects of COVID-19 which has hurt it badly in the initial phase, Droupadi Murmu said.

"With the outbreak of the pandemic, the world has changed within a matter of days. During these three years, whenever we have felt that we have finally put the virus behind, it raises its ugly head," she said.

Asking people to not let the guard down and remain alert, the President said "there is no need to panic" because the country has learnt in this period that "our leadership, our scientists and doctors, our administrators and corona warriors" will make every possible effort to meet any situation.

Speaking on the economic front, the President said last year, India became the fifth largest economy in the world.

She underlined that this achievement comes against the backdrop of high economic uncertainties around the world.

"The pandemic has entered the fourth year, affecting economic growth in most parts of the world. In its initial phase, COVID-19 also hurt India's economy badly. Yet, guided by our able leadership and driven by our resilience, we soon came out of the downturn, and resumed the growth saga," she said.

The President said most sectors of the economy have shaken off the pandemic effect and the nation has been among the fastest-growing major economies.

"This has been made possible by timely and proactive interventions from the government. The 'Atmanirbhar Bharat' initiative, in particular, has evoked great response among people at large. There have also been sector specific incentive schemes," she said.

The President said those on the margins have also been included in the schemes and programmes and they have been helped in tiding over difficulties.

"By implementing the 'Pradhan Mantri Garib Kalyan Anna Yojana' announced in March 2020, the government ensured food security for poor families at a time when the country was facing economic disruption in the wake of the unprecedented outbreak of COVID-19. Because of this help, no one had to go hungry," she said.

President Murmu said 81 crore fellow citizens get their monthly ration free of cost under the scheme which has been extended for the year 2023.

"With this historic move, the government has undertaken the responsibility of caring for the weaker sections while also enabling them to benefit from economic development," she said.

"The Digital India Mission is striving to make information and communication technology inclusive by bridging the rural-urban divide. More and more people in far-flung places have been reaping the benefits of internet and are receiving a variety of services provided by the government, as the infrastructure expands," she said.

The President lauded recent space exploration programmes such as Gaganyaan and Mars mission.

"India has been among the handful of pioneers in space technology. As long pending reforms in this sector are underway, private enterprises are now invited to join the quest," she said.

Cheering the role of women scientists in the Mars mission, Murmu said women's empowerment and gender equality are no longer mere slogans, as "we have made great progress towards these ideals" in recent years.

"With people's participation in the 'Beti Bachao, Beti Padhao' campaign, women's representation has been rising in every sphere of activity. During my visits to various states, educational institutions and while meeting delegations of various professionals, I am amazed by the confidence of young women. I have no doubt in my mind that they are the ones who will do most to shape tomorrow's India," she said.

The President said the same vision of empowerment guides the government's approach to the marginalised communities including the Scheduled Castes and Scheduled Tribes.

"In fact, the aim is not only to remove hurdles and help them in development, but also to learn from them. Tribal communities, in particular, have rich lessons to offer in many areas, ranging from protecting the environment to making the society more cohesive," she said.