Help coincides with the visit of President Ibrahim Ahmed Solih 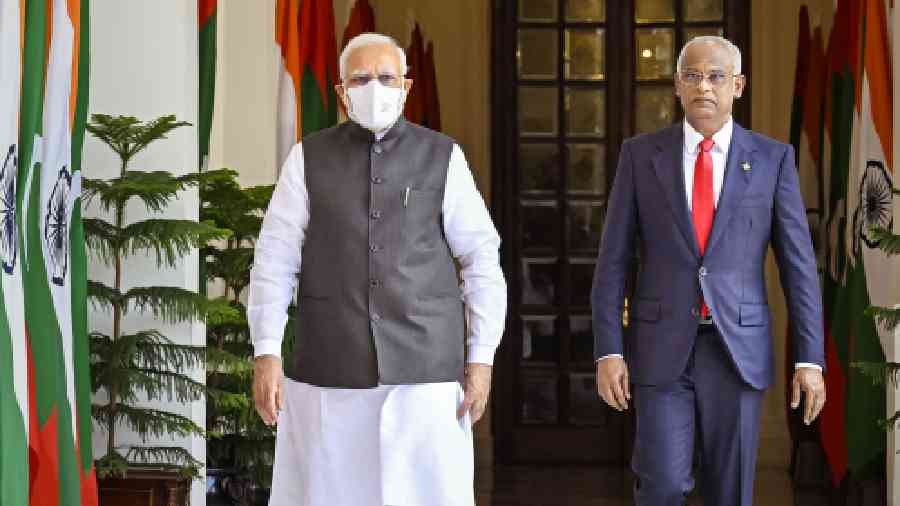 India on Tuesday announced a new line of credit of $100 million for Maldives during the visit of President Ibrahim Ahmed Solih, who is here in the midst of a bitter political tussle with party colleague and Speaker of the People’s Majlis Mohammed Nasheed that could benefit China-leaning Opposition candidate Abdulla Yameen in the presidential elections next year.

Though the infighting at the top in the Maldivian Democratic Party (MDP) is a cause for concern for New Delhi, the external affairs ministry sidestepped questions on whether this issue came up during the bilateral discussions with Solih and his team.

Asked if there was any discussion on the infighting in the MDP, the anti-India slogans in Maldives and the growing sentiment against yoga, India’s High Commissioner to the Maldives, Munu Mahawar, said: “The discussions focused on bilateral, regional and international issues. President Solih has reaffirmed ‘India First’ policy of Maldives… President Solih has also assured that there is a strong desire in Maldives to strengthen the relationship with India.

“The people of Maldives appreciate this partnership, they recognise how India has always stood by Maldives in their hours of need, and there is a genuine desire to further strengthen our relationship. These campaigns, which are being run, are based on mis-information, false propaganda and they do not reflect the views of the people of Maldives.”

He was referring to the ‘India Out’ campaign that the Maldivian Opposition has been running for months, alleging that the Solih administration has sold out to India, but refused to be drawn into commenting on the running battle between friends-turned-foes Solih and Nasheed. Things have soured between the two, particularly in recent days, after Nasheed’s brother Ahmed Nazim was arrested on charges of homosexuality following which the Speaker has accused the President of having an extra-marital affair.

On the campaign against yoga — which resulted in the official International Yoga Day function in Male being attacked this year — Mahawar said: “In Maldives, International Day of the Yoga has been celebrated every year since 2015. And Maldives had co-sponsored the resolution that recognised this day.” One of the constituents of the ruling coalition, the Adhaalath Party, is also opposed to yoga, and an earlier grouse of Nasheed with Solih was that he had succumbed to such forces in his government.

Earlier, in his statement to the media after his meeting with Solih where they witnessed virtually the pouring of the first concrete for the Greater Male Connectivity Project, Prime Minister Narendra Modi said: “India has been and will continue to be the first responder in any need or crisis of Maldives.”

Apart from announcing the additional line of credit, he said India would provide financial support for 2,000 social housing units in addition to the 4,000 already being funded by India in Greater Male. The Prime Minister also announced the supply of the second Landing Assault Craft and a replacement ship for earlier provided CGS Huravee for the Maldives National Defence Force along with a gift of 24 utility vehicles.