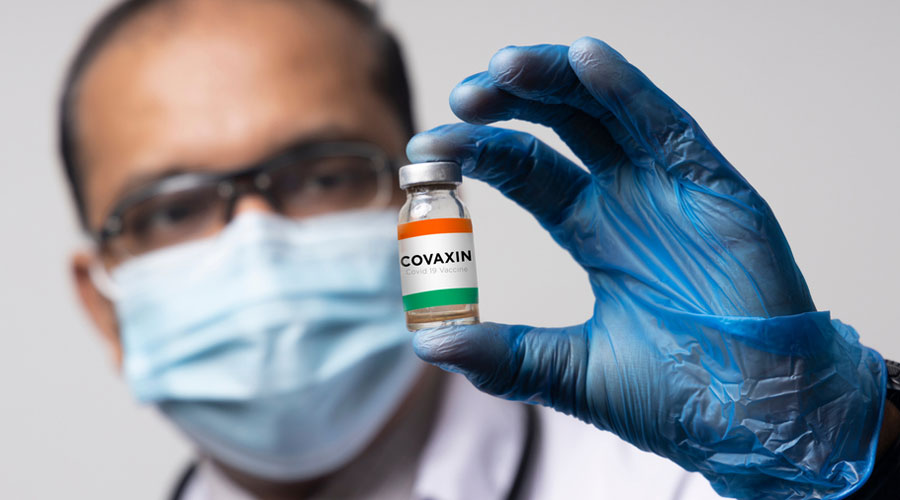 Bharat Biotech’s Covaxin has shown encouraging immune responses in volunteers, but the vaccine is yet to be proven effective in actually preventing the infection.
Shutterstock
G.S. Mudur   |   New Delhi   |   Published 03.01.21, 02:32 AM

India’s drug regulatory expert panel on Saturday recommended conditional and restricted emergency use of a home-grown vaccine against the coronavirus disease without direct evidence for its protective efficacy.

Earlier on Friday, the AstraZeneca-Oxford vaccine had been recommended. The recommendations from the Subject Expert Committee (SEC) to the Central Drugs Standard Control Organisation, the apex regulatory authority for drugs and vaccines, imply India could use two vaccines for its planned campaign to initially vaccinate around 300 million people.

The Union health ministry said on Saturday the SEC had granted the permissions under multiple conditions, but some medical experts said the committee appeared to have yielded to a desire to launch an Indian-made vaccine alongside a foreign one.

The AstraZeneca-Oxford vaccine, manufactured in India by the Pune-based Serum Institute of India, is named Covishield, while the home-grown vaccine developed by the Hyderabad-based Bharat Biotech jointly with the Indian Council of Medical Research (ICMR) is called Covaxin.

The SEC’s recommendation of Covishield relied on efficacy data generated through foreign clinical trials. The vaccine has shown 62 per cent protective efficacy in a two-dose regimen in trials in the UK and Brazil.

A trial to evaluate Covaxin’s efficacy started in mid-November and has recruited over 23,000 volunteers in 12 cities. But efficacy assessment would need Covid-19 infections to emerge in vaccinated and unvaccinated groups, allowing measurements of efficacy through differences in the numbers of infections between the two groups.

The permission to Covishield is subject to “multiple regulatory conditionalities”, and the permission to Covaxin is “in public interest as an abundant precaution, in clinical trial mode, specially in the context of infection by mutant strains”, the health ministry said.

The health ministry did not clarify what the SEC meant by “clinical trial mode”, but experts familiar with clinical trials said the restricted emergency use would require the vaccines’ performance to be monitored after their launch.

“Restricted emergency use means both the vaccines would need to be rigorously evaluated for safety and efficacy even after they have been rolled out,” Santanu Tripathi, the former head of clinical pharmacology at the Calcutta School of Tropical Medicine, told The Telegraph.

Senior clinical researchers, including a member of a national task force on Covid-19 who is familiar with Covaxin, said multiple factors weighed in favour of the decision to grant permission for the vaccine’s restricted emergency use in the current circumstances.

A senior researcher at the ICMR, the country’s apex health research agency that collaborated with Bharat Biotech in developing Covaxin, said the emergency-use authorisation represented a process to “accelerate” development in response to an epidemic that was killing people every day.

“The pandemic has given rise to extraordinary circumstances that require extraordinary responses,” Samiran Panda, head of the ICMR’s epidemiology division, said.

Another researcher said Covaxin “generates antibodies against multiple coronavirus proteins, produces high levels of antibodies that promise an immune response of six to 12 months, and stimulates the arm of the immune memory system”.

“Covaxin is made from the inactivated (killed) whole virus that has this theoretical advantage of being able to successfully trigger immune responses against emerging mutant variations of the coronavirus,” the task force member said.

But several others, including the national task force member, said the standard scientific process would have required waiting for at least the interim results from the ongoing efficacy trial. “They could have waited for interim efficacy results,” the member said.

“I don’t know what data the SEC reviewed, but I don’t think there is sufficient clinical evidence to permit even restricted approval,” another clinical researcher said.

The SEC’s decisions, taken over Friday and Saturday, have stirred speculation in some scientific circles whether they were influenced by a political desire to have a home-grown vaccine alongside the UK vaccine.

Health officials have indicated the vaccination campaign could start within days of the grant of approval.