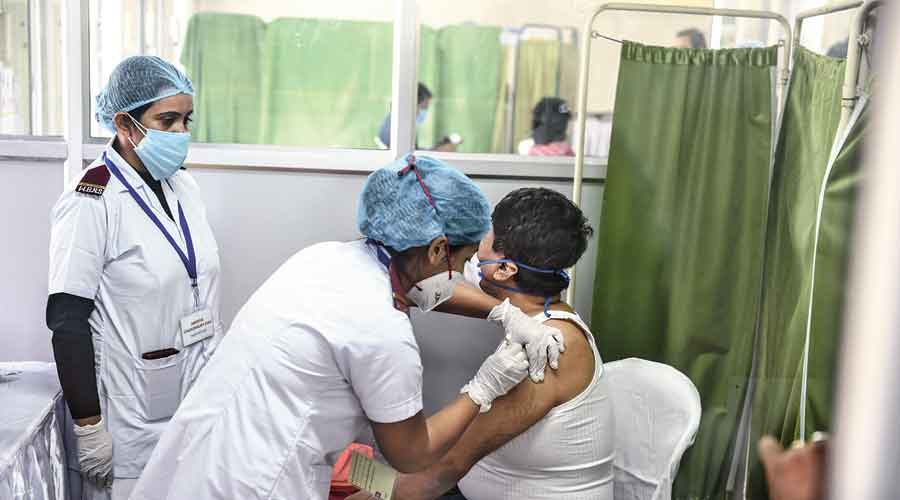 A senior advisor to the government’s vaccination drive said India has the capacity and the experience largely through childhood immunisation programmes to dramatically scale up the campaign to more than 50,000 vaccination centres from an estimated 20,000 active at present.
PTI
G.S. Mudur   |   New Delhi   |   Published 10.03.21, 01:53 AM

India hopes to double its Covid-19 vaccination centres to over 50,000 within weeks and complete inoculation of the estimated 300 million people from priority population groups by September, but this plan will hinge on synchronised public acceptance and vaccine supply, experts said.

A senior adviser to the government’s vaccination drive said India has the capacity and the experience largely through childhood immunisation programmes to dramatically scale up the campaign to more than 50,000 vaccination centres from an estimated 20,000 active at present.

Experts believe India would need to quickly scale up the campaign to overcome its sluggish start that they say is due to both, the vaccine hesitancy among sections of recipients and a cautionary “start-slow” approach by the government.

The Union health ministry said more than 24 million vaccine doses had been given till 7pm on Tuesday since the campaign’s start on January 16.

“There is no shortage of vaccines, but we have to synchronise the process of adding immunisation centres with public acceptance of the vaccines,” said Narendra Arora, a member a Covid-19 expert group set up by the Indian Council of Medical Research who is advising the government on the vaccination campaign. “Otherwise, there may be vaccine wastage,” he said.

Arora said the campaign could be expanded to over 50,000 centres by April. Under the health ministry’s operational guidelines, each immunisation centre is expected to typically offer 100 vaccinations per day.

“We have the capacity to increase to five million per day — but we’re doing an adult mass immunisation programme for the first time. We want to go slow and learn as we move along,” Arora said, adding that India has significant experience in conducting large-scale childhood immunisation programmes.

Till Monday evening, over 7 million of an estimated 10 million healthcare workers and 6.7 million of an estimated 20 million frontline workers had received their first doses of the vaccine, while 3.7 million healthcare workers and 3.1 million frontline workers have received both vaccine doses. Two doses are required for protection. “There will be a need for close monitoring for compliance with the second dose,” said Oommen John, a physician and senior research fellow at The George Institute for Global Health, New Delhi.  “The trend so far suggests compliance to the second dose has been somewhat suboptimal. The health system is dependent on self-initiated demand for vaccines. People need to come forward,” he said.