Dialogue to work out 'balanced, ambitious and mutually beneficial' agreements 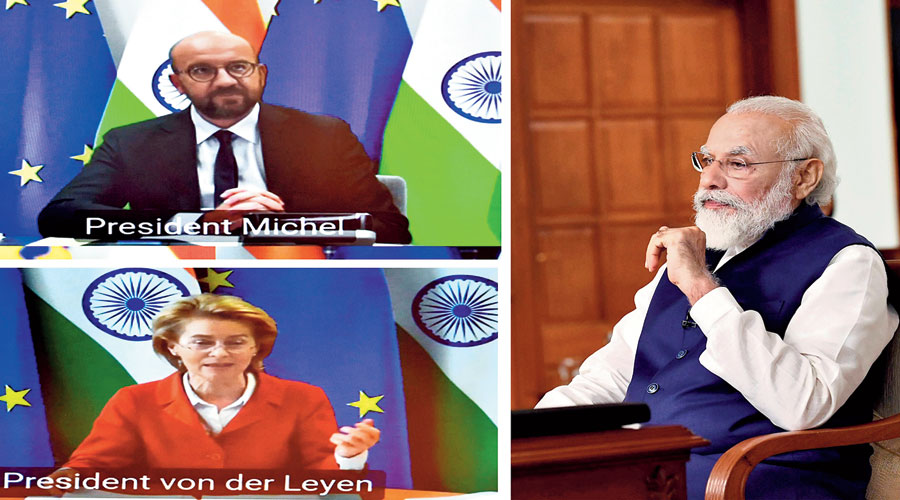 India and the European Union on Wednesday decided to begin a high-level dialogue to work out “balanced, ambitious and mutually beneficial trade and investment agreements”, signalling a renewed effort to work out a trade agreement that had been suspended in 2013 after six years of negotiations.

The decision was taken at the India-EU virtual summit where the two sides took into account the fact that baby steps had been taken by India’s commerce minister and the EU’s trade commissioner since the election of a new president of the European Commission in December to make a fresh effort at a Broad-Based Trade and Investment Agreement.

“The high-level dialogue will aim at fostering progress on the trade and investment agreements, addressing trade irritants and improving conditions for traders and investors on both sides as well as discuss supply chain linkages,” the joint statement issued at the end of the summit said.

On Tuesday, EU officials had expressed concerns about India’s protectionist streak of raising tariffs and calls for self-reliance while ruling out the possibility of the EU accepting commerce minister Piyush Goyal’s suggestion for an “early harvest deal”. They said the EU was more interested in a deal that had broad coverage.

Given the current shift in the global order, both sides envisaged a greater role for the EU at a time the US is retreating from various multilateral fora. Both the sides affirmed their commitment to promoting effective multilateralism in the face of growing unilateralism by the US and a rule-based multilateral order pivoted around the United Nations and the World Trade Organisation.

China came up during the discussions, but all that European Council president Charles Michel was ready to divulge was that the Prime Minister apprised him and European Commission president Ursula von der Leyen of the situation along the Line of Actual Control. The EU, Michel said, was keen to see the two countries resolve the issue peacefully.

To a direct question on which country is of greater strategic importance to the EU — China or India — the EU leadership said, “Both are important to us and both are very different”; the main difference being political in that India is a democracy with which the EU shares the principles of liberty and freedom. Though the EU has a difficult relationship with China, it is not yet ready to side with the US in its muscle flexing with Beijing.

Michel said the issue of the Citizenship Amendment Act (CAA) did come up during the discussions and “we trust the Indian institutions’ ability to deal with them; we understand the Supreme Court is looking into it”.

In January, the majority of the members of the European parliament had moved a resolution on the CAA’s discriminatory nature and how it violated the Indian Constitution and universal values, but deferred a vote till after this summit, which was earlier scheduled to be held in March.