India, EU to launch trade and technology council to deal with new challenges 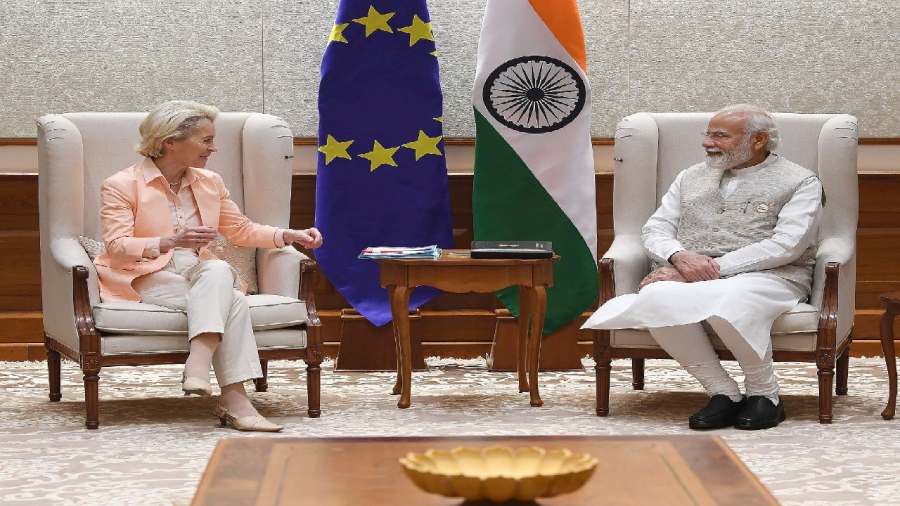 It will be the second trade and technology council involving the 27-nation European Union (EU) after its first one with the United States.

The decision to launch the new platform was taken during talks between Modi and von der Leyen. The two leaders deliberated on a plethora of key issues, including the situation in war-hit Ukraine.

In a tweet, Modi said he was delighted to hold talks with the European leader and that both sides reviewed the "full range of India-EU ties including economic and cultural linkages".

Delighted to hold talks with President of @EU_Commission @vonderleyen earlier today. We reviewed the full range of India-EU ties including economic and cultural linkages. pic.twitter.com/Vc5jv1Lrqa

"Today, our relationship is more important than ever. We have so much in common. We are vibrant democracies, we both support wholeheartedly the rules-based international order and we have both large economies, and we are both facing a challenging global landscape," von der Leyen said in her opening remarks at the meeting with Modi.

"For the European Union, the partnership with India is one of our most important relationships for the coming decade and strengthening this partnership is a priority," she added.

The European Commission president said she was glad that both sides are starting negotiations toward comprehensive trade and investment agreements.

The European Union said the EU-India Trade and Technology Council will allow both partners to tackle challenges "at the nexus of trade, trusted technology and security, and thus deepen cooperation in these fields".

It said both sides agreed that the rapid changes in the geopolitical environment highlight the need for joint in-depth strategic engagement.

"The Trade and Technology Council will provide the political steer and the necessary structure to operationalise political decisions, coordinate technical work and report to the political level to ensure implementation and follow-up in areas that are important for the sustainable progress of European and Indian economies," the EU said in a statement.

It said the shared values and common interests of the EU and India offer a strong basis to intensify mutually beneficial and deeper strategic cooperation.

"The European Union and India are bound by decades of close partnership and are determined to increase joint efforts to tackle current challenges and address geopolitical circumstances," it said.

"The decision to set up a Trade and Technology Council will be the first for India with any of its partners and second for the European Union following the first one it has set up with the US," the EU added.

It said establishing the EU-India council is a key step toward a strengthened strategic partnership for the benefit of all peoples in the EU and India.

The European Commission president began a two-day visit to India on Sunday in the backdrop of the Russia-Ukraine conflict.

"I am thinking of three main topics -- trade, technology and security. That is why I am pleased that today, Prime Minister Modi and I have agreed to establish an EU-India Trade and Technology Council," von der Leyen said during her meeting with Modi.

"The EU has only one TTC so far -- with the US, and I think it is telling that we now establish the second one with India. Also because India is technologically a powerhouse and in the trade sector, we need to unleash an enormous amount of untapped potential," she said.

The European Commission president said the EU will "diversify away" from fossil fuels and invest heavily in clean renewable energy. "Therefore, cooperation with India not only on solar but also on green hydrogen is critical," she added.

At an event on Sunday, von der Leyen said Russia's war in Ukraine was a stark reminder that the dependency on Russian fossil fuels is not sustainable and pitched for a deeper cooperation between India and the EU to expand the use of clean energy.

In her address at the International Solar Alliance (ISA), she also talked about the need for sustainable ways of doing business using clean energy and emphasised the need for switching to "home-grown clean energies" in the wake of the Russian aggression against Ukraine.

"Pleased to call on President of @EU_Commission @vonderleyen. Discussed taking forward the #IndiaEU partnership. Also exchanged views on the economic and political implications of the Ukraine conflict," Jaishankar tweeted.

Pleased to call on President of @EU_Commission @vonderleyen.

Discussed taking forward the #IndiaEU partnership. Also exchanged views on the economic and political implications of the Ukraine conflict. pic.twitter.com/tjN9CMnB5K