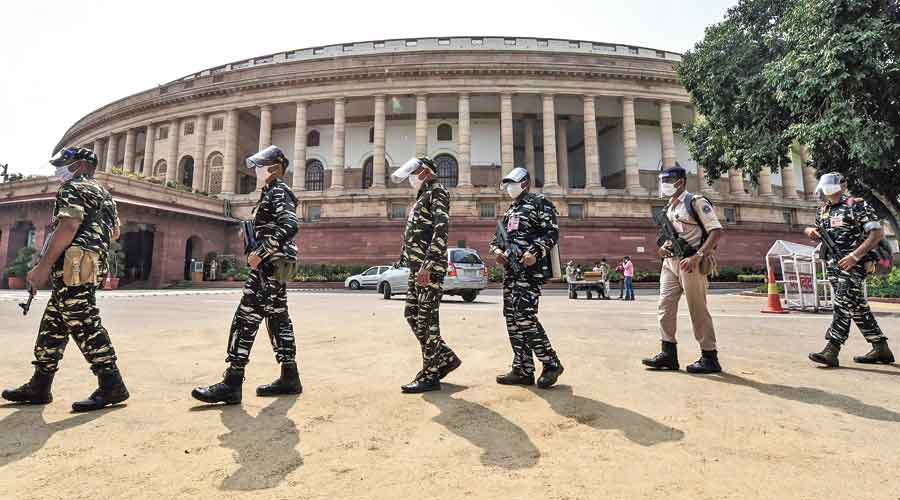 The Congress on Sunday made it clear that Prime Minister Narendra Modi would have to explain why he made the “no-intrusion” remark that weakened India’s position vis-a-vis China, setting the stage for a stormy Parliament session from Monday as the government may not concede more than a statement on the border situation.

While the Opposition is primarily going to target the government on three vital concerns — China, the economy and the mismanagement of the coronavirus pandemic — a host of other issues such as the farm sector reforms ordinances, banking regulations, the planned privatisation of airports and sale of PSUs, unemployment, the PM CARES Fund, the plan to go ahead with the Central Vista beautification and construction project in the capital despite extreme austerity measures, and the conspiracy to frame critics of the government and anti-CAA protesters in Delhi riots cases have also been lined up for the 18-day session.

The government may not want to give enough time to the Opposition to raise so many issues during a session that has been curtailed to four-hour sittings daily due to Covid protocol, and the plan to pass 11 ordinances. The sensitive China issue, however, has the potential to unsettle the entire schedule. A conflict is inevitable as the Prime Minister is unlikely to explain what exactly he meant when he claimed at an all-party meeting on June 19 that none had forcibly entered Indian territory or taken over posts.

Congress spokesperson and the party chief whip in the Rajya Sabha, Jairam Ramesh, said on Sunday: “It is the Prime Minister’s statement that weakened India’s position. That was not only contrary to the facts on the ground, but China has also been using it to contest our claims. The Prime Minister does not like to answer questions but these are extraordinary circumstances. We hope he is present in the Lok Sabha and the Rajya Sabha to answer questions.”

Asked about the government’s usual reluctance to discuss China citing national security concerns, as had happened during the 2017 Doklam standoff as well, Ramesh said: “In November 1962, when India and China were at war, Parliament had met. Parliament had met from November 11, 1962. During the second phase of the Chinese invasion of India, too, Parliament was in session. The Prime Minister (Jawaharlal Nehru) sat in the Lok Sabha, listening to criticism of his own policies from senior parliamentarians including Atal Bihari Vajpayee. It is ridiculous to say that there should not be any discussion on China, we need a discussion on China.”

Ramesh added: “We are responsible political parties; we know what to say and what not to say. The greatest damage to our cause has been done by the Prime Minister’s own statement. He owes an explanation, why did he make that statement, which has single-handedly weakened India’s case and status quo ante on the LAC has not been restored. This is not a debating point, this is a very serious national issue. Parliament is a place for debate, not for running away.”

Iterating that the farm sector ordinances would be opposed with all force, Ramesh said the Congress was in touch with other parties and that most non-BJP states felt the new regime would destroy the farmers and facilitate a corporate takeover.

The Congress spokesperson said the Opposition didn’t have the numbers in the Lok Sabha but a stiff resistance would be put up in the Rajya Sabha, adding that veteran leaders Ghulam Nabi Azad, Anand Sharma and Ahmed Patel were in touch with like-minded parties to evolve a common strategy.

Ramesh declared strong opposition to the Banking Regulation Ordinance as well. Listing objections, he said: “Cooperative banks are part of the structure of cooperatives and ought to be regulated by the state governments, not by the central government. If the ordinance becomes law, all key financial intermediaries will come under the control of the central government, there will be more centralisation.

Ramesh alleged that powers were being taken away to change the financial structure of cooperative banks, “enabling the vesting of control in the hands of strangers and predators”.

Rahul to Modi government: get land back from China