Every Bihari is proud: Modi 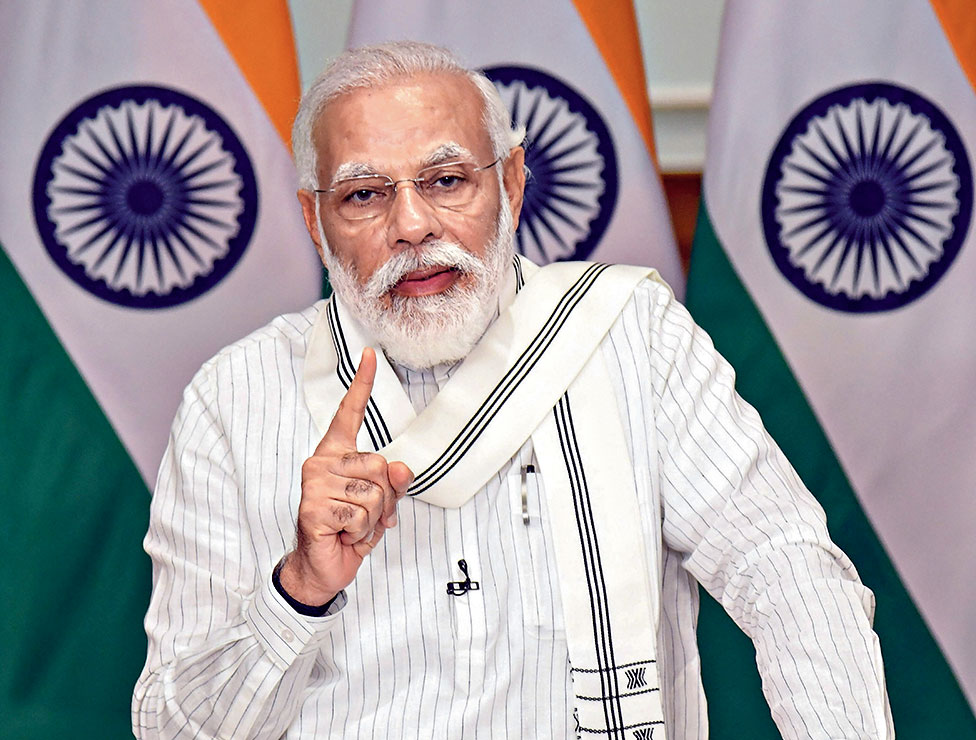 Prime Minister Narendra Modi on Saturday said while launching a job scheme for the poor that “when I’m speaking to the people of Bihar, I will say the valour was of Bihar Regiment — every Bihari is proud of it”.

The Prime Minister was referring to the flare-up in the Galwan Valley in which 20 Indian soldiers were killed.

“The country is proud of the sacrifice made by our brave soldiers in Ladakh. Today, when I’m speaking to the people of Bihar, I will say the valour was of Bihar Regiment — every Bihari is proud of it. I pay tribute to the brave soldiers who laid down their lives for the nation,” Modi said while launching the Garib Kalyan Rojgar Abhiyan.

The reference to Bihari pride raised the eyebrows of many a military veteran, especially since the Indian Army is a symbol of national integration and the regional label of a regiment does not bar citizens from across the country from playing a role in it.

Several retired officers also recalled that Modi had “politicised” the Pulwama terror attack and Balakot air strikes to garner votes in last year’s general election. They wondered whether he was now trying to milk the sombre occasion ahead of the Bihar Assembly polls due this year.

Of the 20 soldiers killed in Monday’s face-off with the Chinese, 13 were from the 16 Bihar Regiment but only five were from Bihar — reflecting the army policy of having mixed ethnicities even in regiments named after regions, which are a colonial legacy. Altogether, the 20 were from 11 states, belonging to multiple units.

The slain commanding officer of the Bihar Regiment unit in the Galwan Valley, Colonel Santosh Babu, was not from Bihar but from Telangana.

However, Modi, addressing specifically the people of Bihar, spoke only of Bihari pride. This in a country where Sam Manekshaw was reassigned to the 8th Gorkha Rifles after India won Independence although he was a Parsi. The first Indian field marshal was known as “Sam Bahadur” among the troops he commanded.

CPM leader Sitaram Yechury tweeted lines from Ae mere watan ke logon — chiselled into the collective national psyche by Lata Mangeshkar in 1963 after the China war — that eulogised the national character of the Indian Army.

A veteran, Colonel (retd) Ashok Kumar Singh, told The Telegraph he was “shocked”.

“Here’s a Prime Minister using the symbol of national integration (the army) to appeal to regional sentiments to win votes, that too while the slain soldiers’ families are still performing their last rites,” he said.

“It’s shameful that Modiji is again politicising the sacrifice of soldiers to win the Bihar election, just like he had politicised the Pulwama attack and Balakot strikes and benefited immensely in the Lok Sobha elections last year.”

Other than the five soldiers from Bihar, the dead included four from Punjab, two each from Bengal and Jharkhand and one each from Odisha, Uttar Pradesh, Telangana, Tamil Nadu, Chhattisgarh, Himachal Pradesh and Madhya Pradesh.

“Why is the Prime Minister dividing the army on regional lines simply because he faces an election in Bihar?” a retired lieutenant general who wished not to be quoted said.

“The 20 slain soldiers are from across the country and belong to India. Instead of playing games by catering to regimental sentiments, Modi needs to explain why he is misleading the country by saying there’s been no incursion. Why did our soldiers get killed, then?”

Another veteran said: “Playing politics over the regiment not only sullies the image of the uniform but also the soldier’s sacrifice.”

A retired army officer said the army ensured a healthy mix of ethnicities in every regiment while retaining their British-era names to provide a sense of history and continuity, highlighting their origin and fostering pride in their past accomplishments.

He said these regiments exemplify how Indians can work together for the good of the country without having to abandon their religious or ethnic identities.

“It’s a brotherhood in which Hindus, Muslims, Sikhs and Christians try to excel in their service for the good name of their regiment, the army and the country,” he said.

A regiment with a regional name usually has a large number of jawans from the region. But several such regiments have officers from other regions — as was the case with Col Babu.

“There is no rule barring people from other states being recruited as soldiers in the Bihar regiment or any other regiments,” an officer said.

Recruitments based on caste and ethnicity were started by the British to divide society and crush rebellions. “The Indian Army does not recruit on the basis of caste, religion or region,” the officer said.

The army has several regiments, each with its own colours, uniform, insignia and a record of its accomplishments in combat.