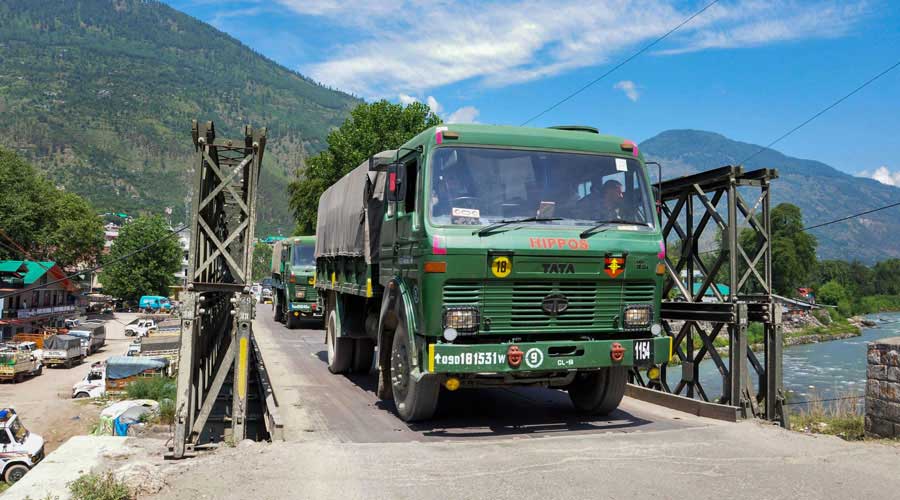 Senior officials of the army and the ITBP, he said, have been conducting regular flag march and meeting their Chinese counterparts to reduce tension which is higher than usual amid the ongoing border standoff between the two countries.
File picture
Our Special Correspondent   |   New Delhi   |   Published 16.09.21, 01:46 AM

Security agencies have identified nearly 25 sensitive spots from Ladakh to Arunachal Pradesh along the Line of Actual Control that are prone to border incursion and transgression by the Chinese People’s Liberation Army, sources in the defence ministry have said.

“These 25 spots are very sensitive and require close monitoring. Senior officials of the army and ITBP (Indo-Tibetan Border Police) have been asked to make enough deployment at border posts and also to keep a close eye on the Chinese soldiers with surveillance cameras,” said a ministry official.

Senior officials of the army and the ITBP, he said, have been conducting regular flag march and meeting their Chinese counterparts to reduce tension which is higher than usual amid the ongoing border standoff between the two countries.

“Most of the 25 sensitive spots have witnessed border incursion by the Chinese army in the past,” the official said.

Both sides often accuse each other of transgression and intrusion because of differences in perception of the LAC.

The ITBP is the first line of defence along the China frontier and it guards the 3,488km-long LAC, most of which is disputed. The Indian Army remains behind it. The frontier passes along Arunachal Pradesh, Sikkim, Uttarakhand, Himachal Pradesh and Jammu and Kashmir.

Sources in the security establishment said the latest report from the ground suggested that the Chinese PLA have made frontline formations near most of these 25 sensitive spots and are also building infrastructure, including military camps.

Sources said the home ministry has also asked the ITBP bosses to intensify patrolling in sensitive zones. At present, there are a total of 180 border outposts of the ITBP along the China frontier. Additional border posts are also being increased to maintain close vigil along the LAC.

Indian and Chinese armies have been locked in a face-off at multiple points in Ladakh since May last year. The border standoff in Hot Springs and Depsang Plains is continuing even though there has been “partial” disengagement from the Galwan Valley, Pangong Lake and Gogra, by creating a demilitarised “buffer zone” with the Chinese stepping back a few kilometres while still remaining within India-claimed lines.

The Chinese army is said to be entrenched 18km inside India-claimed lines on the strategically crucial Depsang Plains.