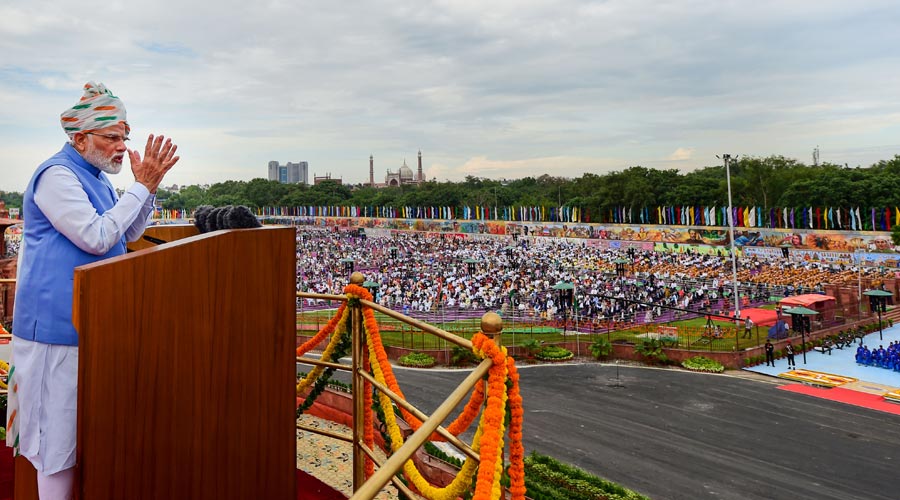 From the ramparts of the Red Fort, Prime Minister Narendra Modi on Monday saluted the armed forces for supporting his vision for a self-reliant India and made a mention of the export of Brahmos supersonic cruise missile.

In his Independence Day address, Modi also referred to the use of an indigenously developed howitzer gun for the first time for the ceremonial 21-gun salute at the celebrations.

The Advanced Towed Artillery Gun System (ATAGS) has been developed under the government's 'Make in India' initiative by the Defence Research and Development Organisation(DRDO).

"For the first time after 75 years, the Made-in-India cannon has saluted the Tricolour from the Red Fort. Will there be any Indian who will not be inspired by this sound? My dear brothers and sisters, today I want to congratulate the soldiers of the army of my country from my heart," Modi said.

"I salute the way the army jawans have shouldered this responsibility of self-reliance in an organised way and with courage....He stands firmly in the middle when there is no gap between death and life," he said.

'Salute to my army officers'

The prime minister also talked about the decision of the armed forces to not import around 300 items.

"The resolution of our country is not small when the armed forces make a list and decide not to import 300 defence products," he said.

"In this resolution, I can see the seed of a bright future of 'Atmanirbhar Bharat' that will convert this dream into a banyan tree. Salute! Salute! Salute to my army officers!" the prime minister said.

The prime minister said India is becoming a manufacturing hub and that people from around the world are coming to the country to try their luck.

"India is becoming a manufacturing hub. It is building a foundation for a self-reliant India. Be it manufacturing of electronic goods or mobile phones, today the country is progressing at a very fast pace," Modi said.

"Which Indian wouldn't be proud when our Brahmos is exported to the world? Today the Vande Bharat train and our metro coaches are becoming objects of attraction for the world," he said.

In January, the Philippines concluded a USD 375 million deal with India for the procurement of three batteries of the BrahMos cruise missile.

A number of other countries have also shown interest in procuring the Brahmos missiles.

In a related development, India signed a framework agreement with the Philippines in March that provided for government-to-government deals for the supply of defence hardware and equipment.

The government has initiated a series of measures in the last few years to boost domestic defence manufacturing.

In a major push towards defence indigenisation, the government in August 2020 came out with the first "positive indigenisation" list of 101 items including towed artillery guns, cruise missiles and offshore patrol vessels, which were put under import restrictions under a staggered timeline.

In May last year, the government approved restrictions on the import of an additional 108 military weapons and systems such as next-generation corvettes, airborne early warning systems, tank engines and radars under a timeline of four-and-half years.

In April, a third list of over 100 military systems and weapons were put under import restrictions under a staggered timeline of over three-and-half years.

The defence ministry said orders worth more than Rs 2,10,000 crore are likely to be placed on the Indian industry in the next five years as part of the items covered in the third list.

India has been one of the largest importers of arms globally. According to estimates, the Indian armed forces are projected to spend around USD 130 billion (one billion is equal to 100 crores) in capital procurement in the next five years.

The government now wants to reduce dependence on imported military platforms and has decided to support domestic defence manufacturing.

The Defence Ministry has set a goal of a turnover of USD 25 billion (Rs 1.75 lakh crore) in defence manufacturing in the next five years, including an export target of USD 5 billion worth of military hardware.