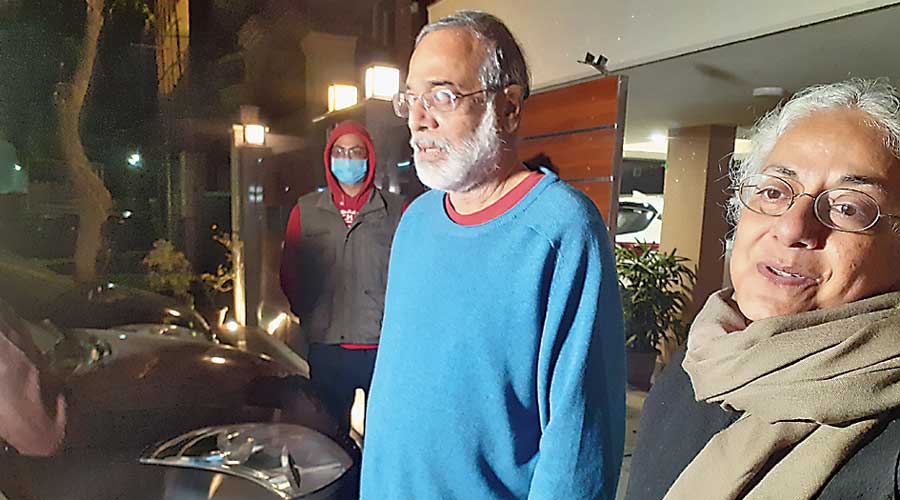 “Surveys” by the income-tax department that began around noon on Friday continued past midnight in the offices of two news websites deeply critical of the Centre.

One of these was NewsClick, whose office and employees’ homes witnessed a five-day Enforcement Directorate (ED) raid in February on charges of money laundering related to a foreign investment.

The other was Newslaundry, known for its brutally honest satire shows, Newsance and Tippani, which often lampoon pro-Centre channels.

The survey at NewsClick ended around 12.15am on Saturday while it was continuing at Newslaundry.

The two websites are among the founders of the Digipub News India Foundation, an association of online news outlets started last year that has challenged the Centre’s proposed regulations on online media this year.

NewsClick’s 71-year-old editor-in-chief, Prabir Purkayastha, was kept incommunicado at the website’s office in Said-ul-Ajaib, south Delhi, despite a recent muscular spasm in his lower back that requires him to largely remain flat on his back.

“For the last few days, he has been in pain and on medication for a muscular spasm over his lower spine. He is required to lie down flat on his back for it to heal,” author Githa Hariharan, who stays with Purkayastha, told The Telegraph.

“Around noon, he got a call from a colleague that IT (income-tax) officials had come to the office. Prabir was lying on a hot pack then; yet he got up, bathed and left around 12.45pm.”

Hariharan added: “Prabir was only allowed to talk to me on the landline once today for less than a minute. An IT officer came home with the NewsClick staffer to take Prabir’s mobile phone, which he had left at home to charge. I told him on the intercom that Prabir is in his 70s and has a back spasm. I sent the hot pack along with the phone.”

After the survey ended, Purkayastha told The Telegraph: “The adrenaline seems to have helped with my back’s recovery.”

He added that his mobile phone was impounded as the IT sleuths claimed that they were unable to download its data. Copies of hard disks of computers were taken, as well as two cartons of documents.

“I was asked 40 questions, and made to sign on a notebook impounded that had doodles and some torn pages, so the IT department wouldn’t be held responsible for the torn pages.… The government machinery has a mind of its own. It is unfortunate that I was made to come to the office despite my back problem,” said Purkayastha, who was seen earlier in the evening sitting in a chair, with an orthopaedic support belt, inside the office.

Surabhi Ahluwalia, commissioner of income tax (media and technical policy), told this newspaper: “No searches; only surveys are going on…. I don’t know the specific details of this case but ordinarily, when a survey is on at anyone’s premises, the person concerned has to be there until the operation concludes.”

She said the two publications were being investigated for unrelated cases of tax evasion, but did not reveal details.

A “search” requires more documentation than a “survey” and can be carried out on private or professional premises of a tax assessee. A “survey” is carried out only at a commercial establishment.

During a search or survey, an assessee is permitted to call a doctor but is normally not allowed to leave unless he or she needs hospitalisation.

In the evening in the NewsClick office, with Purkayastha were editor Pranjal Pandey, Prasanth R, an editor of the Peoples Dispatch, a news website that functions from the same building, and about 20 others. Purkayastha and Pandey are also directors of the company that owns the premises.

A NewsClick source said that income-tax officials had visited Hariharan three times during the day to collect electronic devices belonging to Purkayastha.

NewsClick faces a Rs 100-crore defamation suit filed by the Adani group. It is also being probed by Delhi police’s economic offences wing (EOW) and the ED.

The ED’s case is based on an FIR registered by the EOW last year that accuses the firm of violating foreign direct investment (FDI) rules by receiving Rs 9.59 crore from a defunct US-based firm, Worldwide Media Holdings LLC, in 2018.

NewsClick has underlined that this investment was received before the FDI cap of 26 per cent was imposed on digital media in 2019.

Purkayastha, a CPM member, was jailed during the Emergency. He suffers from hypertension, diabetes and asthma. In July, income-tax sleuths had questioned him for five hours for alleged tax evasion on the same FDI.

NewsClick is currently under the protection of Delhi High Court from coercive action by the ED and the Delhi police, and has asked the court to quash the cases.

Last month, the high court questioned the police’s opposition to anticipatory bail despite a report from the Reserve Bank that the company had not violated the Foreign Exchange Management Act.

The “survey” at Newslaundry’s office in Sarvodaya Enclave, south Delhi, began at 11.30am. Its CEO, Abhinandan Sekhri, was being kept inside without access to his mobile phone.

A colleague of Sekhri told this newspaper: “We have complied with all rules and responded to any queries from IT…. This government survives on media control. Newslaundry has been challenging that very control, punching holes in the mainstream media narrative.”

Both websites functioned through the day. Two women employees of NewsClick were allowed to leave after sunset as no women officials were part of the income-tax team.

Congress spokesperson Shama Mohamed tweeted: “Income Tax officers visit the offices of news sites NewsClick & @newslaundry today, calling it a ‘survey’ & not ‘raids’. Call it by any name, this is nothing but an undisguised attempt to bully independent media! This is BJP’s governance by intimidation!”

As his popularity sinks, Modi moves towards his Gujarat-2002 form — Unleashes Income Tax & Enforcement raids on NewsClick & Newslaundry — digital media critical of him. Who’s next? https://t.co/cw7EqLjn8p

Gujarat MLA Jignesh Mevani tweeted: “After raiding the VTV Gujarati office yesterday, a fierce critique of Rupani government’s anti-people policies, the Modi government has targeted News Laundry and News Click today. The intimidation tactics are back! What are you so afraid of Mr @narendramodi?”

The intimidation tactics are back! What are you so afraid of Mr. @narendramodi?

Delhi chief minister Arvind Kejriwal, who had tweeted his protest when Dainik Bhaskar and Bharat Samachar faced income-tax raids in July, kept mum. He participated in a televised Ganesh puja promoted by his government as the “surveys” rolled on in the evening.